Guwahati is not really a tourist destination. But it is the entry-point to the seven northeastern states of Assam, Meghalaya, Arunachal Pradesh, Nagaland, Manipur, Mizoram and Tripura and therefore is an important hub. In our 11day stay in that region, we stayed 4 nights in Guwahati, out of which 2 nights were just in transit. We saw very little of the city and found that what we liked most about it was a restaurant where they served the best Assamese food ever! Apart from that, it was just a city from where we could connect to other parts of Assam or get in/out of the northeast.

The day we flew into town, we checked into a hotel on the Guwahati-Shillong Road near Paltan Bazaar, had a late lunch and then immediately engaged an auto-rickshaw to take us to the city’s most famed attraction: Kamakhya temple. Since the temple is located about 3kms from town atop a small hillock we asked the auto guy to wait while we visited it and then bring us back to our hotel. At the top of the hillock, we were saddened to see that the temple complex was completely surrounded by a bunch of unsightly concrete structures. But since it was a weekday, there were not many people around and that ensured us a peaceful visit.

Built in the 16th century, the 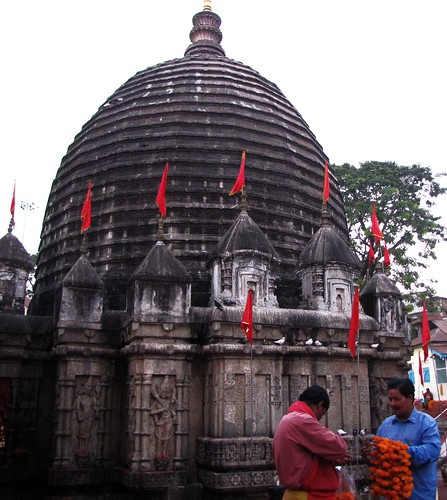 Kamakhya temple has a very unique architecture: its shikhara has a beehive like shape and looks completely unlike any temple we had seen so far in the country; it was very impressive! The temple consists of several chambers with smaller shikharas in addition to the main one. Unfortunately, apart from the beehive shaped one atop the inner sanctum, the rest of the temple’s outer walls have been painted in pale yellow with dark brown hues on the top. This completely takes away from the carvings on these walls and makes them look quite unremarkable. Thankfully, the carvings on the outer walls of the inner sanctum still stand pretty and look gorgeous! As we walked around the temple complex we saw several goats and lambs loitering around begging for food amongst the visitors. They were possibly being raised to be sacrificed later during festivals – the temple is quite famous for this. We enjoyed the walk around the complex but it cost us an entry into the inner sanctum: the doors closed for the evening while we were strolling.

The following day we left for Meghalaya and then returned to Guwahati on the night of January 7th to stay for 2 nights before proceeding towards Assam’s national parks to the east. To while away the day in between we had two options: visit the temple at Hajo some 30kms away or the ruins of the Madan Kamdev temple some 35kms away. Since our internet data card didn’t have any coverage in Assam, we couldn’t research these sites online and had to rely on the guidebooks, which said that the latter was ‘Assam’s answer to Madhya Pradesh’s Khajuraho temples’. This piqued our interest considerably and therefore we chose it over the former big mistake!

Since there was no scope of getting public transport to the remote ruins we hired a cab for Rs.1100 to take us there and back. En route we noticed that the roads around the city were still under development causing the countryside to be coated with dust and grime – not a pretty sight! Our driver had never been to this temple so we had to ask around and even backtrack a bit before finding the village road that led to it. At the entrance to the road, I was happy to see a sign by the Archaeological Survey of India (ASI) dept announcing the temple as a monument of national importance. This gave me hope that the temple premises would be nicely maintained and preserved – they usually do a good job. However, our first disappointment came when our car was stopped by a bunch of young men who rudely demanded a donation for the local temple pooja. Our driver tried to reason with them that as visitors we weren’t obliged to give anything but they didn’t relent. The men looked a little too rough for us to mess with so we paid up without protesting and continued on. Then outside the gates of the temple complex another bunch of men stopped our car and demanded a parking and entry fee of Rs.30. Madhu asked if they were affiliated to the ASI or to any government body – they weren’t! However they claimed that they were authorized to collect this money and waved a phony-looking receipt printed in Assamese language under our nose as proof. Again we knew that there was no point in getting into an altercation with them so we had to pay up. We were in a foul mood even before entering the temple complex. Unfortunately, entering it only made it worse.

Estimated to have been built between the 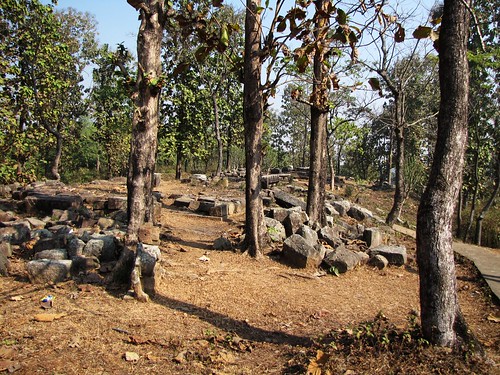 10th and 12th century by the Pal dynasty, the Madan Kamdev group of temples’ origin is not really known. Nor is it known how it came to ruins. We had expected at least some semblance of a temple to remain at that site but were utterly disappointed to see all that remained was a rubble of stones piled together in a forest of teak and sal trees. Each pile marked the site at which the original temple had stood. We were appalled to see that there was no security or fence to guard these ancient stones. Anybody could just pick them and walk out without a problem. In fact I think what is now remaining at the site is just the stones that no one really wanted ‘coz we didn’t see any Khajuraho-style carvings on them – the nicer ones may already have been looted.

Back at the parking lot we noticed that a couple of buses full of locals had suddenly arrived to picnic in the open grounds nearby. They were a boisterously noisy group that had settled amongst the trash strewn everywhere to play games and cook their afternoon meal. It was sad to watch the premises of a monument of national importance being treated so shabbily.

On our way back to town we wished we had chosen to visit Hajo instead but it was too late. In Paltan bazaar, on my brother’s bro-in-law’s advice (he grew up in Guwahati) , we shopped for ‘Naga gowns’. They are a thick-cotton-mixed-with wool version of bath robes that can be worn at home during the winters to stay warm. We had seen him wear one and had really liked its practicality, design and colors. Several shops lining the street across from the Assam State Transport Corp’s bus stand stock these robes. We bargained as much as possible and then bought about 4 of them for an average price of Rs.405 each – we think it was a good deal. The shopping experience helped us get over the disappointment of the day.

Our last night’s stay in Guwahati was just to catch a flight to Kolkata the following day. This time we relaxed in the room and then went out to our favorite restaurant, Khorika, for our last meal of Assamese-style barbecued chicken – unbelievably yummy! Definitely not a bad end to an otherwise disappointing Guwahati stay!