After visiting the serenely fabulous Nameri National Park, we had high expectations from Kaziranga National Park, especially since it is listed as a UNESCO World Heritage Site. Thankfully, we weren’t in the least bit disappointed. In fact, we are now quite convinced that whoever is running Assam’s National Parks department has a passion for the job and doing it really well – hats off!

On the morning of Jan 11th, we hired

a cab from Nameri to drop us off at the lovely Wild Grass Hotel, which is some 3kms beyond the national park entrance at Kohora. We got there at around 1:30pm and such was our excitement that we immediately signed up for the 3pm elephant safari that day. After checking in and a hurried lunch a guide from the hotel escorted us in a jeep ride to the national park where we were rushed to the elephant-loading point; we had made it just in time! Madhu and I were seated on a gorgeous 14yr old male elephant with a friendly mahout in the front and then we set off!

Unlike most of the forests and national parks 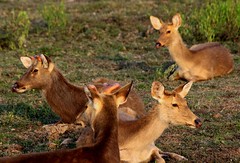 we’ve been to thus far, Kaziranga National Park’s landscape comprises mainly of vast open grounds with patches of tall ‘Elephant Grass’ and a few scattered trees. This makes for easy sighting of deer (Swamp Deer and Hog Deer), wild boars and of course, the one-horned rhinos. What makes a one-hour elephant safari much more preferred than the regular jeep safaris is its languid pace and ability to get real close to the animals without scaring them away. We were completely amused to see the deer stand their ground and watch us intently as we inched closer on elephant-back; it was the closest we could have ever gotten to them outside of a zoo enclosure.

Our first sighting of a Rhino was understandably very exciting! Its sheer magnitude and hulk was awe-inspiring! Our elephant and a couple of others managed to encircle a couple of male rhinos and we were able to observe them up-close for a long time. 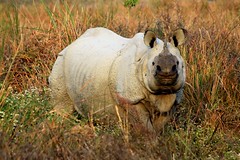 One of them was a little skittish and tried to slink away from us while the other stood around chomping on grass, ignoring us completely. Our mahout said that these guys may mock-charge if irritated or followed around for too long. The thought of an animal of that size charging, even as a warning, can be downright scary; gladly the ones we were following were in a peaceful mood!

The national park’s conservation work has gone so well that it has over 2000 rhinos today. During our 2-night stay, Madhu and I went on 3 elephant safaris and 1 jeep safari. After the initial excitement of spotting a rhino, we soon started to tire of seeing them – they were everywhere, almost as common as the cattle grazing on the parklands; very impressive in terms of conservation effort!

The morning elephant safaris turned out to 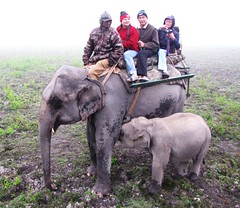 be quite different from the afternoon one because of heavy fog conditions. The hotel guide warned us that we could be disappointed as visibility is low but we actually enjoyed the atmosphere a whole lot. The hazy, serene morning air added a touch of drama to our wildlife spotting tour, which was quite fun. However, the serenity of our 2nd morning’s elephant safari was a bit destroyed as, being a weekend morning, there were many other safari goers alongside and they weren’t exactly a quiet bunch. Nonetheless the presence of 3 unbelievably cute and charismatic elephant calves made our trip completely worthwhile!

The babies followed their respective mothers on the safari and kept us entertained throughout. About half-way into the ride, the mothers stopped to let them suckle on them for a bit before continuing on. One cutie that was following his mother right in front of our elephant was suddenly scared by a sprinting deer that crossed his path. When he yelped in surprise and shock, his mother instinctively turned around and let out a frightening and protective roar! Watching this was probably the finest moment of our elephant safari that day!

Later as we alighted from our elephants, the three calves went around presenting their trunk-tips to each and everyone as if to say hello; they were so darn charming! Madhu and I stood around for quite a while enjoying their moves before reluctantly heading back to the hotel.

Most guide books suggest that elephant 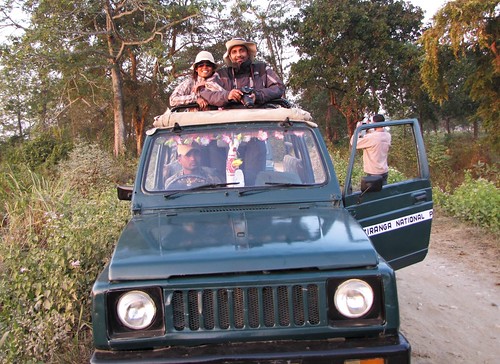 safaris are the best way to enjoy the national park and jeep tours could be avoided. But after going on a jeep tour we feel that it allows the visitor to see more of the park and its wildlife – it definitely cannot be missed! Our hotel arranged the jeep and permits for us and we took off on a 3hr safari that turned out to be much more exciting than we imagined!

Kaziranga National Park has about 90 Royal Bengal Tigers but spotting them is quite rare as it’s easy for them to find hiding spots amongst the tall grassy patches. Spotting them on elephant-back is rarer than on a jeep safari when one could be spotted in the distance. And that’s exactly what happened! Within the first hour of our safari, as our jeep hurtled through the forest on a designated route, our watchful guide suddenly asked him to stop and back up a bit. In the far distance he had spotted a resting tiger by the shores of a large water body! We were shocked at his discovery! The tiger, a huge male, could only be seen clearly through a pair of powerful binoculars but not with the naked eyes. Our camera lens, which weren’t as powerful as the binoculars, could not capture a good picture of the graceful animal; try spotting it in the picture below.

While we watched with utter excitement, the tiger rose from the banks and sat himself in the shallow waters as if to cool himself. And then as our jeep tried to get closer for a better look and as more jeeps started to drive up, it abruptly stood up and walked into a huge thicket of bushes, completely moving out of sight! We waited with the other safari goers to see if it shows up again but it didn’t! As it turned out, we were the only ones that day to have spotted a tiger!

Later we spotted a large herd of wild

elephants and water buffaloes but after the tiger-sighting they didn’t seem all that exciting. Nevertheless they were all beautiful and looked completely at ease in those gorgeous surroundings – it was a fabulous safari!

Looking back, we would highly recommend visitors to stay at least 2 nights near the park, and go on two elephant safaris – one in the afternoon and one in the morning, and one jeep safari. This would ensure a perfect visit just as ours had turned out to be!