Nameri National Park, in the foothills of the Eastern Himalayas

Assam’s fertile Bramhaputra valley is home to numerous forested areas that are in turn home to some fabulous wildlife. Much of this region has been converted to national parks and forests in order to preserve and protect them. Nameri National Park, Kaziranga National Park and Manas National Park are the most popular of them with Kaziranga and Manas listed as UNESCO World Heritage Sites. We wanted to visit all three but eventually dropped Manas from the itinerary. Of the other two, we visited Nameri first and it turned out to be a fabulous introduction to Assam’s beautiful forests.

Located about 35 kms northeast of Tezpur, on the northern valley floor of the Brahmaputra, Nameri National Park is considered to be a birder’s paradise with over 300 species of birds. It’s most famous for the Hornbill, which, unfortunately we couldn’t spot during our 2 night stay there. From Guwahati we took a bus to Tezpur (long and tiring!) and then a cab to Nameri Eco Camp where we had called in advance for a tented accommodation. We got there at about 4:30pm and then spent the rest of the evening making arrangements for the following day and lazing in the lovely camp grounds.

At 6 AM the next morning, escorted by an 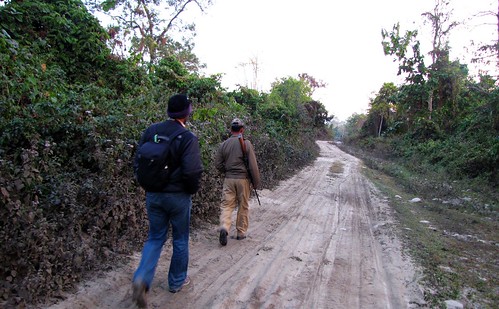 armed forest guard-cum-guide we set off on a 3 hr walk through the Nameri forest. From the Eco camp we walked about a kilometer to a river and waited at its banks for a couple of forest officials to come by in a boat and ferry us across. While we waited we couldn’t take our eyes off the fabulous sunrise and the unbelievably gorgeous landscape. With no one around but us, there was a certain calm in the air that was very soothing; loved it!

Across the river, we trudged over loose sandand about a 100 meters later came upon the forest officers’ quarters, which is located at the entry point into Nameri National Park. From here on our walk took us through a lush 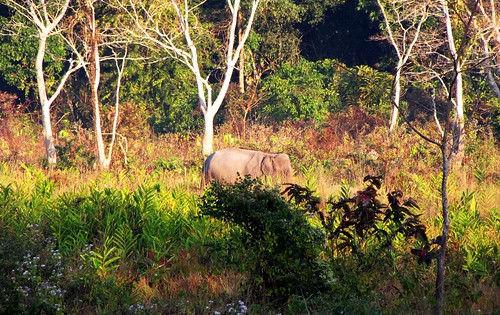 forest that was filled with sounds of invisible birds; it was plain intoxicating! Right at the outset our guide spotted a young, wild elephant that was trying hard to blend into the surroundings and stay hidden and it did a pretty good job as it stood still watching our movements.

For 2 hours we walked through thickets of grass,wooded trails, across tiny streams, skirting huge mounds of elephant poop while enjoying the fresh morning air. We spotted plenty of birds and were regaled with their calls throughout the trail. Our guide pointed out a tree against which the elephants scratched themselves – the bark of the tree had been smoothened out completely. As we neared a watering hole he slowed his pace, held the gun in a ‘ready-to-aim’ stance and crouched amidst the tall grass that lined the banks of 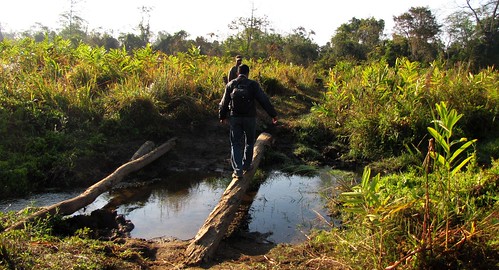 the water; it got our pulses racing! He was sure that there would be some wild elephants nearby. Sadly, there were none¦

The trail eventually looped back to the forest officers’ quarters where we made an entry in the visitor’s log and paid for the required permits before continuing on. In the far distance we saw a large herd of water buffaloes by the river banks. They were the only wildlife we had seen that morning apart from the wild elephant! As we were ferried to the other side and made our way back to the camp, not a least bit tired from the 3 hr walk, I realized that this had probably been one of our finest mornings of the trip!

At the camp we spent a leisurely hour over a heavy breakfast and were lounging over cups of black tea when we were told that all arrangements for our next activity, rafting, was ready. So after freshening up quickly, we set out on, what I look back as, one of the most memorable days of our travel.

The rafting trips organized by the camp takes visitors upstream (some 10kms) by road, puts them in tiny rubber floats that are then paddled downstream by 2 local men who act as guides. This can be a 2 hr trip 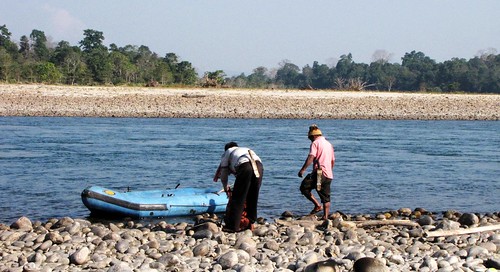 or a longer one like ours, which includes lunch on the river shore cooked and served by the guides. Total cost of transportation to the rafting start point, 2 guides-cum-cooks, food, rafting equipment and permits was about Rs.2000. A jeep was to take us upstream but the manager had difficulty finding one because of sudden state-wide strike. In the end he conjured up a truck for the job. He placed us in the front with the driver and then had two armed forest guards (in case of trouble) seated on the truck bed along with our guides and a bunch of locals who needed a ride. Needless to say it was an interesting ride ¦

At the drop-off point, the guides immediately 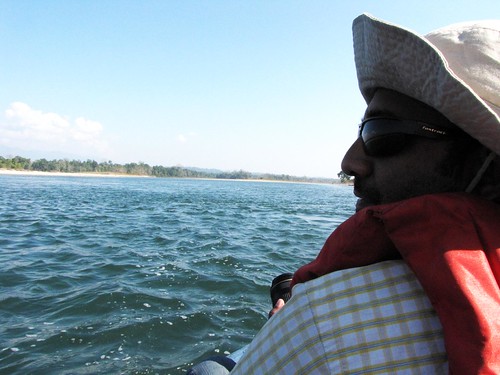 got to work bringing the rubber floats to life by pumping air into them. They handed us life-vests and then had us sit on two planks balanced precariously across the tiny raft while they seated themselves at the back, armed with paddles. As we floated out to the middle of the river and let the current carry us along, it was the most glorious thing ever! The day was perfect too – sunny, bright and warm! The river had gentle rapids that scared us (especially me!) at first but we were soon looking forward to the next one and enjoying it tremendously. The only thing we had to worry about was not letting any water splash on to our cameras.

We spotted many birds along the wayespecially kingfishers, herons, ducks and even an eagle. Since Madhu and I are not really avid bird-watchers we couldn’t make out the different types we saw. But they

were all gorgeous and added to the unbelievable landscape around us.

At around 1:30pm, just as we were nearing theEco camp, our guides paddled us ashore and announced that we were going to stop there for lunch. They had stopped a few minutes earlier on to collected firewood for cooking and now told us that we could walk around while they set things up for us. Happily, Madhu and I shrugged off the life-vests 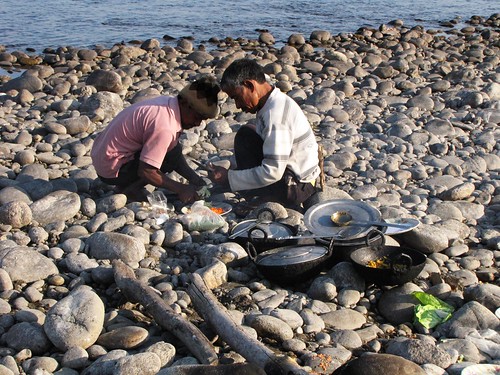 and explored the banks until we found a large piece of driftwood to park ourselves on and relax. I just don’t have words to describe how beautiful that place was! One and a half hours simply melted away and at 3pm we were served a fabulous meal of rice, dal, vegetables, salad, pickles and chicken curry – it was fabulous!

Later we got back into the raft and were dropped off at the same point where we had taken a ferry across to the entrance of the national park in the morning. From there we opted to walk back to the camp instead of waiting for the jeep that was to pick us up. This time we walked slowly and leisurely enjoying our last few minutes in those wonderful surroundings.

Apart from walking through the forest and rafting in the river, there’s nothing else to do in the Nameri National Park. Our 2-night stay there had been just perfect! The following morning, fortunately, the state-wide strike was called off, which allowed us to check out of the Eco camp and continue with our Assam travel.

Getting Here:
Air: Nameri is about 190 kms from Guwahati Airport which has regular coming in from Delhi.
Rail: The nearest railway station is Rangapara (81 kms from the park).
Road: Take a cab from Tezpur, which is well connected with all the major cities of Assam.