In a dusty, bustling, corner of the Indian state of Bihar, there is a magical place that one might think of as the hub of Buddhism. Attracting pilgrims from around the world, the site of Prince Siddhartha’s enlightenment is venerated by many. One thing is certain – Bodhgaya is a testament to the peaceful coexistence of many traditions, the survival of outward representations of faith, and an abiding sense that something holy transpired at that very spot.

There are two distinct aspects to experiencing Bodhgaya. 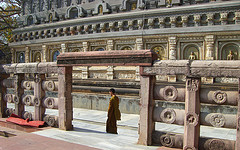 The first is the massive stupa, a structure housing holy relics and the grounds that surround it. Known as the Mahabodhi temple, its earliest incarnation was a throne constructed somewhere around 250 BCE by Emperor Ashoka who wished to memorialize the spot of Buddha’s enlightenment. The 180 foot temple that now dominates the site was built in the 5th-6th centuries CE, but fell into grave disrepair after centuries of Buddhism languishing in India as various Hindu and Muslim dynasties held sway. In the 19th century, the remains 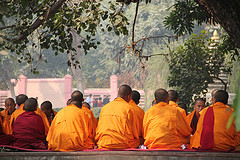 of the temple were excavated and restored by a British archeological team. Surrounding the temple are terraced paths, dozens of smaller stupas, and protected inside a guardrail, is the famous Bodhi tree under which Prince Siddhartha sat, only to rise three days later, a Buddha. 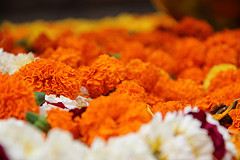 practitioners in black, and everywhere, Tibetans—both lay people and monastics—prostrating themselves over and over. People chant, read scriptures, pray, clack mala beads, and circumambulate the stupa. Rituals are conducted, offerings are made, and smiles are exchanged between people with no common language except “Buddha”. Sprinkled in among the faithful are the merely curious who come to look and experience, to take photographs, and who soon find themselves awash in positive feeling. They too are welcome.

The best way to experience it is to spend

at least one entire day on its grounds. Begin early, in darkness when the shops outside the grounds are quiet. The flower vendors will be arriving, and for a few rupees you can purchase beautiful garlands of fresh flowers, or plates of vibrant marigolds to offer. Traditionally, one circumambulates in a clockwise manner on the highest path. Then you can descend the steps leading inside the temple.

The interior of the temple is surprisingly tiny for the grandeur of the exterior structure. No more than a dozen people can fit in the most sacred of spaces. After paying homage, one may find a spot someplace outside to watch, meditate, pray—you might catch a leaf that falls from the Bodhi tree, share someone’s cookies or fruit, or just take the time to breathe. Undoubtedly you will make a new friend before the day is over, and as night descends, and the lights on the grounds begin to twinkle, find yourself thankful for being in Bodhgaya—if not enlightened.