When the general Bakhtiyar Khiliji, a Turkish commander of Afghani origins, conquered the Indian state of Bihar, it is said that he ransacked one of the greatest universities the world has ever known. Nalanda University, one of the five great institutions of Indian Buddhism, was brought to its knees in the late 12th century after serving as a center of learning for more than six hundred years. Its great library, nine stories tall, was reported to have burned for several months after being put to the torch. And when the Tibetan Buddhist scholar and translator Lotsawa visited the site in the year 1235, he reported that he found only one ninety-year old teacher, and seventy students. At its prime, Nalanda housed two thousand teachers and more than ten thousand monastic students.

Founded during the Golden Age of ancient 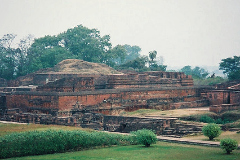 India, the era of the Gupta Empire, Nalanda was a center for various kinds of learning: science, art, medicine, astronomy, and preeminently, the philosophical disciplines: logic, epistemology, metaphysics, and ethics. Debate was the consummate form of intellectual inquiry, and students were taught both to think independently and to support their suppositions rationally. Intellectuals came from as far away as Tibet, Greece, and Persia. Known for the discipline of its monastic scholars, and governing itself through consensus, Nalanda was, at the very least, 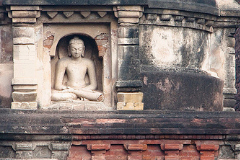 a place of enlightened thinking. Mahayanists, Buddhists who believed in seeking liberation not just for self but for the benefit of others, held sway during the university’s last three hundred years.

Today, the excavated grounds seem to echo with the voices of debating scholars. Thanks to two separate periods of archeological work, first from 1915-1937, and again from 1974-1982, one can see the remains of six, significant, red brick temples, and eleven monastic dormitories. The modern floor plans and features are 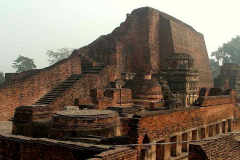 fascinating: sleeping cells, communal kitchens, granaries, wells, and verandas. There are meeting and devotional spaces, and even hidden safes for valuables. There were gardens, paved walkways, and well-engineered sewers. Stairs led to rooftop spaces, and it takes little to imagine the grounds full of life.

One of the most impressive constructions at the site is the Sariputra Stupa, said to hold relics of the Buddha’s disciple, Sariputra. The structure is quite large, and reminiscent of a pyramid in structure. It has seven 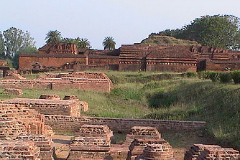 levels of construction, and the original small stupa is hidden somewhere deep within. Statues in recessed niches depict the Buddha and his disciples in various poses and scenes. Surrounding the main stupa are various other small stupas, the repositories of holy relics and remains. Around it all abides a sense of peace.

The great Buddhist scholar of the 8th century, Shantideva, is said to have secretly attained ultimate liberation at Nalanda, his enlightenment only coming to be known with a display of miracles during – what else — an academic test. The author of one of the most beloved texts of Mahayana Buddhism, The Bodhicaryavatara, or The Way of the Bodhisattva, famously made the following request his prayer: “As long as space abides and as long as the world abides, so long may I abide, destroying the sufferings of the world.”

At least Nalanda continues to abide, a silent testament to the aspirations of those who studied there.