Maybe it’s the heat, but Madhu and I have had a real tough time waking up on time (before 8am) here. We’ve been lethargic and lazy so by the time we manage to leave the air-conditioned comforts of our hotel room, it has been terribly warm outside making us more inclined to stay indoors. Today we planned to cover the Chandigarh Gardens and the Government Museum and Art Gallery. 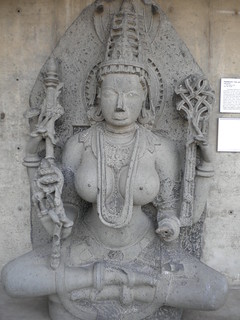 Chandigarh Government Museum and Art Gallery is situated in a large campus in Sector 10. The campus houses the National History Museum and the Chandigarh Architecture Museum as well. What makes the Art Gallery unique is that it was designed by Le Corbusier. It’s an imposing structure; not artistically beautiful but simple and austere. The artifacts in the museum originally belonged to the Central Museum at Lahore. After partition, like everything else, the contents of the museum were also divided between the two countries, with India getting about 40% of it. This share was first housed in Amritsar, then Shimla, then Patiala and then finally (and rightfully!) in Chandigarh.

Our cycle rickshaw dropped us off at the entrance of the campus from where we walked over to the museum. The campus has been liberally planted with several trees, giving it a nice, breezy feel. However, they were not enough to provide shade from the vicious sun, so we literally ran from the entrance gate to the shade of the museum building. Beautiful, stone sculptures decorate the shaded, pillared porch of the museum. We’ve seen artifacts being placed in the porch or gardens at other museums as well. Madhu and I have always wondered why the curators leave such priceless art outside the protection of the museum buildings. Do they get moved back into the building at the end of the day? I doubt it.

No bags are allowed into the museum, so I had to leave my daypack at the reception desk. When they 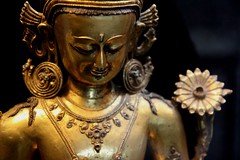 ominously asked if I had anything valuable in the bag, just to be safe, I took out my wallet and held on to it while touring the museum. Just like its facade, the museum’s interiors are also simple with high ceilings and a minimalist feel. The first section we walked into contained textiles from the north-west region of India and these were quite exquisite. Unfortunately, they were all housed behind glass panels, which were in desperate need of some cleaning. Then there was the usual collection of brass sculptures, coins and miniature paintings. These were all wonderful. However, my favorite section was the one that 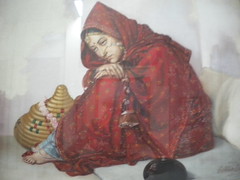 featured prominent, 20th century painters from this region such as Amrita Shergill and Sobha Singh. It had some of the nicest paintings I’ve seen in a while; made my day!

Right next door to the Art Gallery is the Chandigarh Architecture Museum. So we hopped over out of sheer curiosity. As soon as we entered through its massive doorway, an ugly stink filled my senses; I knew that there was an unclean toilet somewhere on the floor. This put me off considerably and I almost immediately lost interest in seeing the rest of the museum. But not wanting to walk out without at least a cursory glance, I held my breath and continued on.

I was surprised to learn that the museum was inaugurated as recently as 1997 – it surely didn’t feel new! It documents how Chandigarh was designed and laid out by its master planners. There are photographs of the area before development, details of the expenses, biographies of the architects, detailed design documents, etc. The 2nd floor (not as stinky) contained more information regarding how each sector was designed and why. It was interesting but not something that kept our attention for long. I guess students of architecture must find this place fascinating. As for me, I was happy to leave after a few minutes.

Across the campus from the Architecture Museum is the Natural History Museum. One of the best Natural History museums we’ve been to was the Manav Sangrahalay in Bhopal. We knew the one here would never match up to that; it didn’t look very inviting from the outside either. So we decided to skip it and headed out for a late lunch. We took a cycle rickshaw to Sector 17 and ate at another locally popular restaurant called Ghazal. After lunch, we walked around Sector 17’s shopping area for a while, ate some paani-puris (for which there is always space in my tummy) and then, exhausted from the heat, decided to get back to our hotel rooms and rest; it was a short day of sightseeing.

Today, our 4th and last day in Chandigarh, we decided to check out the acclaimed  Capital complex designed by Le Corbusier. Since our flight out was only at 7pm, we struck a deal with the hotel guys to let us keep the room until 5pm (for an extra charge, of course!) and then headed out to see as much of Chandigarh as possible before leaving.

Most cycle rickshaws we tried to flag down had no idea where the Capital complex was. One guy who finally agreed to take us to take there only had a vague idea of where it was. This made us wonder – if the cycle 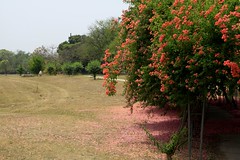 Bougainvillea Garden’. The cycle rickshaw guy said that the Capital Complex was somewhere around here. Since the garden looked pretty, we decided to check it out before heading out in search of the other.

Opened to the public in 1976 and spread over 20 acres, Chandigarh’s Bougainvillea garden is said to have about 65 varieties of Bougainvillea. It’s truly a wonderful, colorful park! Creepers full of flowers grow over arches and small pavilions giving the place a very majestic feel! I found pink, peach, burgundy, lavender, white and yellow bougainvillea flowers – they were all gorgeous, though I loved the peach ones the most! Fitness tracks have also been laid for joggers and walkers.

In the center of the garden is a large war memorial to commemorate the martyrs from the north-western states of Punjab, Haryana, Himachal Pradesh and the union territory of Chandigarh. Names of the martyrs, 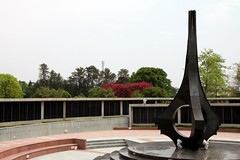 their regiment, cadre and age, categorized by the war they were martyred in, have been engraved on large marble slabs that have been placed on walls that wind around a central sculpture. It was beautiful, yet a little overwhelming; so many youth from this region had laid down their lives for their country!

After touring the garden, we asked another cycle rickshaw guy to take us to the Capital complex. It turned out to be in the neighboring sector and not very far away. But as he rode us there and neared the complex, we realized that the place wasn’t as grand as we had imagined it to be. It was just a cluster of large, multi-storied, grey buildings that housed the High Court and Secretariat. Architecturally it wasn’t really pretty! Moreover, the place was crowded with people going about their official business and it didn’t look tourist-friendly at all. Disappointed with this, we asked our cycle rickshaw guy if there was any other place worth seeing in Chandigarh. He mentioned 2 gardens – the Rose Garden and Shanti Kunj; we asked him to drop us off at the former.

Named after India’s former president, Dr. Zakir Hussain, Zakir Gulab Bag was established in 1967 and is 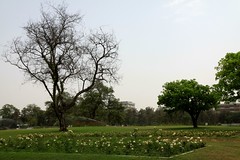 considered to be Asia’s largest Rose garden at about 42acres. It is in Sector 16 and seems to be more popular than the Bougainvillea garden, which hardly had any visitors. Here there were plenty of young couples and families chilling on the grassy lawns and shaded benches. And why wouldn’t they! It was such a lovely, serene space with rose plants as well as large trees to provide shade. The roses were of different colors and variety. In fact, it is said that the garden has 47000 plants representing a whopping 1600 varieties of roses!

Just as we exited the rose garden, we saw the entrance of the other garden, Shanti Kunj, across the street. As we crossed over, I felt extremely envious of Chandigarh residents. Apart from Delhi, 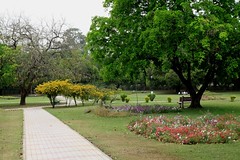 I’ve rarely seen any other Indian city with so much green space. That combined with the beautifully planned streets and neighborhoods, must make Chandigarh a really good place to live! Shanti Kunj, inaugurated in 1978, is a lovely, green space landscaped with plenty of plants and flowering trees. It’s called Shanti Kunj because the area is supposed to be free from any noise pollution and therefore offers a peaceful environment to relax in. A stream supposedly runs through the garden but we only saw a dry bed – post-monsoon this place must look gorgeous!

The first 2 days in Chandigarh had been a little boring but today, after visiting its lovely green spaces, we’ve got a good feel of the place. The quality of life here seems much higher than that of the ordinary masses in other cities of India. How I wish we had more of such carefully planned townships!

Tonight we are heading back to Bombay to spend time with family, celebrate the Malalayali New Year – Vishu – on April 15th with them and get the last installment of our paperwork complete. In a way, I’m happy to be going home but I really wish we didn’t have to. Time has been flying by and now suddenly Madhu and I feel like there’s still SO much more left to see in this country. We don’t want to run out of time. We’ve promised ourselves that we won’t lounge around at home for too long and will definitely hit the road again once all our commitments are complete. Fingers crossed!