After yesterday’s crazy rush to Chandigarh and the late night at the game, we were quite exhausted. So we took it easy this morning and didn’t step out into the hot summer day until almost noon. And, oh my God, was it HOT! As we walked out of our air-conditioned room, the warm, still air hit us in the face; we knew we would not survive being outdoors for too long. So we decided to find something indoors to do – and the only options were Chandigarh’s museums!

Chandigarh is India’s first planned city and is known for its layout, which was ‘designed for the people’. It has a great history! At the time of partition in 1947, when Pakistan was carved out of 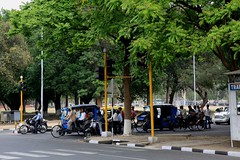 western Punjab, the then capital, Lahore, went over to the other side. So Punjab in India was left without a capital of its own. Chandigarh was created just for this. The project of creating a brand new city took on great significance because of the then Prime Minister, Pandit Jawaharlal Nehru’s personal interest in it. American architect, Albert Mayer, laid out the original plan and designs but later a lot of the buildings were designed and executed by French architect, Le Corbusier. In 1966, Haryana was carved out of eastern Punjab – this was to separate the Hindi-speaking belt from the Punjabis. At this time, Chandigarh was converted into a Union Territory and made the capital of both states!

Chandigarh is laid out as a grid with each unit as a sector. Each sector was designed to have its own residential and shopping areas. The roads connecting these sectors are 6-lane, wide streets with narrow lanes for cycle-rickshaws and pedestrians that run parallel. Streets within the sectors are narrower and only allow for slower traffic. Trees have been planted generously everywhere and I read somewhere that each sector has a different type of tree. It all looked as organized and well-designed as the suburbs of any city in the US – we were quite impressed!

Our hotel was in Sector 22 and the first museum we wanted to visit, National Gallery of Portraits, was in Sector 17, which seemed to just a few blocks away. So we walked the distance. 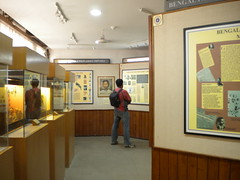 We tried to stay away from the sun as much as possible by walking in the shadow of the buildings that lined our block. But the heat took its toll and we started to tire. So when we got to sector 17 and learnt that the museum was a couple of blocks further away, we gave up and hired a cycle rickshaw. It dropped us off right in front of the museum.

Inaugurated in 1977, the National Gallery of Portraits displays portraits of India’s freedom fighters and its past leaders, showcasing their work and life. It has original documents and letters from their days as well. It was all quite interesting but also a little too descriptive – it was like going through all the history lessons from our school days in one go. There were a few figurines and scenes depicting some of the most memorable events of India’s freedom struggle but these weren’t quite well-made. We soon got bored and left.

Sector 17 is known to be one of Chandigarh’s popular shopping areas. It also has quite a few eateries, a couple of which were mentioned in the Lonely Planet. So we picked one, Mehfil, and walked over for a leisurely lunch of beer and chicken curry. We ensured that we stayed in the restaurant till about 4pm. By then the afternoon heat mellowed a bit and we felt refreshed enough to do some more sightseeing.

Madhu says that as a kid he had seen Nek Chand’s Rock Garden featured in the television series ‘The World this week’, which used to air on the Doordarshan (national) channel. He was fascinated 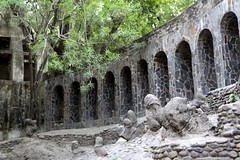 by what he saw and ever since, has wanted to visit this wonderful garden, which is supposed to have animal and human shapes made out of recycled materials. So today, after lunch, we headed there on a cycle rickshaw¦

Nek Chand was a regular Chandigarh resident who had a thing for making sculptures using recycled material that he collected from demolition sites. He chose a deserted forest land near Sukhna Lake for his work and created fantastic sculptures of animals, dancers and musicians. He did this in secrecy for nearly 18yrs before it was discovered by the authorities in 1975. His work was in 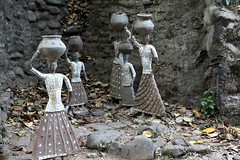 real danger of being demolished but Chandigarh residents recognized his talent and supported him completely. The govt eventually relented and opened up the forest area as a public space, giving Nek Chand a salary, title and 50 laborers to create an 18-acre sculpture garden called the Rock Garden. Today it is one of the most visited places in India; amazing!

We bought tickets at the entrance and then entered the garden through an entryway built into a stone wall. Inside, the garden slowly unraveled itself before us through walled-in, small courtyards with low doorways connecting them. Each courtyard had sculptures, which were mainly made of broken ceramics and clay pots. There were some murals made out of discarded switch-boards as well as broken bangles. It was all quite interesting; I loved the colors from the broken bangles the most. There were also some rocky water-features where most of the crowd hung about – these were the prettiest parts of the garden, especially 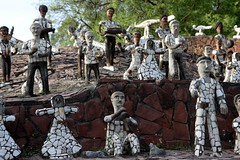 since there was quite a bit of greenery around.

The Rock Garden is truly unique in terms of the fact that it was completely hand-built by one individual and it was his vision that brought this concept (of using recycled material) to life. And that makes it definitely worth a visit. However, in terms of artistry, we were a little disappointed and felt that some of the work was quite repetitive and at times, boring.

By the time we left the garden it was almost 6pm. Madhu and I decided that we had done enough for the day; after all we have to stretch out our sightseeing activities in Chandigarh for two more days.