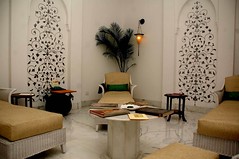 As India’s luxury segment gets more and more popular with travelers, who are craving for that oh-so-unique experience, Delhi’s flagship hotel, The Hotel Imperial Delhi, decided to give its discerning patrons yet another reason for staying with them by launching the unbelievably opulent Imperial Spa!

Opened in December 2010, The Imperial Spa spread over 16,000sq.ft of space is Delhi’s largest and is for the exclusive use of the hotel’s guests. Accessed via a lovely glass enclosure on the hotel’s landscaped gardens with wide, curving marble stairs 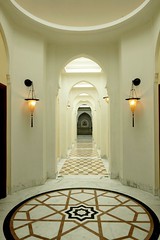 descending down to a subterranean reception lounge, the spa’s architecture is a work of genius! Right from the fact that it is built underground (saving on astronomical land costs!) to the pristine white interiors with elegant Zen-like d ©cor, the Imperial Spa feels like a timeless retreat from where no-one would ever want to leave. Needless to say, we were completely mesmerized!

The d ©cor of the spa is inspired by the Mughal era with graceful arches in the hallways, exquisite Pietra Dura work on marble and mirror-work on the walls and ceilings. Poems and phrases from the works of Sufi saints adorn the walls and make for an interesting read as one passes down the hallway to the spa rooms. A few Buddha busts and Thangkas give the place an eclectic yet soothingly elegant feel.

The retreat has 7 individual sparooms, 1 Kerala Ayurveda Suite with 2 rooms and a large Moghul suite, where couples can get massages together or brides can pamper themselves before the big day. In fact, this suite is the most luxurious spa room I’ve ever laid eyes on! It is large enough to have a private 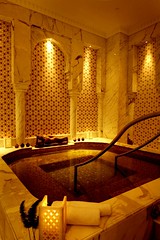 shower room, a couple of massage tables, pedicure chairs with feet-soaking tubs, a couch to lounge in and even a sauna and steam room. Its domed ceiling has intricate mirror-work and is absolutely gorgeous! There are also separate Hydro-therapy rooms for men and women. These rooms are equipped with lockers, changing rooms, shower rooms, saunas and a large soaking tub with jets. This is the perfect place to relax before, in between or after the spa treatments.

As for treatments, the Imperial Spa offers massages of all kinds including Kerala Ayurvedic ones, facials, body treatments and packages that include a fabulous combination of these – perfect for a ‘day at spa’ indulgence!. Their certified therapists include a Kerala Ayurvedic doctor who can be consulted for specific treatments. I opted for their signature massage called the Imperial Depth, which is a luxurious 90-minute full-body massage session. After filling out a form regarding my health and massage preferences, I was led to the Hydro-therapy room where I changed and spent a few minutes in a sauna before being led out to the massageroom called Jaipur. It was dimly lit and had soft music wafting about. 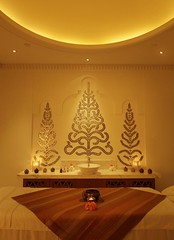 My feet were first soaked in a tub filled with warm water and salts, and dried clean. Then I was given a list of wonderfully scented massage oils to choose from, after which began the most fabulous massage ever! My therapist was a young girl, with strong yet gentle hands and she worked on my aching points with tenacity and patience. By the time I was led back to the Hydro-therapy room and served with Jasmine tea and dry-fruits, I was literally floating and loving life!

A spa is meant to relax, rejuvenate and re-balance our physical and mental being, and to that end the Imperial Spa hits the spot perfectly! Its ambience enhanced by well-trained and extremely courteous staff is the best ever and truly world-class! But then one cannot expect anything less from The Imperial, right?