Since Madhu was heading out in a couple of weeks, we decided to get a nice dinner in Delhi and zeroed in on the Hotel Imperial’s Italian restaurant San Gimignano which has a Pasta Festival (Pasta Temptations) on.

While I have been a big fan of the Spice Route, The Hotel Imperial Delhi’s signature reastaurant, this was my first visit to San Gimignano. I was intrigued by the name and decided find out a bit more – San Gimignano is a medevial walled town in Tuscany, known for its beautiful towers. Delhi’s San Gimignano, is a modern little restaurtant and since it was still early in the evening we managed to find a good table. 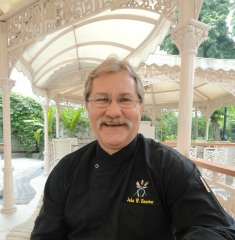 The Pasta Promotion menu had a dozen pasta dishes, almost all of which sounded exotic and scrumptious. So for once we decided to drop our gourmand air and asked for some help. Willi Haueter, the Executive Chef (who runs all the Imperial restaurants) stopped by and gave us a rundown of the menu and a few suggestions.

We started with a tomato and mozzrrella cheese and basil starter, a simple dish exceptionally well made – the mozzarella cheese was very subtly flavored, and the tomatoes very succulent. I followed this up with Pici Alla Salsiccia E Funghi (Picci pasta with sausage and mushrooms) while Madhu went for the Panesotti Di Pollo E Spinaci (Chicken and spinach filled pasta tossed in butter and sage). We paired this with some white wine – Marchesi di Barolo Gavi. The Picci was outstanding – visually well laid out, and every bit – the sausage, mushrooms,.. very well seasoned. I now have a new favorite pasta dish! The restaurant makes most of the pasta inhouse and uses authentic ingredients; all of this show. 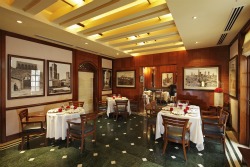 For the desert we again went with Chef Willi’s recommendation, apparently the most popular desert in the menu – a Chocolate Moelleux. It looks deceptively like a chocolate muffin, but once you slice it there is a core of liquid chocolate inside. It was a spectacular finale to a most memorable food experience.

Towards the tail end of the meal Chef Willi came over again and spent a bit of time chatting with us – before he took over as head Chef at the Imperial, he had opened/managed high end restaurants all over the world, including a couple of years in Pakistan. He is planning to organize a Mexican food festival in some time – if the Pasta festival was anything to go by, this will be one worth waiting for.