Steeped in history, a stay at Delhi’s premiere hotel – The Imperial – left an indelible mark on our hearts and minds. After being over-awed by the city’s fabulous history with unbelievably gorgeous monuments highlighting each bygone era, staying at Hotel Imperial Delhi rounded out our experience by presenting Delhi’s 20th century colonial past in all its glory and opulence with a slick, contemporary feel – we loved it!

Conceptualized by Blomfield in 1934 and inaugurated by Lord Willingdon in 1936, The Imperial was built to complement Lutyen’s grand vision of the city’s original plan. Highlighting the edifice’s importance is the fact that it was built on the second-most important boulevard of the city: Queensway, which is now called Janpath, the first being Kingsway, which is now Rajpath! Lady Willingdon took personal interest in its interiors and was also instrumental in naming the hotel. The Imperial’s effortless blend of Indian and colonial heritages provided Delhi with the perfect place for the British and Indian independence leaders to meet and discuss the country’s future.

The Imperial’s architecture, a unique 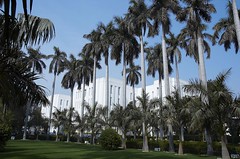 blend of Victorian, colonial and art deco, has stood the test of time as a true masterpiece, wowing visitors from the day it first opened its doors. Spread over eight acres of land with sprawling lawns surrounding a hash-shaped colonial structure, the hotel oozes charm and sophistication. 24 King Palms line the avenue that led us from its main gates to the shaded portico – we were duly impressed!

Stepping into the hotel lobby is like stepping into a grand museum! From framed wall art to plush Victorian upholstery and antique Indian handicrafts, the hotel has the most enviable collection of masterpieces ever! 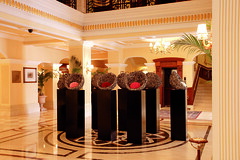 As we walked along its corridors admiring the bronze idols and framed Daniells and Frasers that lined the walls and corners, I couldn’t help feeling like I was in someone’s luxurious palace where every piece of d ©cor had been thoughtfully placed with a personal touch – it didn’t feel like a hotel at all!

Each floor at The Imperial is dedicated to an artist whose original works adorn the walls of the rooms and the corridors. The Imperial displays a priceless collection of ‘British Art on India.’, which includes the works of great artists who worked in India in the late 17th and early 18th century and produced etchings, wood engravings, lithographs, aquatints and mezzotints based on sketches of landscapes, architecture, topography and life and times of India. The hotel also has a fabulous collection of life size oil paintings of the Princely Rulers of India. Another noteworthy point is that The Imperial has the largest collection on display of land war gallantry awards in India and neighboring countries such as Afghanistan, Burma, Bhutan and China – it’s all a little mind-boggling!

Meticulous care has been taken to ensure that each room in The Imperial brings about an aura and ambience of the Raj era. The flooring is warm-hued in either Italian 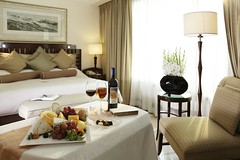 marble or parquet with artistic borders while the furniture is of Burmese teakwood with colonial flair. Every room has antique d ©cor items and wall art from the hotel’s vast collection. Our double-room, which was at the end of one wing of the hotel’s 2nd floor, was cozy and luxurious in every way. With oversized wooden furniture, a large flat screen TV and plush bedding, it blended old-world charm and new-world comfort effortlessly! But it was the luxurious bathroom with a soaking tub and sunlight streaming in through a screened window that truly won our hearts.  It was stocked with luxurious soaps and shampoos, bathrobes and slippers, and had every other conceivable amenity – it was my favorite part of the room.

Probably taking a cue from the book and movie, ‘Eat, Pray, Love’, which chronicles the travels of a single lady, The Imperial has introduced a special program called ‘Eliza’. It 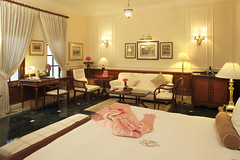 is designed specifically for the comfort of today’s solo women travelers who want their own, secure piece of paradise where they can revel in complete privacy and luxury!

The lady guests are allocated rooms on the 3rd floor in a Single Lady Corridor, equipped with CCTV cameras and are provided with special In-room check-in facility. The more interesting aspect of the Eliza rooms is its ‘feminine touch’: the upholstery is soft in shades of pink with specially designed bathing robes. Other pleasurable amenities like manicure sets, Women’s magazine and special flower arrangements make it an indulgent experience for the guests.

Sigh! I really need do need to do some traveling on my own¦

There is no dearth of 5-star accommodation in Delhi today, all vying for a piece of the burgeoning tourist traffic. But The Imperial soars above them all in a class of its own. No other hotel comes anywhere close in providing the unique Delhi experience that one gets here. Its renowned restaurants and world-class Spa are added bonuses to an already enriching stay, making it, undoubtedly, one of India’s top destinations!