We’ve spent the last 3 weeks with family, mostly chilling at home but also getting some necessary paperwork done. This has been our longest break in between traveling! We’ve started to feel guilty about taking it easy, even though we know that the break was unavoidable. It has also been getting quite warm in Bombay and we’ve realized that its time to head off to the hills, just like the British did back in the day ! Unfortunately, we need to be back in Bombay again by mid-April to finish off some more paperwork. Instead of hanging out at my mom’s place until then, we’ve decided to tour the hills of Himachal Pradesh for the 3 weeks in between. And since Gurgaon (SW of Delhi on the highway to Jaipur) falls along the way, we got here two days ago to spend the weekend with Madhu’s brother’s family. But now that we are here, we’ve been asked to stay the week and we are happily obliging !

When we visited Gurgaon last October, we made 4 day trips to Delhi and were able to explore the Rajpath area, museums, Humayun’s tomb, Lodhi gardens and Akshardham temple. Today we set off to see some more of it. Since we had some errands to run in the morning and a deadline of 4pm to be back home, it was a short day of sight-seeing. Madhu’s brother lent us his car and driver, which was a boon. So we set off at around 8:30 in the morning, got done with our work and got to the famed Lotus temple just before 10:30am.

I’d heard of the Lotus temple before, but knew nothing about what it stood for. So this visit was quite an eye-opener. The temple was built as a house of worship by the followers of the Baha’i faith. This faith is a ‘world religion’, which believes in the oneness of the 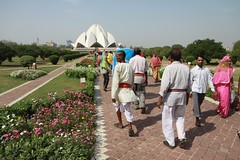 entire human race and in one God. It was founded by Bahai’ullah of Persia and spread around the world through his followers and their teachings. They uphold truth and do not believe in superstitions, rituals or idol worship. The fundamental purpose of this religion is to promote peace and harmony throughout the world. We were quite impressed and wondered why we hadn’t heard of this faith before. There are 7 houses of worship around the world, open to people of all religions. The one in Delhi is known as the Lotus Temple because of its lotus-shaped architecture, lotus being the universal symbol of purity! A gorgeous structure set amidst some wonderful greenery on 26 acres, it is said to have won numerous architectural awards.

Since it was a Monday morning we were hoping for a relaxed visit, but when we got to the temple, we were appalled to see hundreds of visitors entering the complex. We later learnt that it receives an average of 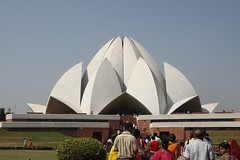 15,000 visitors every day! The entry was free and so was the parking, which was quite surprising (and which was probably why it is so crowded). We entered the main gate and walked on a paved pathway lined with flower beds on either side. The lawns surrounding the temple were large and quite well maintained. Just before the steps that lead up to the temple, we had to deposit our shoes at a basement level storage area. The steps led up to an expansive platform, below which are 9 small ponds. These encircle the lotus-shaped temple and look beautiful in the aerial shots of the complex.

The temple houses a large hall furnished with marble-topped, wooden benches. It can seat up to 2500 people at a time. We were allowed to enter the hall in a single file and then asked to pray/meditate maintaining complete silence at all times – many volunteers stood around ensuring that visitors followed the rules. If the structure is stunning from the outside, the inside is equally plain. There is no design or decor on the white walls giving the place a lovely simplicity. We sat, collected our thoughts for a few minutes and then stepped back out on to the porch. A few steps

led us down to the pool-level and the covered hallways beyond it. Their website had advertised about a movie regarding the architecture of the temple. It is shown at the temple at certain times of the day. When we enquired at the information desk, we were told that the next show would be at 11:30am and that the movie hall is in another structure close to the parking lot. We collected free passes for the movie from the desk and headed back out.

The movie theater is housed within a lovely exhibition hall, which displays the history of the Baha’i faith thru large posters. Entry to the exhibition hall is allowed only with the movie pass that we got at the temple. We browsed through the exhibition leisurely and realized that visitors must first visit this hall before the temple in order to have a better understanding of the place – it was very informative. It’s weird that currently it’s the other way around!e