Our next stop for the day was the World Heritage Site of Qutub Minar Complex! It wasn’t very far from the 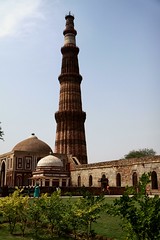 Lotus temple and we got there just before noon. Anand, the driver, dropped us off right in front of the entrance where we noticed a sign that said ‘No bags allowed’. So we left my daypack, which had a bottle of water, in the car and walked away with just our cameras. Later as the afternoon heat parched our throats, we regretted this terribly !

Funnily, the ticket counter for the Qutub Minar Complex is across the street from the main entrance, in the same compound as the parking lot. After buying tickets, we got ourselves a couple of audio-guides for Rs.100 each. We prefer these over human tour guides as they let us explore the monuments at our own pace. Along with the audio equipment, we were given a map of the complex marking all the spots where the audio-guide would provide us information. Armed with these, we walked into the lovely Qutub Minar Complex.

Situated in the Mehrauli area of Delhi, the Qutub Minar Complex houses an array of historical monuments including the famed, 12th century, Qutub Minar. It is one of India’s most popular sights and was its most visited complex in 2006, beating even the Taj; today’s weekday crowds proved this to us! Our audio-guide guided us to the Minar as the first stop within the complex. Construction on the tower began in 1199 and was commissioned by the then ruler of the region, Qutbuddin Aibak. He raised the first storey and the other 3 stories were added later by his successor and son-in-law, Shamshuddin Iltutmish. However, the tower was truly completed only a couple of centuries later by Feroz Shah Tughlaq. Each storey is surrounded by a projected balcony supported b stone brackets. These brackets have some fantastic carvings and designs. There are also quite a few inscriptions, which are said to document the repair work of Tughlaq and Sikander Lodi on the tower. The completed 72.5m high tower is considered to be the world’s largest brick minaret!

Right next to the tower is the eastern arched entrance to the Quwwat-ul-Islam mosque. As we climbed up the stone steps to the entrance, we found ourselves in a beautiful, pillared hallway much 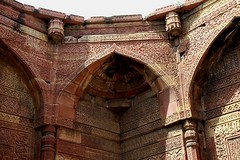 like the ones seen in our Hindu temples. The audio-guide informed us that this was because Qutbuddin, who started work on this mosque in 1192 AD, decided to use some of the existing temple architecture in order to get the work completed quickly. The pillars are gorgeous with lovely Hindu motifs and brackets. Such pillared hallways line the northern and southern ends of the mosque – they enclose a large stone courtyard within which lies the famed iron pillar. At 7m of height and 6tonnes of weight, this pillar is nothing much to look at. It is said to have been constructed by Chandragupta Maurya in the 5th century AD and placed before a Vishnu temple. Later, sometime in the 13th century, Shamshuddin Iltutmish removed it and had it moved to its present location. It is a wonder that iron has not rusted despite the sixteen centuries that have passed. This is one of the reasons why it’s so famous; the pillar is an excellent example of advanced metallurgy of those times! One other reason for its popularity is a belief that  anyone who, standing with their backs against the pillar, can encircle the entire column with their arms, can get any wish granted. For years people have been trying to do this resulting in some damage to the inscriptions on the pillar. So today it is protected with a metal fence prohibiting visitors from getting too close. On the western end of the mosque is my favorite part of it – the fantastic arched, stone screens. There is one large central one with smaller ones on either side of it. It is over 20ft tall with exquisite carvings on the entire facade – loved it!

Over the years, the size of the mosque was increased by subsequent rulers, giving it quite a haphazard and unfinished feel.

From its northern gate we exited to the unfinished Alai Minar. This tower was started by Alauddin Khilji in the 14th century but was never completed. It was interesting to see the 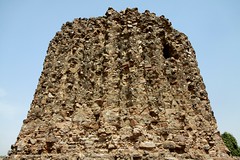 stone core of the 24m high structure, which, when completed, was intended to be almost double the girth and height of the Qutub Minar!

The next stop was the tomb of Iltutmish, which is behind the western gate of the mosque. It is a marble tomb cenotaph built within a lovely, carved, sandstone enclosure. It must have had a dome as well but it’s missing now. The enclosure has carved, prayer niches, which are absolutely gorgeous! If this place had been less crowded, I’m sure I would have spent more time here soaking in the lovely architecture. Unfortunately, today it was super crowded and we could barely stand around in peace !

The audio-guide led us to the far end of the complex to Alauddin Khilji’s tomb and madrasa. This structure is pretty much in ruins and the tomb itself is quite plain. Walking back across the mosque and past the 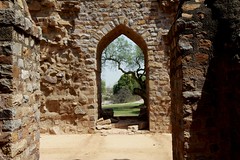 Qutub Minar, we were guided to the extended mosque’s main gateway at its southern end, called the Alai Darwaza. It was built by Alauddin Khilji in the 14th century and is made of red sandstone with inlaid marble. With gorgeous inscriptions and latticed stone screens, this gateway is said to be one of the finest specimens of Turkish architecture in India. It has a lovely dome supported by 4 arched pillars. Stone platforms have been provided within the structure for weary travelers to rest on before entering the mosque. These arches and dome are said to be made using true Islamic architectural principles making this gateway the first in the country of its type!

It took us a good 2hrs to explore the Qutub complex. It was quite tiring because of the crazy Delhi heat – and it’s not even summer yet! But we loved the place and the audio-guide had helped us explore all of it easily. Moreover, it is beautifully maintained with green lawns and litter-free pavements. In fact, except for the ignored ruins at Champaner, all the World Heritage sites we’ve been to in India so far, are being maintained quite well.

Since it was already past 2pm, we decided to head home after grabbing lunch at a Chaat restaurant in Gurgaon – LOVE north Indian chaat.