There’s so much to see in Delhi! We’ve been touring it in bits and parts for days now and still haven’t managed to see it all. Of course, since we are staying with family and trying to spend time with them as well, we haven’t been very focused on the sight-seeing aspect. Moreover, commuting from Gurgaon to Delhi takes a while. If we had stayed in Delhi, I’m sure the city could have been explored fully in about 4 days.

Today we didn’t have the luxury of a chauffeur-driven car, so we decided to try Delhi’s metro trains. We have been on metro trains in other countries but never in India. So we were quite excited about giving it a try. Unfortunately, the metro is yet to reach Gurgaon (will be happening soon, though), so we took a cab to the nearest metro station in the neighboring town of Dwarka. The station was surprisingly quite modern and clean. We bought tokens (coin-sized plastic discs) for the ride to Chandni Chowk (old Delhi) and boarded a west-bound metro to New Delhi’s Connaught Place (Rajiv Chowk). From there we changed lines and took a north-bound metro to Chandni Chowk. The entire journey took almost 2 hours but it was hassle-free and extremely comfortable. The most amazing thing is that the metros are as nice as, if not better than, the ones we’ve seen in the western countries. It’s super-clean with no litter or graffiti. Moreover, the commuters were extremely well-behaved, forming queues to enter the metro, which is quite unheard of in the north!

After alighting at Chandni Chowk metro station, we walked west along the famed Chandni Chowk Street to the Red Fort’s eastern entrance. In the previous 5 day-trips to Delhi, we had only managed to explore the monuments in its newer parts; this was our first visit to old Delhi. Chandni Chowk is at its heart and is famous for its atmospheric lanes and bazaars, which have managed to retain their old-world charm and traditions. I have been looking forward to exploring this area for a long time now. But since the bazaars were not yet open (it was just about 9am), we decided to tour the Red Fort and Jami Masjid first. As we walked towards Red Fort, we noticed many Sikh volunteers, from the nearby gurudwara, feeding and bathing the poor on the streets – it was quite a touching sight!

was completed a decade later. It was built for the royal family’s residence as Shah Jahan moved his capital from Agra to Delhi. It’s a beautiful structure of red sandstone and quite massive. Many additions were made to it by successive Mughal rulers and the British as well. We walked into the massive eastern compound, bought tickets and passed a couple of security check-posts to get to the main entrance of the fort. This massive, exquisite entrance is called the Lahore Gate as it faces Lahore in Pakistan. It opens out into a small bazaar-like lane called Chatta Chowk. The lane is lined with stalls selling handicrafts, jewelry and souvenirs – most of these were just opening up for the day as we walked past. Beyond the chowk is another gate called the Delhi Gate. This opened out into a lovely forecourt with the Diwan-i-Aam at the

The Diwan-i-Aam is where the emperor held court for the public. We’ve seen many of them in other royal residences and forts. The one here is as beautiful as any of them with its pillared hall. However, what sets it apart is the wonderful marble throne. It is beautifully carved and quite ornate. To protect it from pigeons, a protective net has been placed over it.

Paved pathways behind the Diwan-i-Aam lead to the emperor’s private residence. Visitors are no longer allowed within these structures but we could sneak a peek from the outside. They are absolutely gorgeous with lovely glass work and paintings. A channel of water, Nahr-i-bihist (stream of paradise) once flowed thru the center of this residence; today, though, it’s dry and we can only imagine how beautiful it must have looked back then. This palace complex is considered to be one of the finest examples of Mughal architecture in India.

To the right, a pavement led us to a lovely museum that housed artifacts from the Mughal period.
This structure is known as Mumtaz Mahal as it used to be the women’s quarters. Today, it showcases lovely sketches, wooden/ivory handicrafts and textiles. On the other side of the palace are the Hammams (Baths), which are unfortunately closed to visitors. Next to the hammam is the lovely, 3-domed, Moti Masjid made of marble. Again, visitors are no longer allowed inside so we could only gape at it from afar. Beyond the masjid, to the north is the Hayat Baksh Bagh (Life Bestowing Garden), which is bisected by two, dry water channels. A pavilion stands at either end of the north-south channel, and a third, built in 1842 by the last emperor, Bahadur Shah Zafar, stands at the centre of the

pool where the two channels meet.

As we exited the Red Fort we realized that the Sound and Light show held on its grounds every evening must be quite a sight, especially since it’s held on the lawns in front of the gorgeous palace. Moreover, this lovely fort complex must look beautiful under the lights! Hopefully, we’ll get a chance to catch it some other day. It was almost 11am and we hadn’t had breakfast so we grabbed some ‘brunch’ in a self-service cafeteria near Chatta Chowk.

We needed to be home by 3pm to help baby-sit the kids and since the metro + taxi route takes almost 2 hours, we knew we would have to wind up by 1pm, which meant that we had less than a couple of hours to cover Jami Masjid and the bazaars of Chandni Chowk. We knew this was impossible and that we would have to choose between the two. Since exploring Chandni Chowk would require much more time, we chose Jami Masjid for today. In true old Delhi style we took a cycle rickshaw to it. The rickshaw took us thru some narrow, crowded streets and gave us a glimpse of the bustling life in these quarters. I felt slightly disappointed that we wouldn’t get the chance to explore this place today¦

I’ve seen images of Delhi’s Jami Masjid on TV and in quite a few Bollywood films, and each time 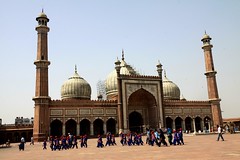 I had felt overawed by its sheer size. So I came here with a lot of expectations. Built in the 17th century by Emperor Shah Jahan (he seems to have built most of Delhi’s fantastic monuments), Masjid-i-Jahan-Numa, (world reflecting mosque) as it was then known, is the largest and most well-known mosque in India. As we climbed up its steep steps to the southern entrance (entrance No.3), I couldn’t help but remember the Jami Masjid of Fatehpur Sikri, which had a similar facade. At the top of the steps, we were asked to remove our shoes and also made to pay Rs.200 as a photography fee. We’d never had to pay anything at a mosque before, so this annoyed us a little . Before us, foreign visitors in shorts or sleeveless outfits were being given large, printed cotton robes to cover themselves with; it looked rather funny. Luckily, in spite of the heat, I was wearing a full-sleeved Kurtha and didn’t have to don the robe. Inside, the hot stone courtyard burned our bare feet and we were relieved to find a narrow strip of carpet running across the courtyard to the water tank in the center, and then from the center to the mosque. We walked on it,  placing each foot before the other carefully and managed to get to the mosque unscathed. Inside we loved the large, shadowed hallways and prayer niches. This pillared hallway has 11 arched entrances with the center one being the largest. The red sandstone walls had gold and marble inlay work but they weren’t elaborate – just simple and nice!

Visitors are allowed to climb to the top of the northern minaret for a fee of Rs.20 each. 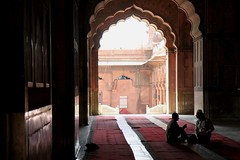 We bought tickets for this from a stand next to the mosque and then walked up a flight of stairs near the northern entrance. These led us to a terrace from where we walked across to the entrance of the minaret. The climb up was steep, circular and claustrophobic. Thankfully, not a lot of people were attempting it, so there was no rush. At the top, the views out to old Delhi, especially the Red Fort, were fantastic! The cool wind at this height was quite a welcome respite as well. We stood around for a while, took some pictures and then left. Back in the courtyard of the mosque, we found a shaded area and sat for a few minutes. We watched a bunch of school kids being herded across the mosque; possibly a history class on a field trip. The foreign visitors in colorful robes made quite a funny sight as they traipsed around on tip-toes on the burning stone. As I sat and watched all this I realized that the mosque felt a little commercialized because of the number of tourists around and the ticket stalls for photography and minaret. Most other city mosques we’ve been to have a far more serene atmosphere with lesser crowds and a calm, devout feel in the air.

At around 1pm, we took a cycle rickshaw to the nearest metro station at Chawri Bazaar, a metro from there to Rajiv Chowk, another metro from Rajiv Chowk to Dwarka Sector 9 and finally a cab to Gurgaon. We had thoroughly enjoyed the tour of Red Fort and Jami Masjid but the hot afternoon had completely drained our energy. Summer has set in early this year and we’ve realized that we cannot be traveling in the plains anymore for the next few months.