The plan for today was to see the handicrafts in the villages and then head out to the Little Rann Sanctuary in the evening – we had bookings with Desert Coursers, an outfit that provides accommodation and safaris in the sanctuary. So we checked out of our hotel in the morning, left our luggage with the concierge and took an auto to Aina Mahal; we were there exactly at 9am. The auto that would take us to the villages arrived promptly as well. Mr. Jethi, who was outside the museum (it’s closed on Saturdays), working on something in the yard, talked to the auto-driver, Bharat, in Kutchchi and described the route we were to take. He then explained to us that we would be taken to 3 villages – Bhujodi for hand-weaving, Ajrakhpuram for block-printing and Dhaneti for embroidery. At 9:15am, we set off for the villages.

Bharat spoke Hindi well and some broken English. He turned out to be quite resourceful. He first drove us to the village of Dhaneti as it was the furthest out – some 40km southwest of Bhuj, on the road to Ahmedabad. The landscape en route was like that in Nevada – dry grass with shrubs and cacti.

We got to Dhaneti around 10:30am. It turned out to be nothing more than a few clusters of homes right off the main highway. The Ahir community lives in this village and they are famed for their 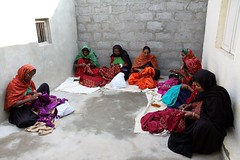 embroidery skills. Bharat took us to a particular home and parked outside. We removed our shoes at the door and entered a small courtyard where women sat on the floor in a semi-circle doing embroidery work on saris. At first Madhu and I were a little awkward not knowing how to approach them. But they seemed friendly and not upset by our intrusion so I walked up to one of the ladies and squatted down to have a closer look at the work. It was absolutely brilliant – the quality of the threadwork was the best ever! We chatted with the ladies a bit, using Bharat as our translator. Apparently, they get ‘orders’ from private firms like Shrujan that sell their work. The firms provide all the material, threads, needles and designs for the work. The ladies are paid Rs.65 per day for their hard work. Bharat explained that if the artisans are educated and entrepreneurial, they tend to market and directly sell their own stuff. The uneducated, poor women of the tribes, like those in the Ahir 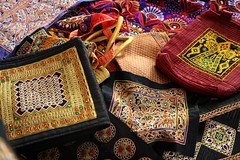 community, prefer working for firms like Shrujan that provide them with a livelihood.

Bharat then took us to another lady’s home where she showed us many finished products in the forms of embroidered bags, saris, wall-hangings, etc. Apart from working for Shrujan, she was enterprising enough to sell some stuff on her own as well. The products were all lovely and if I still had my northern California home, I would have definitely bought a couple of the wall-hangings…

Our next stop was the village of Ajrakhpuram. Here we were taken to Dr. Ismail Mohammed Khatri’s block-printing office, where we met him in person. He has an honorary doctorate 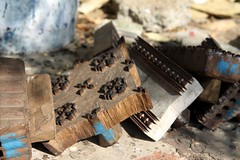 from an arts university in UK and is famed for his work. He was nice enough to take some time out and explain the process of block-printing and dyeing (using natural products – no chemicals!) to us. It was so fascinating! At the back of the office is an open compound where all the dyes are made by boiling and extracting the color from products like indigo (blue), turmeric (yellow), pomegranate (red), iron (black), etc. At the other end of the compound is a small shack where the block-printing is done before the dyeing. It was really nice to see this from up-close! The main office had some finished garments and furnishings, 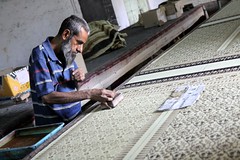 which we browsed through before heading back out.

Bharat had mentioned that Shrujan has a nice showroom in the area so we requested him to take us there as well. The showroom is off the main road on a dirt road. Surprisingly, it was a really nice  store with great interiors. They had garments, furnishings, accessories and home decor stuff – all hand-made by local artisans. The silk cushion-covers with Ahir embroidery on them were extraordinary! Whenever Madhu and I have another house of our own, I will definitely remember to buy some home furnishings from here – apparently, Shrujan has stores at Breach Candy and Juhu in Mumbai! We bought a couple of small gift items for the family and left.

Our last stop of the tour was the village of Bhujodi, which is famed for its hand-weaving techniques. We were taken to two homes where the family members weave woollen, silk and cotton shawls, 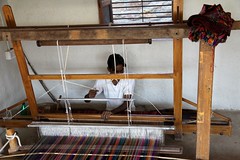 bed-covers, scarves, stoles and much more. They were very warm people and were more than happy to chat with us about their village and work. One of the homes was very traditionally built, enclosed within a nice compound with a cow-shed in the front. It looked a lot like the traditional homes showed in Hindi movies . The head of the family has been awarded national awards for his skills and there were many certificates adorning the walls of the house. The family sells some of their hand-woven products at the house. The quality of each and every piece was 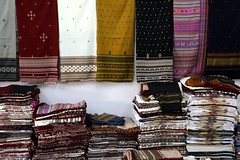 exquisite and they were reasonably priced too. I bought a woollen stole which was hand-woven and tied and dyed in a bandhini style – loved it .

We were dropped back at Prince Hotel by 1:30pm. The bus to Ahmedabad was scheduled to leave at 3pm so we had plenty of time to eat a nice lunch and freshen up a bit before collecting our luggage and going to the travel agency’s office. We got there around 2:30pm and to our utter dismay found that all buses on the Bhuj – Ahmedabad route had been cancelled for the afternoon because of some political rally on the highways . We immediately called Hotel Prince to see if we could have our room back for the day. Unfortunately, it was already let out to the wedding guys – no other rooms were available . We were planning on calling the other hotels mentioned in LP but the guy at the travel agency said that all the good hotels in the area will definitely be booked because of the wedding season and some conference of IAS officers in the area. So according to him our best bet was a smaller but new hotel hidden in one of the by-lanes of the town, called Shiv Hotel. It was about 2 minutes walking distance so we walked over to check it out. Luckily, it turned out to be a really nice hotel and quite empty – we were able to get a double-room easily.

In the evening, since we had the time, we headed out to see Bhuj’s Folk Arts museum. We thought it would be a state-run thing just like the one in Delhi, which was quite spectacular. But this one turned out to be a private one and nothing great. LP had mentioned that it was open until 6pm. But when we got there at 5pm, the lady who manages the place, Ms. Joshi, informed us that it actually closes at 5pm. She was nice, though, and kindly offered to hang around for 15 more minutes if we wanted to see the place in that time. Madhu and I immediately agreed. The museum consists of 2 galleries (if you can call it that!). One housed information on the founder and his family history – a little too boring. The other gallery had artifacts collected by the family showcasing colorful Kutchchi handicrafts and textiles. These were interesting but nothing different from what we had seen at the Kutchch museum or in the homes of the village artisans. Across the galleries, there was an open compound where replicas of traditional Kutchchi mud-homes were built. We were allowed to enter 2 of the mud-homes and these were quite interesting. The insides of the homes were decorated with lovely mud-work. There were also many traditionally-used furnishings and utensils on display here. We took a few pictures and left – we had only taken about 10 minutes of Ms. Joshi’s time.

We spent the rest of the evening at a frustratingly-slow cyber cafe. Overall, this day in Bhuj started out fantastically but ended rather boringly. I’m glad we managed to find a good place to stay; otherwise it could have ended disastrously. Anyway, tomorrow we will head out to the Little Rann Sanctuary – totally looking forward to that!