Champaner is the main reason why we came to Vadodara, so we woke up this morning with great anticipation. We were at the Central Bus Station by 7am and managed to get a 7:15 bus out to Pavagadh, which is about 50km from Vadodara. Now, when I say bus, this one is no luxury bus … it’s a true-blue State Transport bus . The bus looked battered from the outside and the seats inside, a little worn, but it wasn’t dirty and seemed to function quite well. So, for Rs.22 each, we found seats and got to Pavagadh by 8:45am. I thought the day had started out quite well … hmmmm.

When I was doing research on our trip, back in the day, I had found some good info on Champaner and knew that we should definitely visit it. But the Lonely Planet book we are carrying hardly has any information 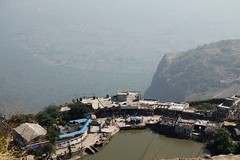 on it. All we could gather from my previous notes and LP was that Champaner has ruins that are scattered all over the place and that Pavagadh has a hill fort and one can either walk up the hill, which takes about a couple of hours, or ride a cable-car. We also assumed that the ruins of Champaner were on top of the hill. So as soon we got down at the Pavagadh bus station, we asked around for a bus to take us to the hill and found one immediately. It took us about 5km up the hill and dropped us off at a point beyond which vehicles cannot ply. We noticed that there was a huge crowd of people going up the hill. They were mainly local Gujaratis – there wasn’t a single non-local in sight, except for us. We were surprised that the ruins are so popular among the locals but didn’t think too much about it. I wish we had …

Since we didn’t want to tire ourselves out right at the beginning of the day, we bought tickets (Rs.87 each return trip) for the cable-car ride and walked up to its starting point. On the right, a series of 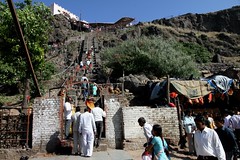 steps led up to the top of the hill. Many adventurous souls were walking up. There were many stores lined on either sides of the steps selling lots of stuff but mainly flowers, coconuts and other items that one would offer in temples. That’s when I suddenly remembered that there was a temple at the top of the hill as well. But again, we didn’t bother opening the LP to double-check on things. The cable-car station advertised that they were ISO-9001 certified. Madhu had read on the internet that in 2003 a cable-car had fallen, injuring quite a few people. After this incident, they had revamped the whole machinery and were now certified. I’m a little afraid of heights so this information didn’t particularly comfort me as we rode up the hill in the cable-car. It was a steep climb up the hill and we were happy that we weren’t climbing it on foot. Thankfully, the cable-car deposited us safely at the top. But as soon as we alighted we saw signs pointing us towards 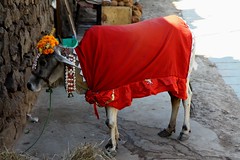 the temple … and nothing else! And that’s when we knew something was wrong. We asked around and found out that people hadn’t even heard about Champaner; all the people climbing the hill were actually on a pilgrimage to visit the Kalika Mata’s temple, which was quite popular amongst the locals. We were stumped. Apparently, the ruins are back at the base of the hill . But we decided to keep going as visiting the temple was also on LP’s list of things to do. We had to climb some really steep stone steps to get to it from where the views around Pavagadh were quite nice. We got a good, though quick, darshan, after which we took the cable-car back down.

Since nobody seemed to know where the Champaner ruins were, Madhu and I were a little frustrated and upset 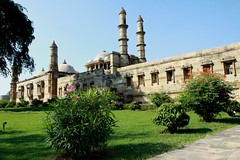 by the time we got back to the starting point of the cable-car. How can a World UNESCO Heritage site be so elusive and unmarked!! We finally walked to Hotel Champaner, which was right there hoping that at least a hotel run by Gujarat Tourism board would have some information. And thankfully, they did. In fact, a gentleman who was standing in the lobby gave us all the details we were looking for. Apparently, there are ruins at the top of the hill as well as some about half-way to the top. Other ruins are on the way down from the cable-car’s starting point to the base of the hill. And the most famous ruins of 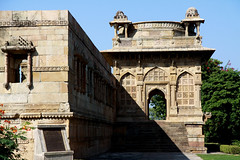 Champaner are the Mosques, which are actually right in front of the Pavagadh bus station where we had alighted in the morning .

Since it was already around 11:30am, Madhu and I knew that we would never be able to cover all these ruins before sunset. So we decided to skip those on the top of the hill and start working our way down to the base of the hill. It was a 5km trek down and we took almost 2 hours to do it. On the way, we were hoping to see some spectacular ruins … should have known better! We found 3 marked sites and one unmarked one. A marked site called Saath Kamaan was the first one we found. We have no clue what it is or what it had been as there was no literature or information placed at the site – all it said was ‘World Heritage Site – Saath Kamaan’. Some stray dogs had made the place their home and views from there to the base were fantastic. We took a few pictures, rued the sad state of things and moved on. The next sign was about a 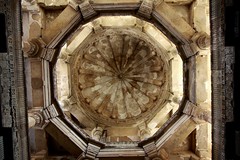 kilometer down the hill saying that some Mahal was 0.03km ahead. We never found it . It may have been in the forested area that border either sides of the road, but there was no way we could go looking for it without a proper pathway or marking. So we kept trudging on. We got curious stares from people passing by in buses, jeeps and two-wheelers; they must have wondered why we were on foot in the blazing afternoon heat . Anyway, further down, we chanced upon an unmarked structure. It was behind an enclosure but the gate was open, so we ventured in. It looked like an old, dilapidated mosque with fantastic, carved pillars. We were a little scared to walk into the structure as it didn’t look cared-for and was in the middle of a forested land – Lord knows what could be inside. So we just took a couple of pictures from outside, got further depressed with how the ruins were being left to decay and kept walking on. The 3rd and final marked site on the way down the hill was part of a wall with a grand archway in the center. It looked beautiful! But again, there was no information on what it really was.

We finally reached the bus station at the bottom of the hill around 1:30pm. We were famished but couldn’t find any restaurant out there except for road-side stalls. So we feasted on bananas and took a small break at the bus station. We fed the banana skins to a cow that was desperately foraging for food . After the break, we headed out towards the Mosques that were the main ruins of Champaner. Having seen the state of the ruins on the hill, we had very little expectations from the mosques. We were quite tired from the hike down in the heat and were feeling a little low and cheated. But nothing like some breathtakingly beautiful mosques to lift the spirits … and that’s, thankfully, what we found.

The ruins across from the bus station are enclosed within huge sandstone walls built in the 15th century along with all the structures within this fortified area. We walked thru a grand gateway and immediately came upon the first mosque, Shaher ki Masjid, to the left. It was simple but gorgeous. We paid Rs.5 each as entrance fee and learnt that this would be good for entry to the other mosques as well. It was fronted 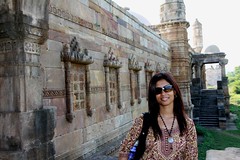 by a nice courtyard where a few people were picnicking under the shade of huge trees. The mosque itself was a one-storied structure with many arched entrances in the front and sides. The inside had many pillars with domed ceilings and mehrabs (carved niches) for prayers. There was no one there except us so it felt peaceful to just stand and gape at all the beautiful carvings. Back out we realized that the fortified area of Champaner also has people living in it. There was a temple, some stores and houses right in front of the mosque. We asked the caretaker, a lady for directions to Jami Masjid, our next stop, and she told us to walk thru the village until we hit another stone gateway, which would take us to the mosque. We did exactly that and found the masjid quite easily. This one was absolutely spectacular and really well-maintained. It had a wonderfully carved entrance and a huge courtyard within. Similar to the Shaher ki Masjid, the Jami Masjid also had many pillars within, with one huge, central dome as the ceiling. In one corner, we found men working on and cleaning the area – I guess restoration work is still on-going. Again, apart from a couple of other people, we were the only tourists there so we enjoyed it thoroughly. We sat at the back of the mosque and wondered why the govt was not doing more to advertise Gujarat’s gems … these places must definitely be on every traveler’s list.

The last mosque we visited was Kewda mosque which was in the middle of farmlands. We walked thru a narrow, unpaved, dirt road to get to it and loved the atmosphere. The mosque had no visible caretaker, so we let ourselves in. From here we got spectacular views of Jama Masjid in the distance. The place was vacant so we checked it out leisurely and sat a while. Again, the courtyard in front of the mosque was pretty well-maintained. If we had brought some food along, this would have been an ideal, quiet place for a picnic . 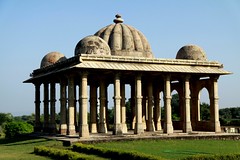 There was one more mosque, Nagina Masjid, but it was further into the countryside and we didn’t think we would be able to get to it and back before sunset as it was almost 4pm. So we decided to let go and head back home.

Luckily we caught a Vadodara-bound ST bus almost as soon as we got to the bus station. It dropped us off at the Central Bus Station by 5:30pm. When we got back to our rooms, we realized how exhausted we were … not just from the physical exertion of walking around but also the mental ups and downs of Champaner’s lost glory. For those planning on visiting Champaner, which we highly recommend, here’s what you should do: pack yourself a picnic and spend the day amongst the beauty of the mosques and other ruins at the base of the Pavagadh hills. Don’t bother going up the Pavagadh hill unless you are religiously inclined or have a fascination for cable-cars.