Junagadh, a visit to one of India’s oldest forts

Junagadh literally means ‘Old Fort’. It is named after the imposing fort, which is right in the center of town and was built in 319 B.C. (yes, B.C.!) by Chandragupta Maurya.

Getting to Junagadh from Sasan was relatively easy and without incident because Maneland Resort’s friendly manager, Bharat Bhai, arranged a car to drop us off for Rs.600. It was a 1 and 1/2 drive west through some of the nicest countrysides in Saurashtra. We passed fields of sugarcane and wheat that stretched for miles on either side of the road. The condition of the roads was good too, so it was quite a comfortable ride.

At Junagadh, we checked in to Hotel Lotus, and then headed out to lunch. At lunch we met two sisters from Mumbai who were on their way to Somnath from Junagadh. We chatted a bit and found that the younger one amongst them is currently Maharastra’s youngest female MLA – I didn’t catch her name, though, which was rather unfortunate .

After lunch, we walked about 5 minutes to get to Mohabbat ka Maqbara, which is one of Gujarat’s finest Indo-Islamic monuments. 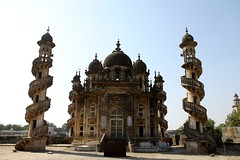 Built in the 18th century, it is the tomb of one of Junagadh’s nawabs and is indeed a very fine structure. Unfortunately, it’s right in the center of a very crowded and congested area of Junagadh and opposite to a high court. On entering the compound that encompassed the monument, we were appalled to see how badly maintained the area was. School children, on a break, were running around uninhibited, while there was litter everywhere. Next to the nawab’s mausoleum is the tomb of his vazir, which is even more beautiful. It has 4 minarets with spiraling stairs that rise to the top of each minaret. It was absolutely gorgeous. But the afternoon sun was bearing down on us and the school children kept bugging Madhu to take pictures of them – this was rather hilarious to watch – the kids posed for him and wouldn’t stop . We decided to come back at a later time. Since Madhu wasn’t feeling too well, we went to back to our hotel room and stayed indoors for the rest of the day.

Today morning we woke up early to visit the Old Fort, which is called Uperkot. We got there by 8:30am and the weather was very pleasant. Outside the fort, we engaged a young guide to show us around for Rs.100. And he did a great job! Since the fort is more than 2000 years old, many of his stories regarding the fort intermingled with Hindu mythological stories. The 2nd floor of the main palace within the fort was broken by Mughal invaders and 4 minarets were added to the top of the 1st floor to make it look like a mosque (Jama Masjid) – and it does look like one from the outside. Inside, though, with all the pillars and carvings, it looks like a regal palace court; loved the feel of it.

From the palace, we visited 2nd century A.D. Buddhist caves that were built during the time of Emperor Ashoka. These caves are the best feature of Uperkot! The ASI (Archaeological Survey of India) charge Rs.5 as entry fee to the caves, which are underground and reached via a maze of short steps that go down 3 stories. At the bottom is the main hall where monks sat in ledges carved into the walls to meditate. This room is absolutely stunning! It has pillars with carvings and has a wonderful, weathered feel about it. Our guide said that he has often spotted snakes that like lounging around in the coolness of the caves, away from the blazing heat outside. Scary!

There are 2 step-wells within the fort complex. One is called Adi-kedi, named after 2 young sisters who were sacrificed here in order to appease the Gods and ensure water in the well (!!!!). The steps in to the well are carved out of a huge wall of rock and look great. We walked down halfway and then turned back mainly because the water at the bottom of the well looked absolutely filthy . I didn’t want to get close enough to smell it, so we turned around and walked back to the top, which wasn’t an easy climb. The other step-well was so deep that we couldn’t see the bottom easily. Steps leading down to the water were built circuitously around the well, with ledges at various levels – the well is rumored to have taken 24 years to build!

It was just about 10am when we walked back out of the fort; it had been a lovely morning so far. From here we took an auto to Junagadh’s museum but unfortunately it was closed; it’s closed on all Wednesdays . So the next item on the agenda was to see the Ashoka Edicts. 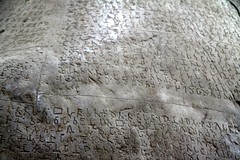 This was about 10 minutes away from the fort. When we got there, we found it to be a huge boulder that is enclosed tightly within a white building – there is no aesthetic to it at all. The boulder would have looked great if it had been placed in the center of a green lawn instead; it would have looked far more appealing – oh well, it is what it is! We were quite disappointed with the place. Getting a good shot of the boulder was also difficult because of the way it was placed.

In the evening we headed back to the nawab’s mausoleum to take pictures when the light was better. This time the place was deserted and we could walk around in peace. It was saddening to see such fine architecture being ignored by the state govt .

One of Junagadh’s foremost attractions is Girnar Hill and the 12th century temples atop it. The town of Junagadh is at the base of this hill. Most tourists/pilgrims hike up Girnar’s 10,000 steps to see the temples. Based on our experience from the 3,200 steps at Palitana’s Shatrunjaya hill, we knew 10,000 steps are far beyond our physical abilities . Moreover, since Madhu wasn’t feeling too well, we knew it wouldn’t be a smart thing to attempt. We weren’t too keen on taking dolis to the top either, so we skipped Girnar completely. If we had been in the mood of temples, we would have definitely stayed one more day in Junagadh to scale hill … well, not this time.

We have mixed feelings about our Junagadh stay. Apart from Uperkot, there’s nothing really worth seeing here – it’s like any other small town in India, with no special charm or feel. And since we skipped the temples, I feel like we didn’t see the town properly – after all, these temples are listed as some of Gujarat’s finest. On the other hand, the fabulous Buddhist caves at Uperkot totally made my day…. but were they worth the 2-day stay at Junagadh? Not sure…