It’s probably because of the way it’s shaped, but getting around in Gujarat is no easy task. Since Bhuj is a huge tourist attraction in the Kutchch area, we were quite confident that buses/trains to there would be easy to find … err, not so much! We would have to take 3 trains to get to Bhuj from Junagad. As for buses, there were no direct ones, so yesterday morning, we took an a/c bus to Rajkot (2 hours ride), one of the biggest cities in Saurashtra. There we found that only ONE travel agency ran buses to Bhuj! Thankfully, we found seats in their air-conditioned bus that leaves Rajkot at noon and gets to Bhuj in 5 hours.

Unfortunately, the day that we decided to land in Bhuj also turned out to be the week of a big, fat, Indian wedding in the area. So the bride’s daddy-dearest had completely booked out all the rooms in the city’s best hotels. Madhu had singled out Hotel Prince, a 3-star hotel, as our choice of stay but so had the wedding party; there were no rooms available! We tried their sister hotel, Prince Residency, and they were booked out too. Just when we were wondering where to go next, Hotel Prince miraculously came up with a Deluxe, double-room available for 2 nights; we were hoping for the cheaper Standard room but were grateful for anything available, so we grabbed the Deluxe room immediately.

Today we woke up late and lazed in our wonderful room until noon. After lunch, we headed out to see Bhuj’s main attraction – the Aina Mahal (‘Hall of Mirrors’). The 2001 earthquake had damaged 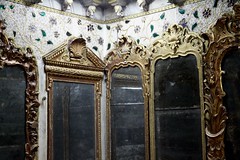 most of Bhuj’s wonderful architecture, leaving the structures absolutely devastated. Thankfully, the curator at Aina Mahal and his staff have managed to repair most of the damage and reconstruct the Mahal partially; some of the rooms are still closed and under maintenance. The reception hall of the mahal is a small museum showing artifacts from the life of the then rulers. Here we met the curator, Mr. Jethi who has been mentioned generously in LP. We were happy to meet him and learn more about the palace.

Built in the 18th century under the rule of Maharaja Lakhpathji, the Aina Mahal has probably the most dhinchak (for non-Mumbayites this means ‘glitzy; almost gaudy’) interiors I’ve ever 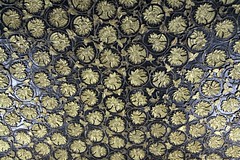 seen. From ceiling to floors, it is adorned with mud-work, tile-work, mirrors, paintings, hurricane glass-lanterns and decorated diya-holders. It was all very colorful and very interesting. The first room we entered was the highlight of the Mahal. It has a floating platform in the center, which is surrounded by water and fountains on all four sides. There are 3 wooden walkways to the central platform, which has a prettily-carved, ivory throne with a beautiful, embroidered, fan hanging atop it. This is where the Maharaja sat and was entertained by musicians and dancers. The water and fountains kept the air cool even during the blazing summers of Kutchch – aah, the life of a king!

The Kutchch area is well-known for its tribal handicrafts and this is being promoted quite seriously by the govt to help the local economy. Many trusts have been setup that work closely with the local artisans and help market their wares. LP had mentioned that Mr. Jethi would help with trips to the villages around Bhuj that produce such handicrafts. When we spoke to him about this, he said he could arrange an auto to take us to 3 different villages outside Bhuj to see embroidery, hand-weaving and block printing using natural dyes. We happily signed up for it – the tour would be 9am the next morning.

Next to Aina Mahal is the newer Prag Mahal, which was apparently used as a set for the film Lagaan. But it has not been maintained at all! Mr. Jethi warned us that there’s nothing inside it to see, but since we had nothing better to do, we paid Rs.12 each to tour the palace. How I wish we had listened to Mr. Jethi! The palace is completely in ruins. Pigeons have made it their home – there’s bird poop and litter everywhere. The earthquake had damaged quite a few things and nobody had bothered to clean it up or repair it. It would have been a great set for a Ramsay horror flick – wonder what the Lagaan guys used it for – got to see that movie again!

Later we walked thru Shroff bazaar, which has many stores selling the wonderful embroidery and bandhani work that Gujarat is famous for. The bazaar was relatively clean so it was easy to walk about and do some window-shopping. The most tempting of them were the sari shops – they had the most delectable saris draped in the windows – LOVED staring at them!

Our next and last stop for the day was the Kutchch museum run by the state govt. This is housed in a lovely, British-era building with a green courtyard in the front. Surprisingly, the entry fee 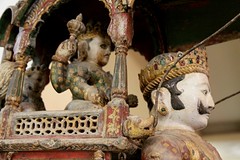 was just Rs.2 per head but this was mainly because it is a very small museum. The ground floor had life-sized exhibits of the various tribal communities in the Kutchch area, describing their lifestyle, work and garments. It was well laid out and quite informative. The floor above displayed all the textiles that are produced in this region. Madhu took about 10 pictures and had to pay Rs.2 for each of them – a strange system!

Later we strolled through the main market area, bought a couple of books to read and headed back to our hotel for a restful evening.