Our OCI application was finally filed yesterday. It didn’t require a lot of work – just 2 copies each of the OCI application form, US passport and the old, cancelled Indian passport, plus a Demand Draft of Rs.14,230 each. The only annoying part was that the application had to be mailed to the Foreigners’ Regional Registration Office (FRRO) using Indian Postal Service only – no private courier was allowed. The India Post office near Thane railway station was in a dilapidated building that must have been at least a hundred years old. There was a notice near the entrance warning customers to be careful – apparently, the cement ceiling above the shutter doors was crumbling and pieces of it have been falling on people! Well, anyway, we stood in line for the Speed Post service and, after nearly an hour, were able to mail the documents. Two good things about Speed Post service – it’s super-cheap (just Rs.34 for a packet of documents weighing about a kilo) and has a tracking number to track the delivery.

Today morning we bid mom and dad goodbye and left for the start of our Gujarat/Rajasthan tour. Our first stop is Baroda, or more appropriately,Vadodara. Vadodara, itself, doesn’t have much to offer in terms of sight-seeing. But there’s Champaner, which is about 50km from Vadodara and is a World Heritage Site – so definitely a must-see.

Madhu had booked AC Coach Car tickets on the Gujarat Shatabdi express, going north from Mumbai Central to Ahmedabad. We boarded the train at Borivali. It was scheduled to arrive there at 7am but was about 10 minutes late. We didn’t complain ‘coz when we eventually boarded the train, we were quite impressed with it. The AC Coach Car compartment was as good as any European train compartment – it was clean, well-lit and spacious with very comfortable seats. We were served with a bottle of water, tea/coffee/juice and breakfast as well. At about Rs.700 each for a 4-hour journey, this train ride is totally worth it.

We alighted at Vadodara junction around 11:15am. Lonely Planet had suggested a few mid-range hotels in an area called Sayyajigunj, which is less than half a kilometer from the station. So we walked, lugging our backpacks along. The first hotel we had decided on checking out was Hotel Valiant. It occupies the 7th and 8th floors in a building called BBC Towers. Once we got there, we didn’t have to check any of the others (although there were many hotels in the area) as this one turned out to be good enough. We checked in, dumped our bags and headed back out.

It was past noon and we were famished. LP had suggested a few good restaurants in the area. We were both keen on sampling a Gujarati thali so we ended up at Myra, a restaurant within Hotel Surya, which is literally next door to our hotel. After filling up (a little more than we should have) on Gujarati delicacies, we took an auto-rickshaw to Vadodara’s main (and possibly, the only) attraction – Laxmi Vilas Palace. It turned out to be quite close to Sayyajigunj – cost us just about Rs.20 to get there. 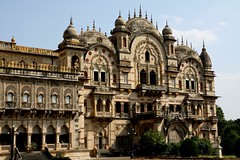 Till date, we’ve never paid more than Rs.20 per head for entrance to any of India’s attractions, including the Taj. So we were a little taken aback when we were charged Rs.125 per ticket for the Laxmi Vilas Palace. However, we learnt that an audio guide was included in the tour and then the price made sense.

From the entrance, we walked about 200 meters to the palace building. We noticed a golf course on the right and wondered if members of the royal family still lived there. We later learnt that it was built in the 1930s by the then Maharaja, for use by his European guests … nice! We noticed pea-hens in the lawns – peacocks must have been around as well; just didn’t spot them. We also noticed that we were about the only tourists there. The caretaker mentioned that they average at about a 100 visitors a day and maybe 200 on weekends, which is not much. I guess, the high entrance cost makes it prohibitive for local crowd and Vadodara isn’t exactly on every foreign tourist’s itinerary.

At the palace, we were each given a sleek, Phillips audio unit (quite like Apple’s iPod) with a pair of ear-phones. We were told that there were 11 marked points in the palace and the audio guide gave information about each point. Madhu got a Hindi version while I got an English one – both were superb! Usually with a local guide, we have to keep pace with them, which doesn’t let us look at the place leisurely. With the audio guide we could listen to it or pause it any time we wanted; so we took our own sweet time.

The palace is simply phenomenal! It was built in 1890 by Maharaja Sayyaji Gaekwad III, the then ruler of Vadodara and named after his wife. Made of bricks and red sandstone from Agra, it is rumored to have cost 180,000 pounds to be built at that time!! It has influences from the Rajputi era and includes European Gothic and Baroque styles. We were not allowed to take pictures within the palace but outside was allowed. At the back of the palace, is a huge, ornamental pool, which doesn’t have any water now. Back in day, one could see a reflection of the beautiful palace in its waters. Today the area is used to hold lavish weddings or corporate dos. I can just imagine how beautiful the setting would be with the fantastic palace as a backdrop! Today, descendants of Sayyaji Gaekwad still live in a wing of the palace…

Each and everything within the palace was fantastic, including the armoury, and the audio guide walked us thru it all wonderfully. The highlight of the palace, though, was point# 10 – the Darbar Hall. I’ve never seen a hall of this magnitude and brilliance before. It was built and used for promoting musical performances. Even today it is a venue for Vadodara’s annual music festival and other cultural events. It has intricate mosaic flooring studded with Italian marble and precious stones. There are balconies on all four sides, covered with intricate lattice-work, behind which the royal family’s women sat and watched the performances. 4 huge windows are covered with stained-glass work with Hindu mythology themes – the first of their kind. Madhu and I were completely enthralled – we sat on the mosaic floor, partly in awe and partly out of exhaustion, as the audio guide pointed out all the features and highlights of the hall. Later, as we walked past the last point, which is a huge mosaic mural on the front wall of the palace, we realized that we had been on our feet for more than 2 hours – we were absolutely tired! 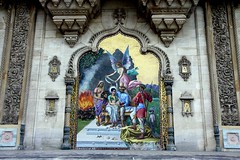 The original plan had been to visit the Vadodara Museum as well but we had no energy left. Laxmi Vilas Palace had exhausted us – not that we are complaining. I wonder why it’s not promoted more vigorously; it’s an absolute must-visit place for fans of India’s heritage palaces.

We took an auto back to our hotel. This time we only paid Rs.15 because we shared our seat with a few packets of Pav that the auto-driver was ferrying to some store or restaurant – this happens only in India! Love it!!

The entrance to the restaurant is to the right of the hotel’s main entrance. As we walked in, we found the place to be nicely decorated with traditionally dressed servers. It’s a 3-star hotel so we weren’t expecting the thali to be cheap … but it cost only Rs.110 each . And the food was fantastic! There were 4 sabzis and a choice of Gujarati or Punjabi daal. We, of course, had the sweet Gujarati daal. We were also served aloo kachoris and dhoklas, which were the yummiest ever. To drink, there was some refreshing buttermilk. For desert, we were given Mango Halwa and Malpoha. All this is unlimited . It was a complete feast – I’m sure we’ll be dining there again.

Kansaar was recommended in LP. We had gone there for lunch today but it was closed so we headed back there for dinner. It is a very Udipi-style restaurant in terms of decor and ambience. We were not very hungry (lunch had been huge) so it was not a very smart idea to go to a Thali restaurant again. But, tired as we were, we didn’t want to go too far; Kansaar is just a couple of blocks from Hotel Valiant. We sat before huge thali plates and the servers started serving – a white Dhokla (not sure what it was exactly), bread pakodas, 4 different types of sabzi, papad, kadi or daal, rotis, rice and desert. As expected the food was good but it wasn’t as good as that at Myra. The jalebis, that came as part of desert, were fantastic – I ate up a couple of those. Service was good.