For some reason, Madhu and I were a little exhausted with yesterday’s walking around. So we couldn’t imagine doing too much today. We had intended to head out to Champaner in the morning but decided not to as we just didn’t have the energy for it. Instead we woke up late and lazed a bit. We soon realized that we weren’t tired enough to spend all day within the hotel room, so we headed out to see the rest of Baroda’s sites, which weren’t really on our list of must-see places…

Since the Baroda Museum doesn’t open until 10:30am, we first went to Tambekar Wada, which was described in LP as a typical Maratha mansion. 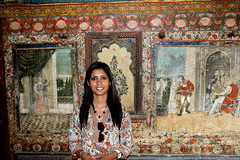 The Diwan of Baroda, Bhau Tambekar, lived here in the late 19th century. When we got there, it didn’t look anything like a mansion from the outside. It looked old and stately, yes, but it was in the middle of a busy street and I doubt anybody passing by would have given it a second look. There were two men at the main door who looked up at us curiously when we walked up to them. We later learnt that they are caretakers of the Wada and were posted there by the Archaeological Society of India. When Madhu asked them if this was indeed Tambekar Wada, they both nodded and then one of them volunteered to show us around.

There’s no admission fee. We were taken to the first floor of the building, stairs leading to which were steep and high. We entered a long, rectangular room, which had a long, narrow balcony on the left. The balcony was covered completely with steel mesh, which let ample light in but didn’t exactly match its vintage surroundings. The hall, itself, though, was exquisite. The walls were completely covered with miniature paintings that depicted scenes from the Ramayana and the Mahabharata. But most of the paintings were in a state of decay. The caretaker mentioned that it was only recently that the Wada had been taken up by the Archaeological society of India as a Heritage site. Until then, it was being used as a Marathi school for the local Maharashtrian children … sad . He then took us to another hall, which was on the floor above. Here the murals were better preserved and most paintings were complete. The paintings were of European as well as Indian themes. Apart from these two halls, no other rooms were open in the huge Wada for public viewing.

Before we left, we were asked to sign a visitor book. Madhu noticed that we were the only visitors for the day and that there were a few foreign visitors, probably one a day, over the month. I guess they all had LPs which brought them here .

Our next stop was the Baroda Museum, which is within a park called Sayyaji Bagh. We got there at exactly 10:30am. The park itself wasn’t anything special so we headed directly to the museum, which was housed in an imposing brick structure. The entry ticket was just Rs.10 and we were told that we were the 1st visitors of the day . Unfortunately, no cameras were allowed within the museum. This was really sad ‘coz the museum had some unbelievably pretty stuff. There were intricately carved sandalwood figurines as well as brass sculptures, which are our favorite. The museum, surprisingly, had artifacts from around the world – apart from Nepal, Tibet and China, it had paintings and marble sculptures from Europe as well. There was also a children’s section and a Natural History section, both of which were interesting. The highlight of the children’s section was a 71-feet skeleton of a blue whale – quite a sight!

By the time we finished seeing the museum completely, we were really tired again. So we decided to get some lunch and spend the afternoon indoors in our room. At 4pm, we headed back out again. 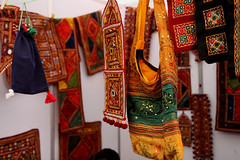 Since there is nothing else to see as such in Baroda we decided to check out the trade fair that we had noticed yesterday on our way to the Laxmi Vilas Palace. It turned out to be an exhibition and sale of Indian crafts and textiles called Gandhi Shilp Bazaar. Apparently, during the tourist season, which is pretty much November thru January, the govt organizes these bazaars to promote local artisans. This bazaar had stalls from UP, MP, Karnataka, Andhra Pradesh, Gujarat, West Bengal and Orissa. It was extremely colorful and Madhu had a great time clicking away. Seeing his professional-looking camera, many stall owners asked us if we were from the press .

I had a great time browsing through all the stuff. The textile stalls from Gujarat were the best as they had great bedspreads and cushion covers. We chatted with a lady at one of the Gujarat stalls and she told us that the govt provides them with free transport and accommodation to come out to these trade fairs and put up their stuff. The stall is free as well so all proceeds go directly to the artisans – we were supremely impressed!

There were many stalls of UP Lucknowi Chikan work. I tried to look for a Lucknowi Kurthi, which was reasonably priced at Rs.250, but couldn’t find a nice one of my size . The jewelry stalls didn’t have anything special to offer. Thank God for that or else I would have had a tough time resisting them . There was a food stall too from where I ate pani puris . They weren’t the best I’ve had but not bad either. We left soon after.

On our way back to the hotel, we stopped at a Cafe Coffee Day for some tea. It had very nice interiors and a relaxing ambiance. Tomorrow we’ll head out to Champaner. We’ll probably start early so that we can be done before the afternoon heat wears us down. Officially, it’s winter but the weather during the day is still a little too warm – I can’t imagine what the summer heat would be like!