The next stop on our north-west route is Palampur, a village of tea estates in the district of Kangra. From Rewalsar Lake, there are no direct bus connections to Palampur; we would have had to change buses at Mandi and travel in non-air-conditioned State Transport buses; wasn’t an appealing thought! So yesterday, in Rewalsar, we walked to the local taxi union stand and enquired about taxi fares for a drop to Palampur the next morning. We were told it would cost Rs.1,850. This sounded reasonable for a distance of about a 120kms but we decided to check with some other travel agents before making a decision. However, as we walked away from the taxi stand, one of the men from the union office followed us discreetly to a store where we were buying some supplies. He offered to drop us off privately, or off the union’s record, for Rs.1,600. We accepted immediately! Later, we negotiated to be taken to visit 3 Buddhist temples and a Hindu temple that fall on the way to Palampur before being dropped off, for a total of Rs.2,100 – and in the end, it was money well-spent!

About 30kms before Palampur, off the highway, is the little village of Bir. 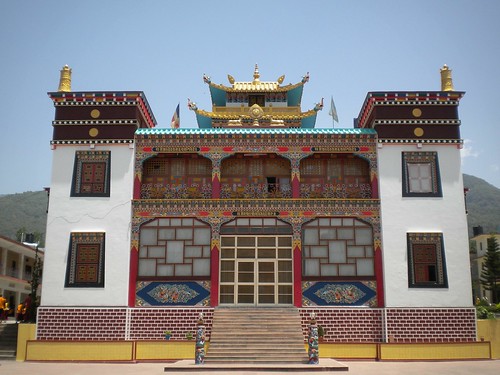 It has a sizeable Tibetan population with a fantastic Buddhist temple in the center. We entered its main gate and crossed a small courtyard, which had a half-open handicrafts store to the left. In front of us was a large 3-storied building that ran across the length of the courtyard. We noticed some scaffolding and several monks working on repainting a portion of the building. Later, we saw that the entire complex was being repainted giving it a fresh, updated look. An opening in the center of the building led us to an inner courtyard. The beautiful Palyul Choekhorling 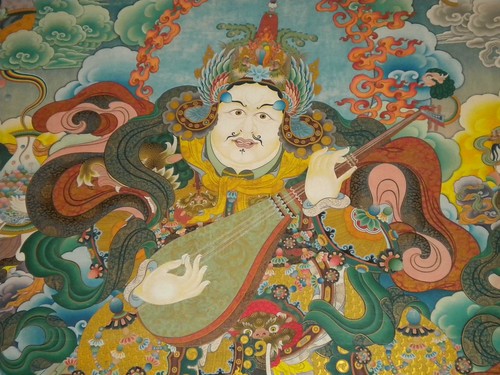 Temple stood within this inner courtyard with dormitories housing monks flanking it on both sides and the front. A flight of stairs led up to the porch of the temple; it was protected with screen windows and doors. Thankfully, the screen door was open and so we happily let ourselves in. Inside, as expected the porch had lovely, colorful murals covering the walls completely – and as expected, we didn’t understand a single one of them; they were beautiful, nevertheless!

A large, red door, adorned with gold-colored ornaments led us into the most beautiful temple 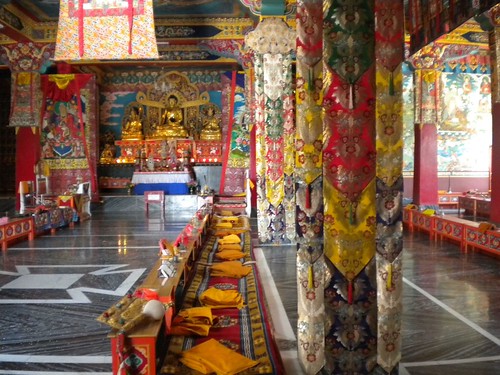 interiors I have ever seen! It was a gorgeous room with Thangka paintings and murals covering every inch of the walls and ceiling. Silk paintings hung from the ceiling and were draped around pillars as well. Instead of just 2 rows of seating that I had seen at other Buddhist temples, this one had rows upon rows of them covering the entire length and breadth of the room. It was all quite colorful and fascinating! Since there was no one else around, we took tons of pictures and examined each object and painting leisurely. Again, just like at Rewalsar, we wished someone would explain the significance of each painting and prayer item that we had seen in the hall. But that was not to be!

Our next stop was the famed Sherabling Monastery, which is about 5kms west of Bir 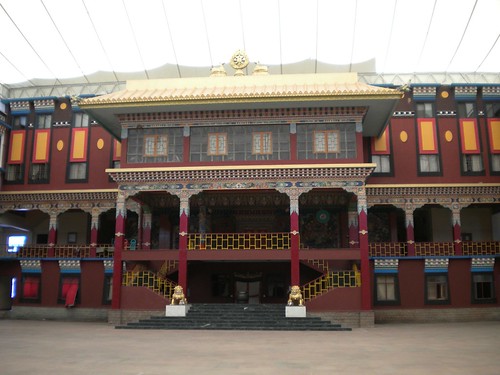 village, set in the midst of a forest. The road, in certain stretches, wasn’t particularly good but the driver expertly wound his way over it and brought us safely to the monastery grounds. Sherabling meaning ‘Seat of Wisdom’ is one of the biggest monasteries of the area. It is set within a sprawling complex with its own driveway and parking area for visitors. Other Buddhist temples we’ve visited thus far have been stand-alone structures flanked on 3 sides by buildings and a courtyard in the center. In Sherabling, though, the temple and the living quarters of monks or students were one structure forming a square building with a large courtyard within. Also, strangely, here the courtyard was protected with a translucent cover on the top, which let through enough, though diffused, light.

The main door to the inner sanctum of the temple is on the 1st floor. Unfortunately, the temple was closed when we got there just before 1pm. Someone told us that it would reopen at 1:30pm so we waited around. At 1:30pm sharp some bells clanged in the building around us and suddenly the place came alive with several young monks appearing out of their rooms with books in hand and walking all over the place to get to their classrooms. We were surprised to see that they were casual and unhurried; they didn’t seem to be in any terrible rush to get anywhere as they chatted and walked calmly. In fact, the monks in Rewalsar too, though definitely serious while chanting within the temple, were otherwise quite relaxed with easy smiles and camaraderie that you would see amongst young men anywhere in the world. For some reason, we had expected the monks to be much more serious-faced and conservative in attitude. It was nice to see that this wasn’t the case!

Just before 2pm, the temple doors finally opened and we were able to take a look at 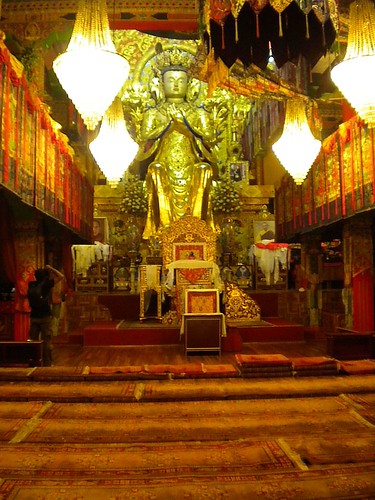 its grand interiors. And what a sight it was! The one hour wait was totally worth it! The hall was not as ornate as the one in Bir but the large brass sculpture of a standing Buddha at the altar was one of most beautiful idols ever! All the other decor in the hall looked insignificant in front of this fantastic sculpture; we were completely over-awed! Strangely there were no low platforms or tables here for the priests. Instead the floor was covered with thick, rich carpets, which we didn’t dare step on. Enormous chandeliers hung from the ceiling and almost made the place look like a magnificent ballroom! None of the Rewalsar temples had been this grand!

From Sherabling as we headed towards Palampur, we came upon the village of Baijnath, which is famous for its 13th century Shiva temple. Since the temple was right by the highway in the center of the village, we decided to stop and pay it a visit. Unfortunately, we weren’t too impressed with it. The temple is enclosed within a small walled courtyard and has a large Nandi bull built of stone facing it. The architecture of the temple is similar to other temples that we have seen of its era and didn’t really look exceptional. We paid our respects to the Shiva Lingam inside and then quietly left.

Our last stop of the day before Palampur was the Tashijong Monastery. About 14kms before 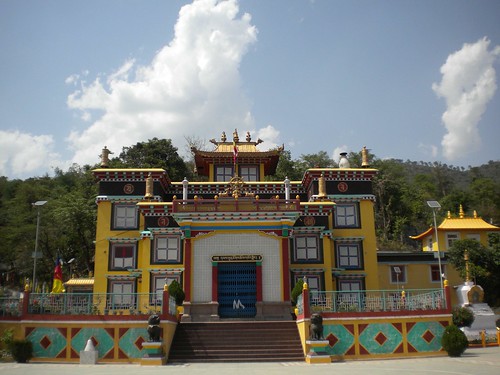 Palampur, we took a narrow road off the highway that led up a hill for a kilometer until we got to the little township of Tashijong. I call it a township because the village is a Tibetan settlement with its own hospital, school, library, temple, stores and cafes. Our driver dropped us off at the foot of the temple complex from where a wide set of stairs led up to it. The facade of the one-storied temple was quite simple compared to the others we had seen. The temple doors were closed but a priest kindly opened the interiors for us and we were able to take a peek. Again, just like the exterior, the prayer hall was also quite simple with no murals or paintings on the walls. At the altar was a Buddha seated on a throne, encased in a glass-fronted golden frame. Silk tassels covered the pillars and gave the hall a colorful look in spite of the bare walls. The priest waited till we had a good look around and then closed the prayer hall behind us as we left.

By this time, we were super tired and were quite sure that we didn’t want to see any more Buddhist temples . Also, the afternoon heat was getting unbearable and we couldn’t wait to get to our hotel. Our driver dropped us off at Palampur’s Hotel Yamini just before 3pm. Thankfully, we were able to order in a couple of chicken sandwiches from the hotel’s on-site restaurant as we hadn’t had any lunch. We’ve been lounging in our room ever since and have made arrangements to have a taxi pick us up tomorrow for a tour of the town; can’t wait to see a tea estate!