Established in the mid 19th century and named after a Governor General of India, Dalhousie was a hill station settlement for the British. Back then it must have been a picturesque town with Victorian churches and colonial homes. But since the British left, nothing much has changed; on the contrary today it retains only a fraction of that charm.

Our cabbie dropped us off at Dalhousie’s Gandhi Chowk (known as GPO in the British days) where someone from Hotel Aarti was waiting to pick us up. Lonely Planet had listed it as a recommended budget option in town with clean, neat rooms. So Madhu had called them in advance and booked us a room for 3 nights. The hotel is situated on Garam Sadak, which is one of the pedestrian-only streets of Dalhousie. 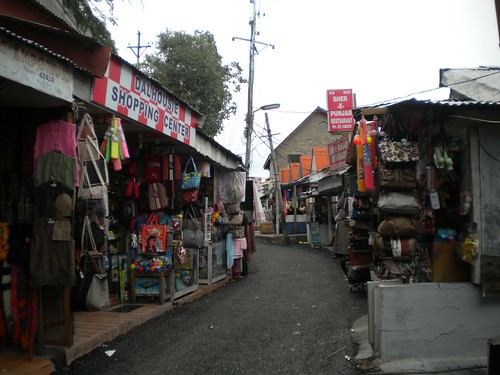 So we hired a porter to carry our bags as the Hotel Aarti rep led us into the crowded street. It was lined with restaurants, street vendors and store fronts selling everything from Tibetan handicrafts to children’s toys. The hotel was past the stores and a few steep steps down from the street. When we eventually got to it, we were appalled at how basic (meaning shabby rooms) and filthy the place looked. Someone was sweeping loads of trash out of the rooms and simply dumping it down the mountain side behind the hotel. We knew we couldn’t possibly stay here! We cursed LP under our breath and set out in search of something better. The porter finally led us to Hotel Greens, which was further along the same street. Here, thankfully, we were able to get a nice room and settle in. Whew!

In the afternoon, we stepped back out on to Garam Sadak and had one of the nicest meals at Napoli restaurant; great food and good service! Then we browsed through the stores lining the street stopping at the govt-run, textile store called Bhuttico where two bored salesmen looked least interested in making a sale. Further on, we stopped at one called Tibetan Handicrafts where two elderly Tibetan women sat benignly behind the counter of a store that sold t-shirts, jewelry, shawls and handicrafts made by Tibetans. I bought a necklace two, actually! One that I intend to wear and another that is large with hand-woven, colorful beads and is too heavy to wear. We plan to frame the latter; it’ll look gorgeous! Prices are fixed here and proceeds go towards the benefit of Tibetan refugees, giving us the perfect excuse to shop!

In a corner of Gandhi chowk, stands the pretty St. Johns church. When we walked up to its main entrance, 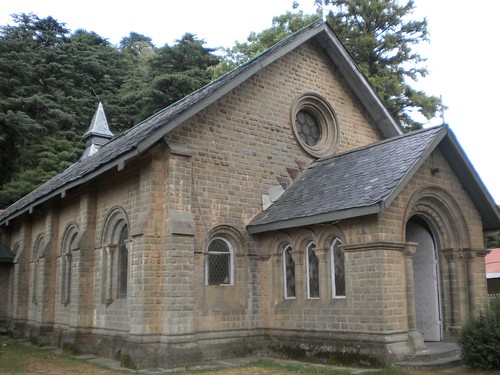 we found it padlocked, but another gate in the rear was open.  A man, who was probably the resident priest, beckoned us to enter the church courtyard and asked us to walk out to the front while he opened up the church. There were other visitors waiting as well. The exterior stone facade of the church is simple yet elegant. However, the grass courtyard around it looked a little unkempt with weeds and bald patches. On the other hand, the interiors were lovingly maintained with a fresh coat of paint, polished wood and spotless floors. The altar with stained glass windows behind it, looked stunning in its simplicity. The dark wood ceiling and the cherry-wood stained pews, looked marvelous as well!

Later we walked back thru Garam Sadak, passing our hotel and continuing to the other chowk of Dalhousie, Subhash Chowk. 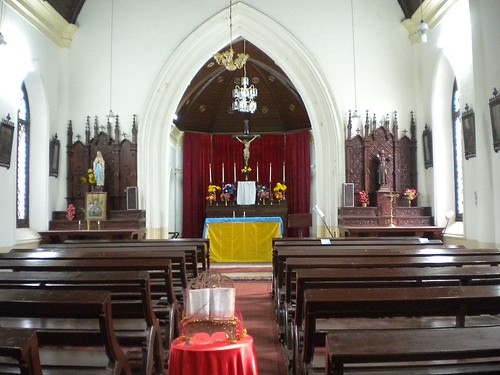 A large statue of the freedom fighter, Subhash Chandra Bose, stands at one corner of the chowk from where views out to the Pir Panjal range of mountains and the valley below is awesome! Right across the street from here is the St. Francis’ Church. It sits atop a small hillock and has a stone facade similar to St. Johns Church, except that this one has a bell tower as well. The walk up to the church was lined with framed instances from Christ’s arrest to his crucifixion. At the top, a small flower garden has been lovingly nurtured next to the church and has been covered with a protective net. Inside, although the doors to the church were open, a padlocked grill separated us from its interiors. But we could peek in and I could also take a picture by squeezing my camera lens through a thoughtfully provided opening in the grill. The interiors were simpler than that of St. John but just as nicely maintained. As we exited the church, we saw a small enclosure with many geese, rabbits and turkeys strutting around. A water tank in their midst looked like it could do with some cleaning; not a pretty sight!

I bought a Butta (roasted corn on the cob with a generous smearing of salt, chilli powder and lime juice – yumm!) and munched on it, while we walked on a street that heads southwest from Subhash Chowk and winds right back to it after a kilometer. It was a pleasant walk and the road was relatively clean. En route we noticed that most of the hotels were old and rundown. So were the homes that must have looked quite grand back in the day; we felt sad for Dalhousie’s lost days of grandeur!

The next day we woke up late and didn’t step out until after lunch when we went in search of a Tibet market. We were first sent to a narrow, shopping alley that was just a little east of Gandhi Chowk. It was a claustrophobic space with tiny stores on either side selling almost exactly the same stuff: hats, woolens, t-shirts, undergarments, and other knickknacks! We had hoped to find stores selling Tibetan stuff instead we found stores selling locally produced garments sold by Tibetans. Disappointed, we left quickly!

Later, a shopkeeper told of us another Tibetan market, which was close to the bus stand, which is at the northwest edge of town. We wouldn’t have bothered checking it out except that the map showed us that an ATM was somewhere out there too. So we walked to there and found that this market did sell some Tibetan stuff but again it was nothing as nice as that in the Tibetan Handicrafts store at Gandhi Chowk. Moreover, it was a short strip of just about 5 or 6 stores; that hardly qualified as a market!

Our guidebook said that about a kilometer west of the bus stand is a military cantonment area, 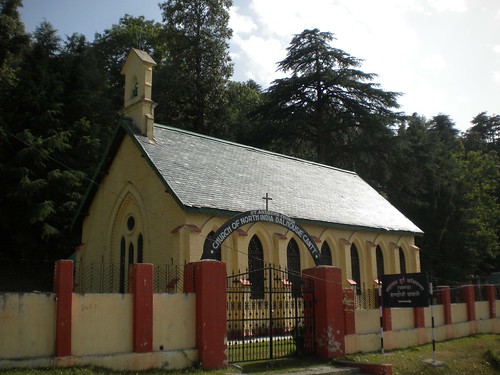 where another British-era church stood. Since the Tibetan market was quite close to the bus stand and since we had nothing else to do in Dalhousie, we decided to go look for the church. It was an easy, 1km downhill walk to the cantonment area. However, when we got to the church, we were quite disappointed to see that its gates were locked. A local told us that it opens rarely and that too only on specific occasions. The exterior of the church didn’t look as nice as the other two we had seen in town, so it had been a wasted effort to get there.

Dalhousie really doesn’t have much to offer travelers. It definitely doesn’t have the charm or vibe of Shimla. Nor is it a clean place to walk around in, Garam Sadak being the worst of them all. Most visitors go up to Kala Top a hilltop sanctuary from where the views are supposed to be good. But locals discouraged us from bothering with it, saying that it was just another tourist trap with old buildings and some new stores. Then there are walks to some nearby streams but even those spots are just for visitors to have something to do in the area.

We stayed for one more day mainly trying to recover from the cold that I have now contracted and research the next leg of our travel, which will take us out of our beloved Himachal Pradesh and into Jammu & Kashmir. Of course, there’s more to see and do in HP but that’ll have to wait until we finish with J&K and Ladakh. For now, we are ready to move on from Dalhousie!

One Response to Dalhousie