Today morning we woke up with bed-tea, which was brought to our room at 8am, followed by breakfast at 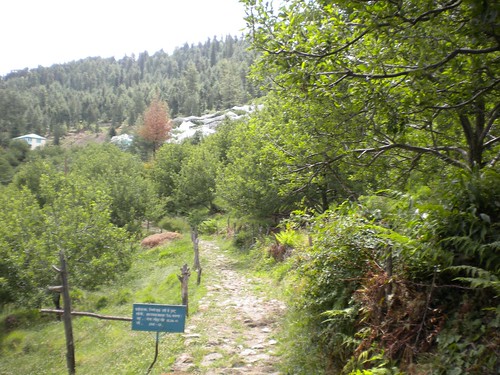 9:30am at Banjara’s dining hall. Seeing that the weather had cleared, Mr. Thakur offered to take us on a 2 ½ hour hike through the Saroga forest, which is on the slopes above Thanedar. We readily accepted and one of the other couples agreed to join us as well. So around 11am, armed with cherries picked from Mr. Thakur’s orchards and an umbrella each, the five of us set out on our nature walk. We took stone steps that led up from the main road to the hills above passing through orchards and homes that had pretty, colorful rose bushes planted in their front yards. The climb was steep and it tired us out quickly. But we eventually got on to a forest trail that had a slight gradient before flattening out completely in the thick woods. En route, we badgered Mr. Thakur with innumerable questions regarding apple-farming and the trees and flowers of the region. He answered them all patiently and gave us quite a bit of information. He pointed out apricot, almond, cherry, peach and plum trees, and strawberry and raspberry plants that grow in the area. For city-bred folks like us this was just absolutely fascinating! Except for the plants, most of the trees had young, green fruits, which will grow bigger and colorful, and eventually become ready for harvesting in a couple of months’ time.

As we walked deeper into the Saroga forest, Mr. Thakur pointed out the 3 main trees that are found 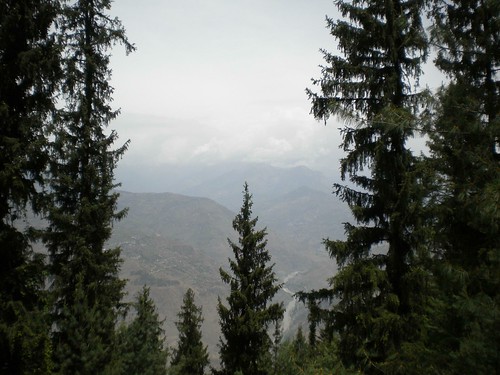 in this region: Blue Pine, Spruce and Deodar. I learnt that Pine trees grow at 5000ft elevations or lower, while Blue Pines grow only at higher elevations; very interesting! But the highlight of the trek was when we could see the serpentine shape of the river Sutlej nestled in the valley below. Mr. Thakur informed us that to the left of the Sutlej is the Kullu valley while to its right is the Shimla district; we were so excited by this sight ! Later, in a grassy clearing, we sat down for some rest and to snack on cherries. At around 1:30pm, we started heading downhill. We could have continued in the forest for another hour and a half by which time the trail would have deposited us near the Tani Jubbar Lake. But we were all tired and decided to get back to the retreat where another great meal was awaiting us .

In the evening, since the weather was still holding up, Madhu and I had our evening tea with hot pakoras in the outdoor seating area of the dining hall; it had the best views ever! Then we set off to explore Barobag Hill, which is the highest point in Thanedar. To get there, we walked back towards the bazaar and then found stone steps across from a school playground that led up to the hill. The climb was not hard but gradual and pretty, lined with private orchards and homes. As we neared the top, we asked an elderly gentleman, who was standing at the gated entrance to his house, for directions to Harmony Hall, Stokes’ home in Barobag. He asked us to just continue on the same path. So we continued on till we passed some telecom towers and came upon the temple built by Stokes. His house is just behind the temple with orchards separating the two.

Built in 1912 and named after his ancestral home in New Jersey, Harmony Hall is where Stokes lived with his 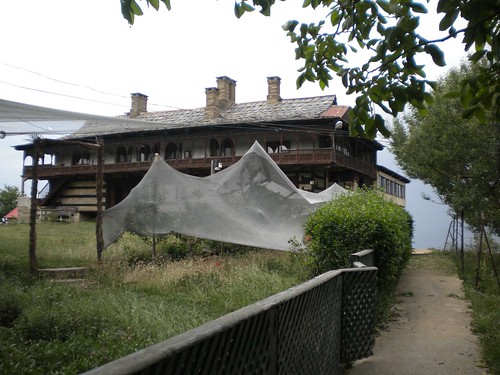 family in Thanedar. It is a beautiful property with a huge front-yard and a lovely house, which is a mixture of Himachali and European architecture. We took pictures from the outside, wishing we could peep in, and then walked back to the temple. On the way, I noticed a large tree with big, bright green leaves that didn’t look like any we had seen in the morning. It had small green fruits as well. I picked up a fallen fruit and when I later showed it to Mr. Thakur, learnt that it was a walnut . Apparently, Barobag, and especially Stokes’ family estate, has many walnut trees. This place is a horticulturist’s dream!

Stokes built the Paramjyotir Mandir in 1937 as a place to meditate and pray without any idol worship. 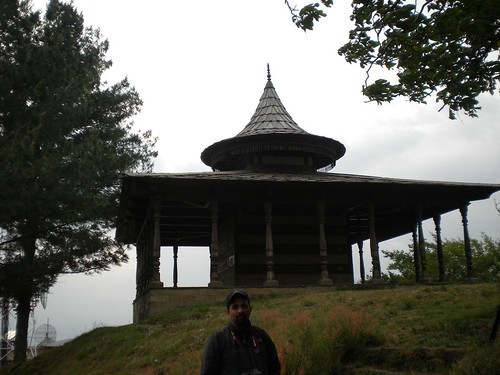 It is a beautiful square structure built of gray stone and Burma teak with a slate roof. A pillared porch surrounds the structure giving it a very airy feel. Except for the ugly telecom towers in the background, views out to the valley are excellent from here. The outer walls of the structure have Shlokas from the Gita carved onto them in wood, because of which the temple is also locally known as the Gita temple. Inside, is a square hall, which is empty except for a Havan Kund, which is used for rituals. In spite of its simplicity, this was one of the most moving places we’ve visited.

As we walked back down, we passed the home of the man whom we had asked for directions. This time he was walking about with his wife who called out to us. They walked up to the gate and chatted with us amiably. We learnt that the man, Mr. Manmohan, had lived in Bombay during his younger years, when he acted in Hindi movies . He has worked with yester year heroes like Som Dutt who were from the 60s. Today he and his wife are leading a retired life here in Barobag; I was most envious of them.

Back down on the main road to Banjara, we came across a few women carrying large cans of water on their back. They all looked at me and gave me friendly smiles. One of them even stopped to chat . She was super friendly and asked us about our Himachal trip. She even invited us to her house for tea but we had to politely decline. Himachalis are the friendliest and the most wonderful people we’ve met in India; have I said this enough yet!?

In the evening Mr. Thakur organized a bonfire for all his guests on the property lawns. We had a wonderful time by the blazing heat, sipping on Apricot wine, munching on barbecued chicken, potatoes, mushrooms and cottage cheese, while exchanging travel stories with guests who had arrived today. As we settled down to dinner later, I was almost saddened by the thought of having to leave Banjara tomorrow¦