When we started out from Shimla, our aim was to explore the Pabbar valley, which is in Himachal’s southeast corner. The little village of Khara Pathar falls on the way and therefore became our first stop. It is located quite scenically in a forest of Deodar trees and apple orchards at a height of about 2500m. 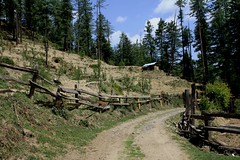 The main attraction of the place, though, is the 6km trail that starts from the village and leads uphill to the source of the river Giri Ganga and a temple dedicated to Goddess Durga. This was exactly what we had stopped at Khara Pathar for.

However, after last evening’s torrential rains, we weren’t sure if the trail would still be pliable. Thankfully, the morning air was crisp, sunny and dry making the hotel manager assure us that there would be no problem whatsoever. So after a heavy breakfast, we packed a couple of vegetable sandwiches and a bottle of water in our daypack and set out to conquer the trail. On our way out, while describing the route, the hotel manager said ‘Haar ke nahin aana!’ (Don’t give up and return!)  LOL. With that one statement he managed to scare me and made me doubt my ability to walk up 6kms and back ! We probably didn’t the look the sorts who could do it  LOL.

The trail to Giri Ganga starts about 500m west of the hotel on the state highway to Rohru. 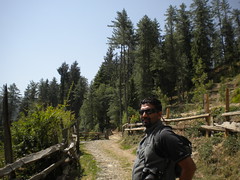 It’s a dirt track that forks right off the road and climbs steadily uphill. We were relieved to see that it was a wide track with a very gradual gradient. For those not inclined to walk (and for those who don’t want to give up and return  LOL), jeeps can be hired to take them to the top and back. As we trudged up, we saw one jeep, with no passengers, coming down the route – it was the only one we saw the whole day!

And what a trail it is! Mostly shaded by large Deodar trees and lined with green meadows with views of the valley below, it is one of the best Madhu and I have ever been on. Since the climb wasn’t steep, the walk was quite pleasant and not strenuous at all. So we strolled along, took plenty of pictures, petted and fed 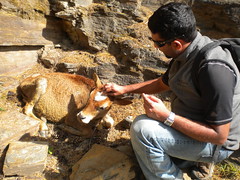 a stray calf, and even sat awhile gazing out into the lovely scenery! It was absolutely blissful! The path was mainly muddy with a few rocky patches. The rocks looked exactly like the gold-specked flagstone that Madhu and I spent quite a bit on to pave our backyard .

Just as we turned a corner towards the last quarter of our trek to the Giri Ganga temple, not only did the track change from a muddy one to an extremely rocky one, but the weather too changed from sunny and warm to an overcast, cool one. At this point, we hurried our pace and walked as quickly as we could. Thunder sounded in the distance and we realized that rains were imminent. Luckily, it had just begun to drizzle when we stumbled upon the Giri Ganga temple complex with a narrow stream of the Giri Ganga river flowing right by it. It was about 11:30am then; we had taken just about 2 hours for the ascent.

The temple complex consists of a couple of unused, almost-in-ruins structures, a relatively 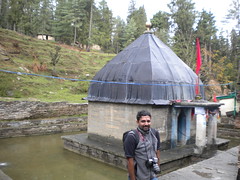 newly built cottage, a traditional, stone-and-wood cottage with a thatched roof and 3 shrines. The main shrine faces the traditional cottage and is built on a stone platform, which is in the center of a large water tank. It’s a simple, square, stone structure with a curving, conical roof. This shrine is dedicated to Goddess Durga. The interiors are dark except for the dim light of the diya that looks like it’s kept burning at all times. The other two shrines are placed above the water tank, facing each other. One of them has the idols of Lord Ram, Laxman and Sita, while the other has a large, marble Shiva Lingam. Just as we accepted the Prasad offered by the resident Panditji in the Durga temple, it started to rain quite heavily!

At first, the lovely pitter-patter of rain and the beauty it added to the fantastic scenery, exhilarated us! 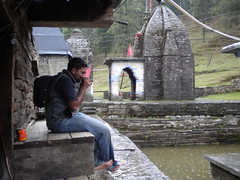 We found a wooden bench under the shade of the cottage, facing the shrine and sat there enjoying the beautiful moment. The Panditji thoughtfully brought us a couple of glasses of steaming hot tea and we were quite thrilled. But soon the temperature started to drop and my bare feet started stinging. We hurriedly wore our shoes and started praying for the rain to subside. But the rain Gods were in no mood to listen to us . Not only did it rain heavily, but there was immense thunder and lightning as well. At one point, it got cold enough for a hailstorm too. Dressed in short-sleeved t-shirts and fleece vests, we found the weather to be a little too cold for comfort. And this went on for nearly 4 hours! The Panditji brought us some more tea later but it didn’t help much. Madhu and I started wondering whether we would be stuck there for the rest of the evening¦

Thankfully, just before 4pm, the rain eased a bit. The sky was still grey and overcast with a light drizzle, but the thunder and lightning had subsided completely. We took this opportunity to bid adieu to the friendly Panditji and started on our long trek back. This time around we didn’t waste any time and kept a brisk pace going. However, the slushy ground and slippery rocks slowed us a bit as we had to be careful not to fall. The trail had grown more beautiful since the rains but we tried not to get distracted . With some focused walking, we managed to get to the base of the trail in less than 90minutes. By the time we got back to the hotel, the drizzle had increased to a light shower. But we didn’t mind too much – after all we had made it to the temple and back without giving up .

When we got back to our room, we were greeted with the sight of a perfect rainbow from our balcony . Looking back at the day, we think it was probably one of our most memorable ones.