We were in Bombay since April 12th and in the past 2 ½ weeks, we managed to catch up on most of the paperwork that needed to get done and also spend time with both sets of parents as well as my siblings. By the end of it all we were itching to get out again so yesterday we caught a 9am flight from Bombay to Chandigarh. From the ISBT at Sector 43 we boarded a Shimla-bound Volvo bus run by Himachal Road Transport Corporation.

I’ve never had a problem traveling on hilly, windy roads. But yesterday was different. When we got to the airport at Bombay, we had more than an hour to kill before the flight. So Madhu and I sat at a coffee shop 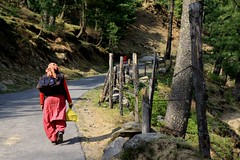 and I drank a large glass of black coffee. Immediately after that, I felt a little uneasy. Later when we boarded the Volvo bus for Shimla, I felt that same uneasiness and should have avoided eating lunch. But I was hungry and when the bus stopped at Parwanoo for a break, I gobbled up some rice, daal and raita. After that, as the bus climbed higher and higher on winding roads, my stomach churned terribly, nauseating me completely. I wondered if the paper bags, thoughtfully provided by the bus staff, would be enough to hold me . Thankfully, by keeping my eyes shut and focusing on my breathing, I didn’t have to use the bags but it was one of the most uncomfortable bus rides of my life !

We alighted at Shoghi, some 13kms before Shimla, and stayed the night at Mr. & Mrs. Aggarwal’s Sunrise Villa, the same place we had stayed at while exploring Shimla, Kufri and Fagu back in April. The couple didn’t seem to remember us but were nice as always and we had a very pleasant and comfortable stay. We noticed that they had begun work on adding yet another floor to their 3-storey villa; business must be good !

Today morning, after an early breakfast of yummy Aloo Parathas, we checked out of Sunrise Villa at 9am, walked down to Shoghi bazaar and hired a cab to take us to Lakkar Bazaar’s bus stand in Shimla. From there we boarded a 10:15am bus to Khara Pathar, our first sight-seeing stop of this trip. My sister had suggested that we suck on hard, sugar candies to avoid getting nauseous during hilly bus rides. We had forgotten to stock up on it for the ride to Shimla. But today we remembered and bought a couple of packets of them from the Lakkar Bazaar bus stand. And thankfully, they worked miraculously well!

The bus ride from Shimla to Khara Pathar took more than 4 hours, covering just about 80kms! The 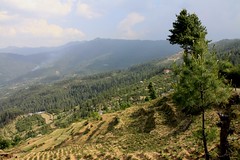 bus stopped for an hour in between at a place called Chhaila but 3 hours to cover 80kms is still not a good pace. The going was painfully slow because beyond Theog, the narrow state-highway is just about a lane wide, with potholes or no visible concrete road at times. At times our bus came almost face-to-face with vehicles going the other way; it was downright scary! A large billboard at the point where the bus exits NH 22 to get onto the state highway proclaims that the road from here until Rohru is being widened with funds from the World Bank. The project is slated to be complete by the end of May, 2011. We saw some work going on for this but not much; it’s a little hard to believe that the entire stretch of about a 100kms will be widened in a year’s time. There’s way too much work left and access is not easy with sheer cliff walls that need to be blasted off, on one side and a river gorge on the other. But the route is absolutely breathtaking, spotted with tiny hamlets, apple orchards and cedar woods.

When we alighted at Khara Pathar we were a little disappointed to see that the village was more of a truck stop with many stores selling automobile parts. It was dirty and a little stinky too! Madhu had called Giri Ganga Resort, managed by HP Tourism, in advance and thankfully, it turned out to be right by the road but a few meters away from the main market area, in a nice secluded spot. We checked in, ate a late lunch and seeing that the weather was quite lovely (not too sunny with a cool breeze), decided to walk around a bit.

The friendly hotel manager suggested that we walk back up, past the village market and then 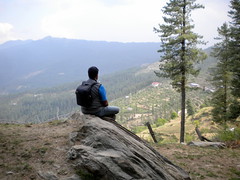 take a road that goes uphill, providing fantastic views of the valley as well as Kuppar Peak, which was across it. We took his advice and walked. Once past the dirty market area, the road got absolutely wonderful and the views just kept getting better and better as we got higher. Large cedar trees and green apple orchards lined the road on either side. It was one of the nicest walks we’ve been on in Himachal!

We saw many school kids returning home with large school bags on their backs. They walked steadily uphill but took breaks at regular intervals, sitting on rocks or grassy areas by the road. The little ones were accompanied by older kids and they played around happily with each other; it was such a sweet sight ! We must have walked at least a couple of kilometers when we heard thunder in the distance. Not wanting to get caught in a storm, we decided to head back. En route we asked the kids where the road led and they said that it led all the way up hill to a village called Gaurighat. They said that it would take about one and a half hours to get there! We wondered if these kids walked everyday all the way there and back for school!? Unbelievable!

On our way back, we did get hit by a few droplets but the storm hit only after we were in the safe confines of our hotel room. Right now, as I sit here typing away, I can hear the heavy downpour outside accompanied by more thunder and lightning; it’s beautiful yet worrisome! I hope it dries out tomorrow and allows us to hike up to the source of the river Giri Ganga, which is the main reason for our stop at Khara Pathar. Not much we can do about making that happen, though¦