Yesterday morning we took a cab from Palampur for the 50kms ride to Mcleodganj. The previous evening we had called a couple of hotels to check for accommodation and were appalled when none had any vacancies; this was peak tourist season. But we figured that we would surely find something once we got there. In Mcleodganj, we went directly to Hotel Hunted Hill on Jogiwara road; they had said that they may have a room available. However, when we got there, our only option was a room in a guesthouse in an alley next to the hotel. Not wanting to walk around in the summer heat looking for more options, we took what we got and settled in.

Mcleodganj has an interesting history and an even more interesting name. I’d always wondered 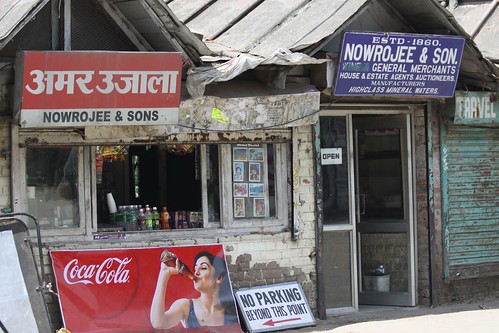 why it sounded so foreign-ish and finally learnt that it was named after a 19th century British governor of Punjab, Sir David Mcleod. Apart from a military cantonment, there were two civilian settlements in the Dharamsala region – one at Mcleodganj and one at Forsythganj (named after yet another British official) – making it a popular summer retreat for the British. However, after the earthquake of 1905, which destroyed most buildings in the area and killed thousands of people, the British moved away. A utility store, Nowrojee & Sons, established during the British days, however stood its ground even after the earthquake and eventually was the reason for Mcleodganj’s resurrection. In 1960, its owner Nauzer Nowrojee, persuaded the 14th Dalai Lama of Tibet, who was exiled from his country, to settle here. And when the Dalai Lama obliged, his followers streamed in behind him and soon the settlement grew to what is today known as ‘Little Lhasa’!

Mcleodganj is really a strange mixture of a place. Like Rewalsar Lake, it attracts thousands of Buddhist devotees and could be termed as a religious destination. But then it doesn’t really feel like one. And that’s probably because, unlike Rewalsar Lake, it has attracted a lot of devotees from western countries as well who have added their own Bohemian flavor to the area. This in turn has attracted thousands of travelers from all over the world who find the unique blend of Indian, Tibetan and Western cultures, all in one tiny village, quite interesting. So today it is a chaotic, congested place with narrow lanes lined with stores and cafes that cater to every need of the devotee and the traveler. After enjoying the peace and serenity of rural, untouched Himachal, Mcleodganj almost gave us a culture-shock !

On the day of arrival, we ambled around the village trying to get ourselves oriented with the place. 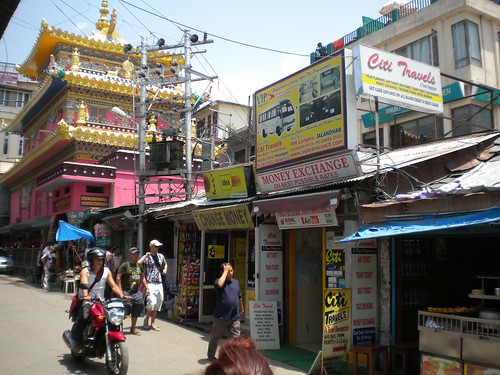 Our guesthouse was at the end of Jogiwara road and from there it was a short but steep uphill climb to the chowk where Nowrojee’s store stands. About 6 narrow lanes radiate out of this chowk. Some of them, which wind within the village allow one-way traffic only and that makes life easier for pedestrians like us. But lanes, like Bhagsu Road, which connect the village with the rest of the region, have to allow 2-way traffic and this leads to complete chaos most times. Add to this, stinky gutters, animal dung and general filth! Our first evening there, Madhu and I were quite disappointed. Even the food didn’t turn out to be as exciting as we had hoped it would be. We tried Indian for lunch and that turned out to be just like the Indian fare dished out in the Indian restaurants in the US; edible and even tasty, but not quite Indian. For dinner, we decided to give Nick’s Italian Restaurant a try; it had great reviews online. Not that we expect authentic Italian food in a village in India but the Raviolis we ate there were neither presented well nor did they taste any better .

The main place to visit in Mcleodganj is the Tsug-La-Khang complex, which houses a Buddhist temple, 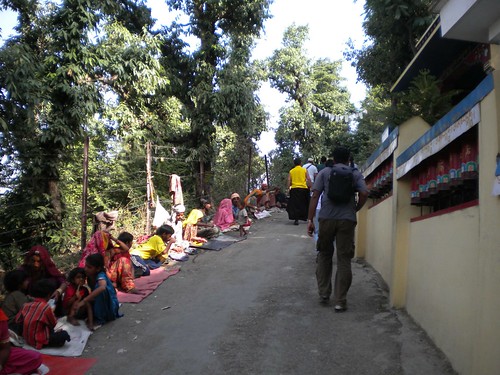 the Namgyal Monastery and the Dalai Lama’s residence. So today morning, we started out early and headed there. Since we were at the eastern end of Jogiwara road, we continued southeast on it and then turned left onto Library road. About half a kilometer later, we saw a dirt path going left into the forest. It was lined with a few beggars and many Buddhists with prayer beads in hands were taking this path. Since our map showed that the temple complex was somewhere to the left, we followed the rest of the crowd and took the dirt path as well. The narrow trail was completely lined with beggars on either side and almost all the Buddhist devotees were giving them money as they walked on; no wonder there were so many of them! Some of the beggars were lepers or physically handicapped or old and helpless, but to our horror, there were some perfectly healthy, young men and women begging as well, unashamedly; I guess there was easy money to be had! The queue of beggars continued until the dirt trail looped back towards Library road and finally led us to a tarred road and the Tsug-La-Khang complex. We had apparently taken the wrong left turn from Library road; if we had gone a little further up, we could have avoided the beggar-ridden dirt trail and taken the next left to the temple complex.

Before entering the temple complex, we stopped for breakfast at One Two Three Cafe, which was right next to it. Here we had what was probably our nicest meal in Mcleodganj! We ate cheese toasts and pancakes with coffee and fresh orange juice. Everything was well made and well presented! Plus we found seats outside on the porch from where it was fun to watch the stream of humanity passing by. We spent nearly an hour here. 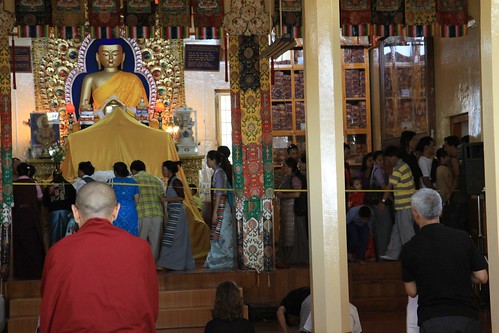 strict instructions not to disturb nature in any way. And that’s exactly how it has been built. The temple is a modest 2-storied structure without any embellishments. It overlooks a large, shaded square, beyond which stands the Dalai Lama’s residence. We first headed up to the 2nd floor of the temple structure; it houses the Kalchakra and  Tsug-La-Khang temples. We visited the Kalchakra temple first where pictures were not allowed. It contained a small idol of Avalokiteshwara and a central painting of Lord Buddha. Several Lamas sat in its hall chanting softly. We paid our respects and then headed to the main temple. Here at the altar was a 9ft seated idol of Lord Buddha while 12ft images of Padmasambhava 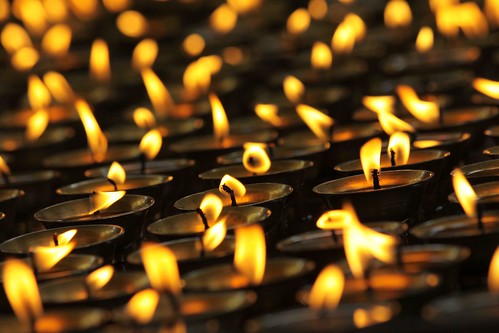 Many devotees lit diyas outside the temple and this was a wonderful sight. We sat around watching them and lights for quite a while. In spite of the crowds, the place was not chaotic, affording everybody a little peace of mind to pray with. Later we descended to the lower floor, crossed the square in front of the temple and tried to peek through the gates of the Dalai Lama’s residence. Unfortunately, as expected, visitors are not allowed within its hallowed grounds.

For lunch we stopped at the Norling Restaurant on Jogiwara Road; it had a huge banner 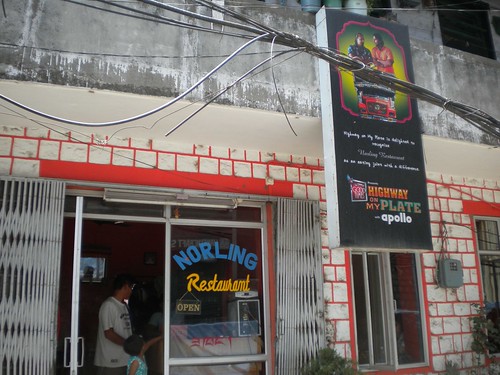 outside its door, proclaiming that it was recommended by Rocky and Mayur, hosts of NDTV Good Times’ ‘Highway on my Plate’ show . Madhu and I are big fans of this show and were thrilled to try a place recommended by them. The restaurant was small but stylish with bold, orange colored walls, black and white pictures and wooden furniture. The Tibetan food we ordered turned out to be quite good too. I wish these guys would advertise more of such recommendations in other towns as well!

Not satisfied with a nice lunch, we then stopped by the Chocolate Log Cafe, for dessert. 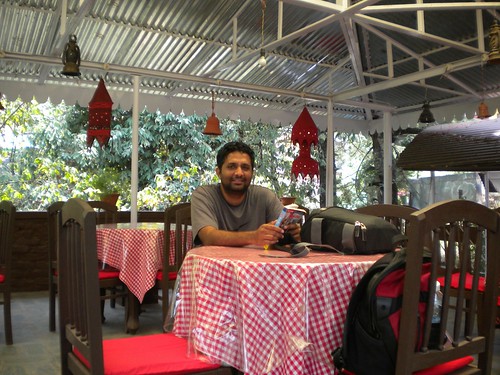 It’s a lovely 2-storied cafe with seating on the upper floor and a bakery counter downstairs. We ordered and paid for coffee and a slice of their Chocolate Log Cake at the counter, which was manned by an elderly couple. The seating area is open-air with a tin shed supported by thin pillars. It is a nicely designed space with chocolate-colored walls, chocolate-colored furniture and colorful lamps that hung from the ceiling. The order was brought to us here and we enjoyed one of the best chocolate cakes we’ve had in a while. It came with 2 scoops of chocolate ice cream and chocolate fudge; an amazing treat!

After staying away from the afternoon heat, we ventured back out in the evening for a stroll. There was nothing more to ‘see’ in Mcleodganj so we decided to just take it easy and lounge. After tea at a lovely cafe on Bhagsu Road, we went to the roof-top Excite Restaurant at the chowk for dinner. Here we gorged on Chilly Chicken, Tandoori Chicken and Beer; a perfect end to the day and to our stay in Mcleodganj!

We know that there are a few things outside Mcleodganj that could be explored like the villages of Bhagsu and Dharamkot to the north, the Church of St-John-in-the-Wilderness to the southwest and Dal Lake to the northwest. But for some reason we are not in a mood to do any exploring. Maybe it’s the incessant crowds, the terrible afternoon heat or the not-so-nice accommodation we ended up at, but we have had enough of Mcleodganj and are looking forward to moving on.