After touring Chamba town, our cabbie drove us up to Khajjiar, where a large meadow fringed with 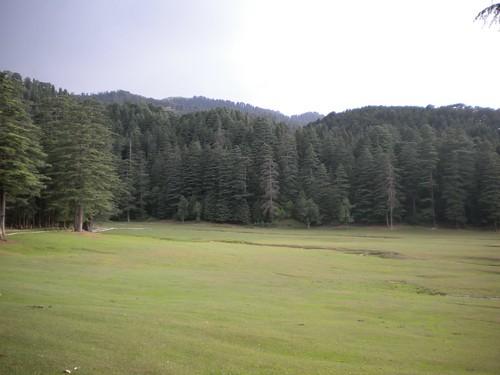 Deodar trees, makes it one of the most idyllic spots in the district of Chamba. Most people visit it as a day-trip from Dalhousie, but since we had the time, we decided to stay overnight. Moreover, the afternoon heat has been quite bad again over the past couple of days, so we realized that it would be best to explore the area in the evenings and early mornings.

Originally developed as a golf course by the British, Khajjiar’s large, undulating meadow is now a very popular 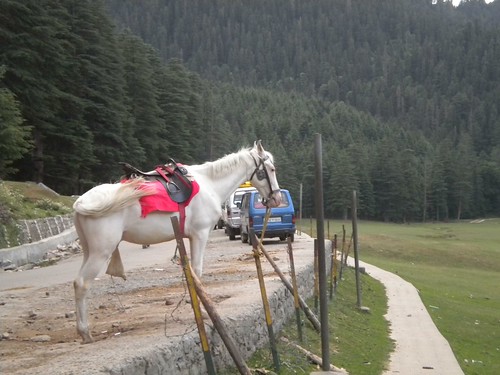 picnic spot. It has a tiny lake in the center and a paved walkway that encircles it completely, giving visitors a chance to view the fantastic scenery from all angles. When we had heard its nickname ‘Mini Switzerland’, we had laughed but seeing it person, we felt that the tag was apt. In the late evening, when we ventured out to explore it, we were blown away by its picture-postcard beauty! By then the crowds had thinned too; all the day-trippers had left, leaving behind a serene landscape for us to enjoy. Just like at Mahasu Peak in Kufri, there were quite a few horses available for hire. Thankfully, though, there weren’t too many of them around and the place didn’t feel as commercial or chaotic. We walked along the walkway for a while, careful not to step on horse poop and then found a clean, quiet spot on the grass where we sat and watched the lovely landscape and picnicking families; it was both peaceful and entertaining !

Later we walked up to the stores and restaurants that border the meadow at one end. Here, nestled in a corner is the 17th century temple dedicated to Khajinag, from which the area derives its name. Sadly, a couple of posters advertising neighboring dhabas were stuck on the temple’s exterior walls, ruining its look completely! 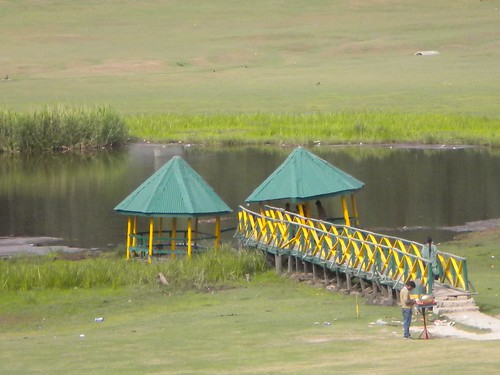 restaurants there. Later we walked to the lake in the center and sat inside the gazebos that have built at the water’s edge. Unfortunately, the place was quite littered and made us a little uncomfortable. The meadow, in general, although littered with poop of grazing cows and sheep, is relatively clean. We saw a man going around collecting all the plastic litter that people had thoughtlessly left behind (seriously, when will we ever learn!). But he seems to have missed the area around the lake completely. While we sat there for a few minutes a young kid came up to us asking if we wanted to hold a little white rabbit that he had in his basket . I happily obliged while the kid took a picture of me with it .

We then walked around the meadow on the walkway, completing the circle. 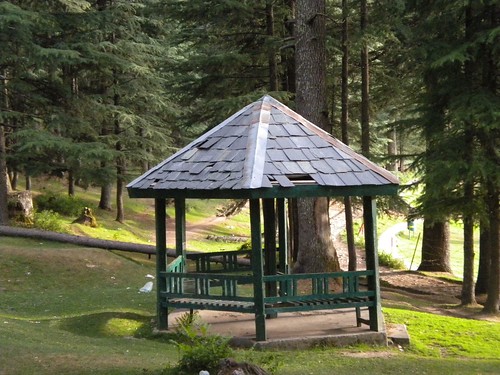 We paused for breaks at the wooden gazebos that have been thoughtfully built on the edges, shaded by Deodhar trees. Tucked away in a quiet, scenic corner were a couple of cottages run by HPTDC. They looked a little rundown but the location is unbeatable!

Apart from horse rides, one other activity that seems popular in Khajjiar is ‘Zorbing’. 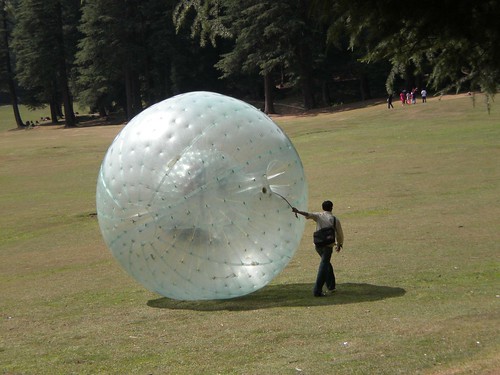 I cannot imagine why anybody would ever want to sit in a claustrophobic space inside a huge plastic ball and then get rolled mercilessly around until they are ready to throw up! I guess it’s a guy thing. We saw a few young boys get into a Zorb for a ride. Fortunately, or unfortunately, depending on how you look at it, there are no big slopes in Khajjiar for the Zorbs to take off. The vendors manually push it around in the meadow and therefore it never really catches much of a speed; the boys came out looking almost a little disappointed .

In the evening, as we sat sipping tea outside our guesthouse, a young lad asked us if we had seen the apple orchards of Khajjiar. When we said no, he offered to take us there himself. We had heard the horsemen offer rides to see apple orchards, so out of curiosity we took up the boy’s offer. His name was Sanjay and he said he was in the 8th standard at school, which meant he was probably 12 or 13 years old. But he certainly didn’t look it; we would have guessed him to be less than 10. Yet he had a maturity and an air of confidence, which was absolutely endearing . 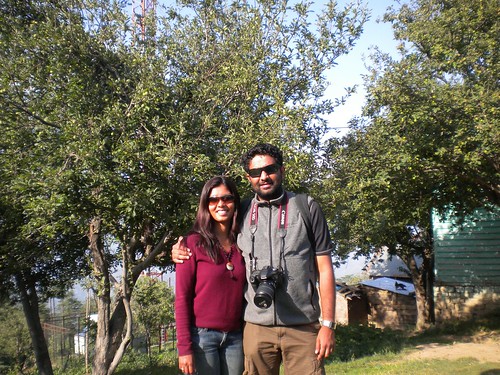 brought us to a cluster of homes, behind which stood a small apple orchard. We were a little disappointed but we didn’t have the heart to tell this to the kid. I guess for visitors from the neighboring plains of Punjab and Jammu, the sight of an apple orchard, even if it comprises of just a couple of trees filled with fruits, must be a unique one, just as it had been for us when we first laid eyes on it in Shimla district. Anyway, the views from the orchard were lovely and we had enjoyed little Sanjay’s company, so it was completely worth it. He took pictures of us with my camera and we could see that he must have done this routine with other visitors as well. With such an enterprising attitude I’m sure he’ll do well in life .

After the orchard visit, we walked east on the Khajjiar road towards Chamba. 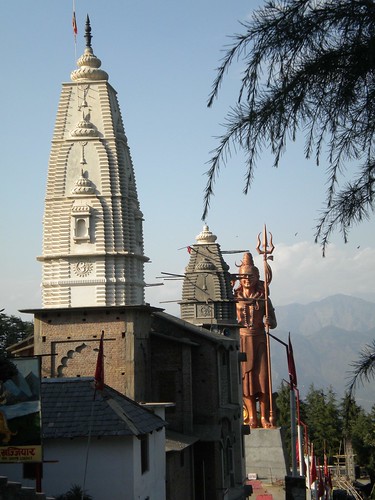 A few meters down, we came upon a lodge, behind which a new temple dedicated to Goddess Durga is under construction. Behind the temple is a parking lot and at the end of it stands a huge, copper-colored, standing statue of Lord Shiva. It can be seen from afar as one drives up to Khajjiar from Chamba just as we had. It’s an interesting-looking temple complex, except that it’s almost hidden by the lodge in the front.

We had planned on staying just one night in Khajjiar as, although it’s quite beautiful, there’s only so much to see and do here. But we stayed an additional night just to relax and help Madhu get over a terrible cold that he had developed in Chamba. However, today it has turned worse with coughing, tiring him out completely. I’m afraid it’s not going to disappear without medicines to fight it. So tomorrow we’ll head to Dalhousie; there’s got to be some good medical stores out there!