Manali is so popular amongst domestic travelers that it’s probably the first (okay maybe second, but only to Shimla!) destination in Himachal Pradesh that they would head to. We had heard about how, over the years, the area had become highly commercialized, losing all its charm! We were not particularly looking forward to visiting it, but since it was the first major town after leaving Leh, we decided to stay back and laze for a couple of days. In the end what was to be a borings, just an overnight halt, turned out to be a week-long, relaxing, music-filled stay that completely rejuvenated us!

Manali has tons of stay options spread over 3 distinct areas: Old Manali, New Manali and Vashisht. Friends, whom we had met at Raju’s Guesthouse (Gushaini), had suggested that we stay in Vashisht as it’s the most chilled-out amongst the three and since that’s exactly what we wanted to, we headed there directly. We dropped by Joy’s Sonam Guest House first as it was highly recommended. Unfortunately Joy didn’t have any availability for us but he called a friend, who led us to the lovely (and newly built) Acharya Guest House; we gratefully checked in!

Just as the stay options, Manali’s sight-seeing attractions are also spread around the same 3 areas and they are mainly temples. Since the Manali region is quite small, all the temples can easily be covered in a single day but when we were there it rained intermittently, making us space out our sight-seeing activities over several days! Our first visit was to Manali town’s gorgeous Hadimba temple. The auto from Vashisht dropped us off in New Manali’s market area where we had breakfast at the popular Amigo’s cafe – nice setting and good food! From there it was just a few minutes’ walk and uphill climb to the temple. 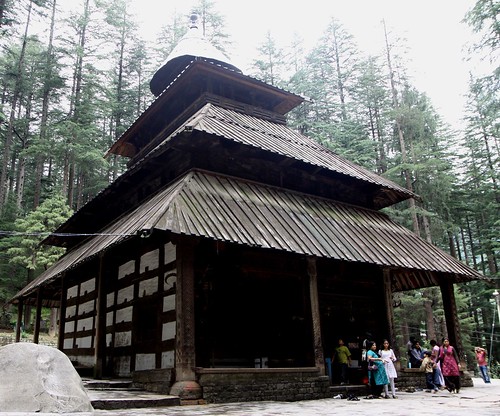 Temple is dedicated to the demon wife of Bhima, one of the 5 brave Pandavas of the epic, Mahabharata. It is a gorgeous temple built of stone and wood in typical Himachali style. It sits on a lovely stone courtyard where a couple of benches are provided for visitors to sit and gape at the temple structure. However what’s most unique about the temple is the wood carving that covers its front facade – it’s absolutely gorgeous! There were also quite a few horns and skulls of goats and ibex reminding us of the fact that the temple holds a 3-day festival annually during which animal sacrifices are carried out .

The entire temple complex is surrounded by an assortment of vendors and people trying to get us to take pictures with their Angorra rabbits or in Himachali costumes. There was also a ‘fun fair’ of sorts near the temple with rides for children and food and souvenir stalls. All of this, though fun for the visiting families, took away from the serenity and picturesque setting of the temple – it was quite sad!

Right across the street from the temple is a small museum 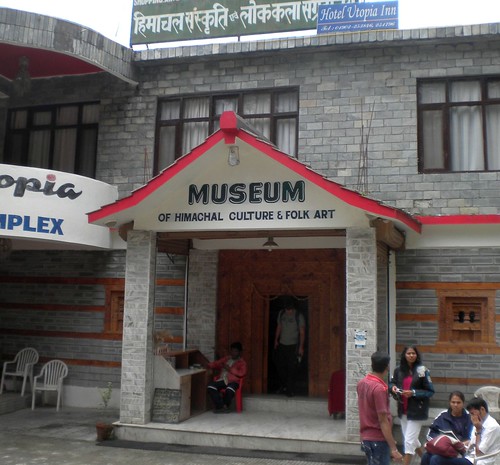 of Himachali culture and folk art. It was an interesting place with rooms dedicated to the costumes, house-ware, architecture and life-style of the Himachali folk. The most interesting exhibit was a wooden model of Himachali temples and temple-forts; it was perfectly built! There was also a picture gallery of festivals in the region and this was very informative. Overall, the museum was worth a stop-by!

In Vashisht there are 3 temples; all small with hardly any 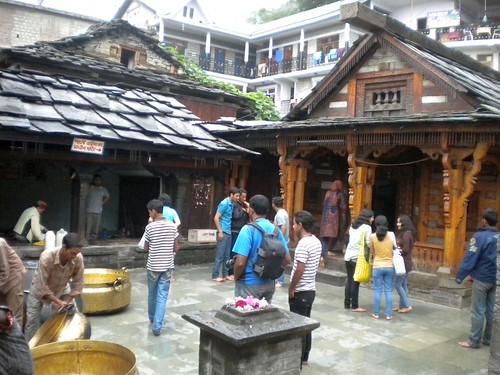 courtyard space around them. However, that didn’t take away from their beauty – they were all architecturally quite interesting! The first, simply called the Vashisht Mandir maintains 2 baths, one each for men and women, where hot water springs provide a natural source. It had a lovely courtyard where some large brass utensils caught our eye; they looked well-used but of great quality and in good condition! The temple is dedicated to 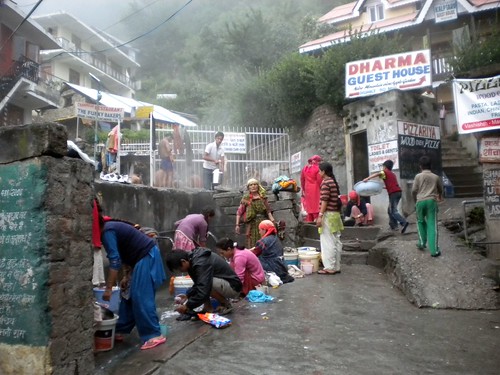 Maharishi Vashisht after whom the hillock is named. He is believed to have been the Guru of Lord Rama. Across from here is a Rama Mandir, which is built on a high stone platform. Its hall seemed to be a newer structure than the inner sanctum, which had lovely carvings on its outer walls. In the alley between the two temples is an open, wash area where women gathered to take care of their laundry using the natural hot water that sprung from the walls. A third temple dedicated to Lord Shiva faces the street. This one is small and new but again has some lovely wood work on its facade!

Although there were plenty of backpackers in Vashisht, 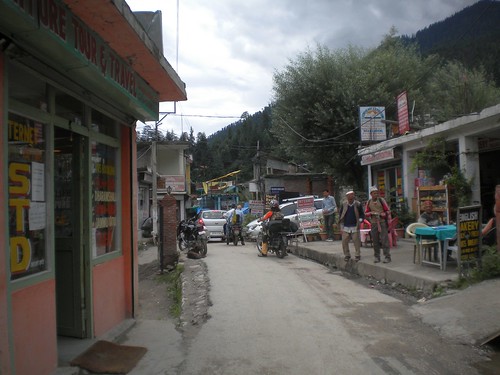 Old Manali seemed to be the place where they were in hordes. The street that runs thru the old town is fringed by cafes, restaurants, stores and travel agencies that could cater to every need of the traveler; we were amazed! At first glance the place seemed abuzz and full of life; we wished we had stayed here instead of Vashisht. But as we walked along, the novelty soon wore away and we were grateful for the relative 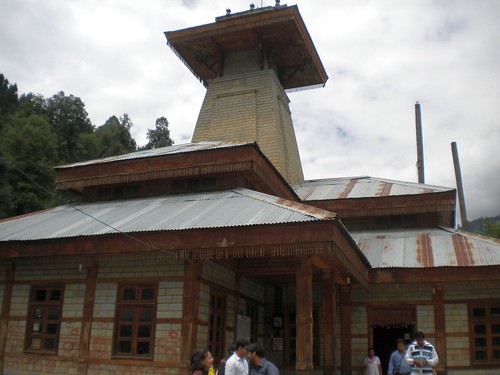 quiet that Vashisht provides; here things were a little too crowded and busy! At the northern-most tip of Old Manali sits the fabulous Manu Rishi temple. It has a 5-storey tall Pagoda-like tower, which can be seen even from Vashisht on a clear, mist-free day! The temple is dedicated to Sage Manu from whom human race is believed to have evolved. In fact, Manali is also named after him. The interiors of the temple seem to have been updated recently as it’s completely laid out in marble and granite. The lovely wood work on its main door and the pillars in the porch are absolutely stunning!

Apart from the temples and a ride up to Rohtang Pass, there’s really nothing else to ‘see’ as such in the Manali region. When the weather held up, Madhu and I did a lot of walking around. And when it didn’t we spent most of our time in the myriad coffee shops and restaurants in and around Vashisht. Sonam Guest House has a small theater room where Joy plays off-beat DVD movies on a flat-screen TV. Seating is on the floor on mats or on a few chairs that border the room. On one rainy day we caught a movie here and completely enjoyed the intimate setting! Moreover, we were able to order some black tea and French fries, which were prepared perfectly by Joy’s wife – it totally enhanced the movie experience !

Joy is an artist who first came to Manali just for a break. He soon returned to live here on a permanent basis and set up Sonam Guest House along with his wife. He has converted a couple of rooms of the guesthouse into a studio for himself where he spends hours painting. He graciously allowed us to take a peek at his work and we came away impressed! He said that he has been invited to exhibit his work in Delhi sometime in October – I’m sure that would be worth a visit! Joy seemed like an interesting person and I’m sure we would have totally enjoyed his company had we stayed at his guesthouse!

Of all the things that we did in Vashisht during our one-week stay, what we enjoyed the most was its music scene. Almost every alternate day, a restaurant in the village would invite one and all to a jam session of live music and vocals. Madhu and I didn’t know what to expect when we strolled into one of them for the first time. We were surprised to see two young lads singing and playing a guitar and flute. The hall in which they sat had just two guests apart from us, so it felt like a private music concert. The performers were really good, singing original numbers composed by them and cover numbers as well; we were super impressed! As the evening wore on, more musicians joined them: some accompanied them on the guitar, while others brought along a saxophone and drums. Slowly the whole atmosphere was filled with melodies from different kinds of instruments and vocalists of different nationalities – it was just too darn good! Except for the two young lads whom the hotel probably employs to get the jam session going, none of the other performers sounded to be professionals. Nevertheless, the music created by them was of the highest quality and truly touched our hearts. After that, Madhu and I tried to attend every jam session in Vashisht and sat past midnight listening to fellow travelers belt out their favorite numbers. These sessions were one reason why we stayed on in Vashisht for much longer than expected! 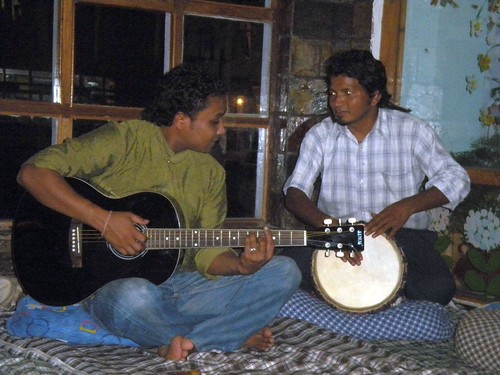 from West Bengal and excels in playing the guitar and singing along with it. His take on the popular number Sayonee by the Pakistani band, Junoon, was absolutely fantastic. He also sang a couple of numbers that were written and composed entirely by him and we thought they were excellent. His partner, Madan, is from Nepal and is a phenomenal percussionist. But he is even better with the flute on which he did a solo in one of the jam sessions – it sounded like a record-worthy rendition! These two guys made our evenings in Vashisht’s jam sessions very special. We wish them a lot of success in all their musical adventures!

Manali turned out to be the perfect end to our long tour of India’s northern states, which started at Himachal and ended right back there. We’d been on the road since May and had had the most wonderful of experiences ever! But after this one week of chilling in Manali, we felt ready to head back home for a break with family. We haven’t yet toured Himachal’s Lahaul & Spiti region but since travel there will be as hard as it was in Ladakh, we’ve decided to leave it for some other time.