The plan was to stay at Rohru for at least a couple of nights. But we didn’t like the town at all and there was, frustratingly, hardly any information about what to see or do out there. So today morning we checked out of Hotel Chanshal and headed to Narkanda, our next planned stop in HP. However, we later learnt that we could have hired a car for the day from Rohru and driven up to Chanshal Pass where grassy meadows and Himachali flowers are a sight to behold – a must-do for anyone visiting Rohru ! Oh well, some other time, I guess!

After all the excitement of ‘discovering’ the system of shared jeeps for transportation yesterday, we were quite confident of finding one to take us to Narkanda today. But when we got down to the bazaar, we couldn’t find a single jeep to take us there! Apparently, Rohru to Narkanda is not one of their regular routes. As we stood around wondering what to do next, a young chap came out of the neighboring computer repair store and after becoming apprised of our situation, proceeded to call a couple of people to help us find a private car/jeep to take us to Narkanda. It turned out that the owner of the hardware store, which is adjacent to his computer repair store, owns a jeep that is available for hire. Soon the owner of the hardware store, Mr. Keshav Sharma, joined us and offered to drop us to Narkanda for Rs.1800, which we accepted. A few minutes later his son drove up in a white, 2003-model, Bolero Camper, an SUV with a modestly sized truck-bed and 2 rows of seating in the cab. We dropped our bags in the back and climbed into the 2nd row seats. And to our utter surprise, Mr. Sharma climbed into the seat next to the driver and he was followed by the young chap from the computer repair store; the two of them had decided to make it a day of outing along with us !

The ride to Narkanda took about 2 ½ hours and was quite bumpy because of bad roads. However, our friends in the front made it quite pleasurable with their friendly chatter and warm words. They informed us about the region: its growing apple industry, the fact that Preity Zinta’s (popular Hindi movie actress) family belonged here and some of them still lived and owned apple orchards here, and more of such trivia. They even apologized for the bumpy ride saying that their SUV didn’t really have the best suspension. It was all very sweet! The route was quite scenic too! Narkanda is at a much higher elevation than Rohru, so we climbed quite a bit passing picturesque apple orchards and potato and pea farms! On the way, we stopped at a road-side water spout, which spouted clear, drinkable mountain water. The state govt has setup several of these along the roads for thirsty travelers – quite thoughtful!

Mr. Sharma and sons dropped us off at Narkanda around 1:30pm (just in time for lunch!). Madhu had called Tethys Resort’s Sanjeev Dogra in advance for a 2-nights stay at the lovely hotel. After checking in and gorging on some great food, we asked the hotel staff for recommendations on things to do in the area. The main attraction was, of course, the trek or drive to Hatu Peak, which is about 7kms away from the hotel. We decided to reserve that for tomorrow morning. For the afternoon, they recommended that we walk downhill to Daru village, which is about 5kms away, and back. This sounded perfect, so we donned our cameras and daypack and set off at about 3:30pm.

Situated on the old Hindustan-Tibet road (now NH22) and at a height of almost 9000ft, 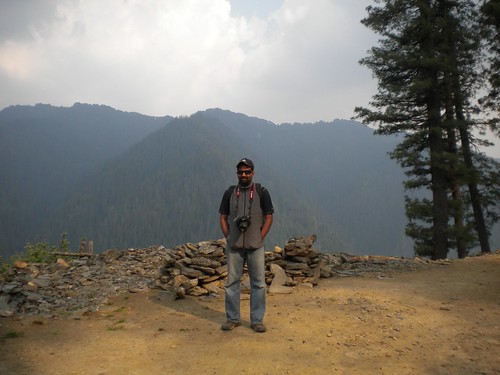 Narkanda is one of the most picturesque places we’ve been to in Himachal. Its lofty height makes the weather perfect during summers (not too hot, not too cold) and the thick Deodar forests make its slopes look amazingly green. As we walked out of Tethys Resort, we could see the small village of Daru nestled peacefully in the mountain across from us, amidst apple orchards and Deodar trees. It looked really far away, but with perfect afternoon weather, we walked on with determination.

The dirt path to Daru village, forks off from the national highway in a downward angle at the 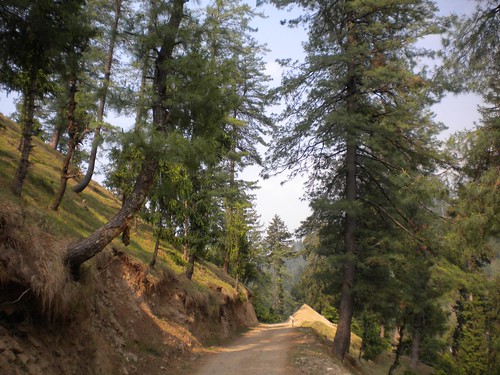 same point where a concrete path leads uphill to Hatu Peak. The turnoff for Tethys Resort is just about a yard from here – so it’s located quite strategically! We took the dirt path and found ourselves in a fantastic, shaded trail that led downwards gently. The walk to Daru village was just about 4kms and shouldn’t have taken us more than an hour, especially since it was downhill all the way. But the scenery was so beautiful that we paused several times to take pictures or simply gaze away. On the way, only a couple of people passed us on foot and vehicular traffic was almost non-existent. So we had the entire road to ourselves; we walked in complete bliss! At this pace, it took us more than 1 ½ hours to get to Daru – but we didn’t care!

Daru village is a tiny settlement with just about 15 to 20 homes, most perched precariously 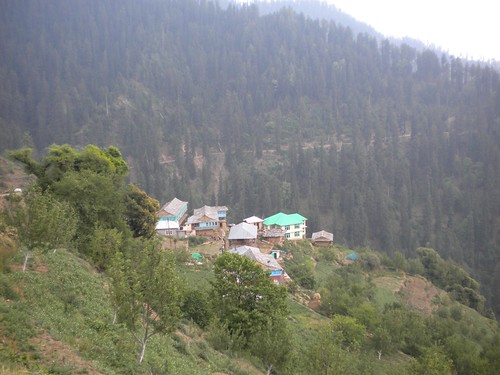 on the mountain slopes. Some of the homes are old, wood and stone structures with slate roofs, while some seem newly built with white-washed exteriors and tin roofs. As we walked to the village, we noticed a colorful structure that looked like a temple, so we decided to pay it a visit. But it was located, along with the homes, on the downward slope of the mountain and we weren’t quite sure how to get to it. Madhu noticed a man (maybe in his 40s) standing outside a home, looking curiously at us. When we asked him for directions to the temple, he told us to take a steep, downward-sloping, narrow path off the road towards the homes. We did as we were told and the path eventually led us to him. He was warm and very friendly; we immediately began chatting. His name is Joginder Dogra (belonging to the same community as the owner of Tethys Resort – Sanjeev Dogra!) and he has lived here in Daru all his life. He told us a little about the village and even walked us through narrow, stone-paved alleys to the temple, which sat in the center of a pea field.

The colorful structure we had seen from the top was actually a traditional chowka, a seating place 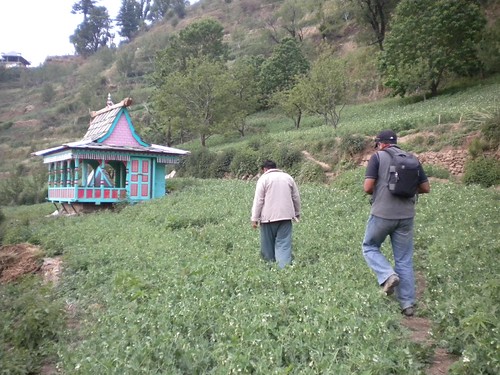 for the poojas and rituals of the village. The temple was a small, white-washed structure, next to the chowka. It had 2 small niches where crude, stone images of Goddess Durga and Lord Shiva were placed – they must have been hundreds of years old. We paid our respects, took some pictures and with Mr. Joginder leading the way, left the pea field and headed back up to the dirt path. On the way out, we noticed a few small plants of Cannabis, from which Charas (hand-made hashish) is made. Used for medicinal purposes only? Maybe !

Mr. Joginder walked with us uphill and then invited us for tea at his new home, which was being 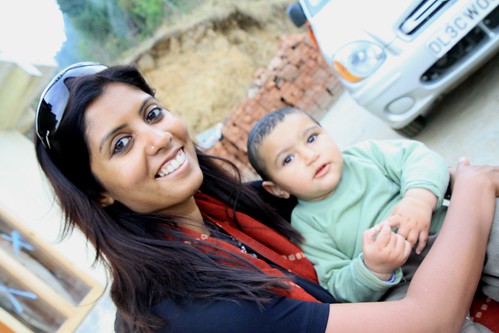 built at the corner of an L-shaped curve of the road, just a few meters away from the rest of the village. Its location gives views of the valley on 3 sides; an absolutely fantastic location! The lower floor of the house is complete and this is where the family is currently living while construction is still on, on the upper floor. His apple orchards fill the slopes below the home! We saw tiny apple buds beginning to form in them – this was our first glimpse of apples, albeit in tiny forms, in Himachal ! Mr. Joginder’s beautiful wife brought out plastic chairs and placed them in the verandah for us to sit on. She then made us some awesome Masala Chai and sat down to chat with us. I played with their 1 ½ yr old niece, Vaishnavi (lovingly called Gudiya), who was the cutest and friendliest kid ever ! I’m convinced, now more than ever, that all Himachalis are simply born friendly ! We spent about half an hour with the family and had the most wonderful time! 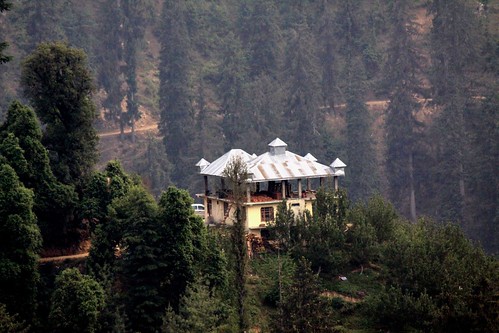 back before it got too dark. And only when we got to the resort did we realize that we had a perfect view of Mr. Joginder’s home from our room, which has a large window overlooking the valley and the mountains beyond. What a wonderful day it had been!