Just like apple farming in Thanedar, which was introduced to the area by an American, tea estates were 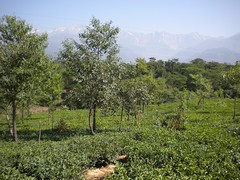 first cultivated in the Palampur region by the British, who recognized its potential back in the mid to late 19th century. Chirapunji in Assam, a northeastern state of India, receives the largest rainfall recorded in the country; Palampur is a close second. This didn’t help the locals with other types of farming but it was perfect for growing tea. So the British went about planting huge tea estates and began producing some very high quality stuff. However, a massive earthquake in 1905 destroyed everything and scared the British, who left all the estates behind and fled. The region then slowly regressed as it didn’t have any other industry to rely upon. Finally, after independence, the govt woke up to its potential and started providing the locals with incentives to revive the estates and the local economy. And it worked!

Today visitors are greeted with acres upon acres of tea estates on entering the town of Palampur from either side of NH20. We hired a taxi to take us around and give us a closer look of the place. We were first driven around the Chandpur Estate, which is one of the oldest in the area. It seemed to be quite a large property! The owners run a small guesthouse called Country Cottages where visitors can stay overnight and experience life amidst tea plantations. But as we found out, they are quite popular in this season and need to be booked in advance; we couldn’t find accommodation there! Since visitors, apart from resident guests, can’t really stroll around the property, we could do nothing more than gape at the passing scenery from our car windows.

For a closer look on how tea is actually produced from tea leaves, our driver, Sushil, took us to a small, 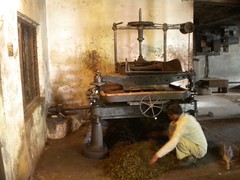 family-owned production facility, which was in the middle of town. An elderly gentleman, who was working on something, took some time out to show us around. He showed us the various, almost antique-looking (probably from the days of the British :p), machines that are used to dry the tea leaves, crush them and then finally grade or sort them based on quality. Then two women showed up with empty baskets. Their role was to fill the baskets with the final product and take them to a local wholesaler for selling. They, including the elderly gentleman, turned out to be relatives of Sushil; somehow everybody seems to be related to everybody in rural India.

Since we didn’t get to see the Chandpur tea estate properly, Sushil took us to Wah Tea Estate, which falls on 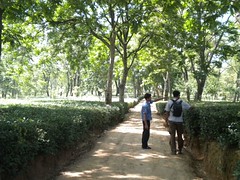 the way to Baijnath from Palampur in the village of Deogran. It’s a sprawling estate with a tea production factory in the center. Sushil parked the car by the side of the road and then we walked leisurely through the estate, feeling the tea leaves with our fingers, to the factory. There, at first, we were told that the factory was closed for the day and visitors were not allowed. However, after a few minutes, for some strange reason, the site manager had a change of heart and instructed his staff to show us around, on the condition that we don’t take pictures inside the factory. We vowed to abide.

One of the staff members opened up the locked interiors of the factory and showed us their immaculately maintained facility. They had separate halls to dry, crush and sort the tea leaves. We saw a huge tray filled with tea leaves; it was placed in a holding area where proper ventilation and fans ensure that the leaves are dried evenly and properly. The machines were similar to the ones we saw at Sushil’s relatives’ place but the ones here were bigger, newer and in better shape. They looked like they were wiped down to a shine every day! The floors were absolutely clean and spotless too; we were quite impressed! The tour ended with the opportunity to hold and smell the final products – different grades or qualities of tea. Apparently all of their produce is sent to Calcutta from where it gets distributed around the country; fascinating!

Our next stop of the day was the little village of Andretta, which is 12kms south on a road that forks off the highway to the right, further west of the Wah Tea Estate. This village has quite an interesting history! Norah Richards, an Irish playwright, came to Andretta sometime in 1930s and then stayed back building herself a nice, Kangra-style mud house. She then immersed herself in the local theatre scene inviting artists from around the country to come to Andretta and perform in a little amphitheatre that she built in her very own yard. Eventually, she got heavily involved with Punjabi theatre amateur and professionals and played a huge role in giving them the encouragement and impetus they deserved. Over time, Andretta began to be recognized as an artists’ haunt as Norah continued inviting artists from other fields as well to come over and spend some time in the picturesque village. She got interested in pottery and went on to set up a workshop, which is operational even today!

When we heard this story, Madhu and I couldn’t wait to see the village. In fact, more than the tea estates we were totally looking forward to our visit here. However, it was quite a disappointment! The village must have seen its days of glory pre-independence when Norah was around but today it seems like just about any other Himachali village. One of the artists, who moved to Andretta during Norah’s time, was Sardar Sobha Singh. We had seen some of his paintings at the Chandigarh museum and had really liked them. So we visited the museum in Andretta dedicated to him with great expectations. Unfortunately, the museum is just a small hall with some of his lesser known works; a couple of the paintings were really good no doubt, but none were of the same standard as the ones in Chandigarh.

Then we decided to visit Norah’s pottery studio, which is still active today and holds 3-month 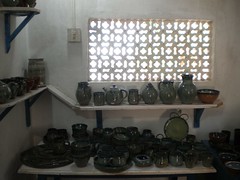 courses for students around the world. To get to it we walked about a kilometer into the village from the main chowk; it wasn’t an easy task in that blazing afternoon heat. Right by the entrance was a small shack, which appeared to be the main workshop. Many students, Indian and foreign, were working with clay and there were about 4 or 5 pottery wheels as well. Since there was no other entrance to the place, Madhu and I stood there wondering what to do next as we didn’t want to disturb the students who looked preoccupied. A couple of older men, who seemed local and could have been staff members, ignored us completely! Finally, a chirpy young Indian gal asked us what we were looking for and when we asked if we could look around, she happily waved us through. She told us that there was a showroom and a museum at the back that we could look at. The showroom was a small, 2-roomed, mud hut with many little clay pots and cups on display. Some of them had price tags as well, so I’m assuming we could have bought the stuff if we wished. But the work looked, surprisingly, a little amateurish. Later when we walked towards the museum, which was a larger 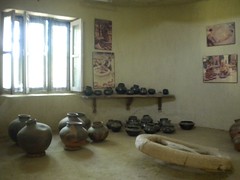 mud house, we found it padlocked. Madhu walked to one of the staff guys who was working on something and asked him if someone could open it for us. That guy did not look up and didn’t even bother answering. Madhu stood there for several seconds unsure of what to do next; nobody has ever been so rude or rude at all to us in Himachal; it was a new experience! Finally, when he saw that Madhu hadn’t moved from his spot, he called out to another guy and asked him to bring keys and open the museum for us; a total jerk!

The museum was old and in desperate need of dusting. Dust had settled in comfortably over all the pottery materials and articles on display. It was an interesting, eclectic collection but needed to be preserved and presented better. As we left the museum and studio, nobody looked at us and we felt so darn uncomfortable about having invaded their space. But then if visitors were not welcome, they need to put a sign about it at their entrance and also ask the guidebooks to not refer to them as a ‘place to visit’ in Andretta.

On our way back out to the village chowk, we visited Norah Richards’ home, which is a large < 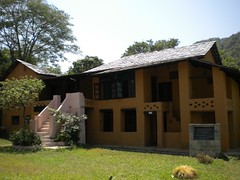 complex consisting of the amphitheatre that she had built, a grassy lawn, her actual living quarters and a new guesthouse built by the govt. The home is a simple structure made of wood and mud. The rust shade painted over the mud walls looked great with a trim of dark brown wood. It’s a double storied structure and we were able to climb up to almost every room and explore. They were all bare except for shelves built into the walls and glass lamps that hung from the ceiling. It was hard to imagine someone live such an austere life in a country not her own; artists are truly eccentric! As we left the complex and headed back to our car, we realized that Andretta may have been a glorious place to visit and mingle with artists back in the day but today, unless one is out there to learn pottery at her studio, a visit to it can definitely be skipped!

The village of Bir is known to be one of the best places in India to do paragliding and Madhu was quite keen on trying it out. We had decided that we would stay an additional day if it would be possible to try it then. But when we enquired around we learnt that the season for paragliding is in winters when the winds are up and about. So with nothing more to explore in Palampur, we plan to head to Mcleodganj tomorrow.