We woke up early today morning and armed with a bottle of water and Parathas, packed for us by the hotel’s kitchen, set out for Hatu Peak at about 7:45am. I had expected the weather to be quite cold but was pleasantly surprised by a warm and sunny morning. But I prayed that it wouldn’t get too warm as the morning wore on. Narkanda is at about 9000ft and we were to climb another 2000 to get to Hatu Peak – that would definitely not be fun if it got too hot! But I need not have worried; throughout the day, the weather was just absolutely gorgeous! It was warm but not hot and it was sunny but not harshly bright; it was a perfect day for the outdoors! 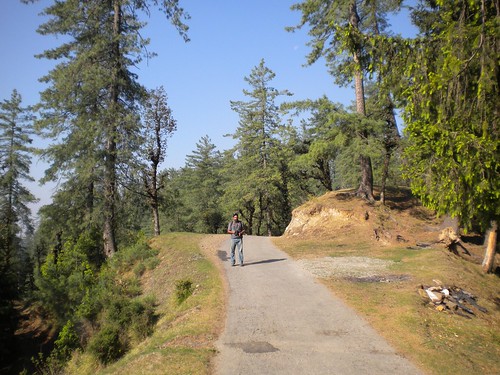 The narrow tarred road up to Hatu Peak is meant for non-commercial vehicular traffic as well. So, for a change, we didn’t have to guess the route or the distance covered; there were markers set up at every kilometer for us to time and pace ourselves. Surprisingly at 8am in the morning, we were the only ones, on foot or otherwise, on the trail. This was great as the going was really, really tough making us stop in the middle of the road every few minutes to catch our breath! In fact, the first couple of kilometers uphill was quite steep and made us wonder if we’ll really be able to make it to the top. But the trail was pretty and it kept us motivated to keep going. Kilometers 3 and 4 were relatively easy as the incline decreased and the trail took us through some beautiful grassy meadows. We passed an abandoned tea shop by a small pond of water – it was quite a picturesque setting; a steaming cup of hot tea at that point would have totally refreshed us, especially since the last 2 kilometers to the peak were steep again ! On empty stomachs and no hot tea to refresh us, Madhu and I huffed and puffed our way up and finally got to the top at about 10:30am; it had taken us 2 ½ hours to cover 6kms and gain 2000ft. 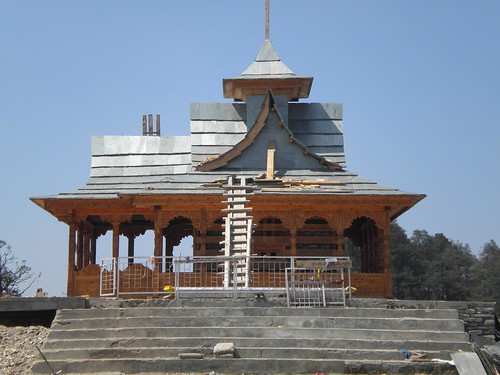 For Narkanda locals, Hatu Peak’s importance lies in the Hatu Mata temple that sits at the top. Originally it was a small non-descript structure but it was demolished 3 years ago to build a brand new one in its place. Today it is still a year away from completion. When we had heard about the project, we were saddened that the old temple was being torn down for something that would obviously not be as good. But we were so wrong! The new temple is being built in traditional architectural style with some fine wood carvings. Although work was going on in full swing, we were allowed to clamber atop its raised platform and view the temple up-close. Even half-done it was absolutely gorgeous with carvings of the highest quality; would love to see it after completion! Until then, the idol of Hatu Mata (Goddess Durga) has been placed in a temporary tin shed next to the new temple.

The road leading up to Hatu Peak passes the temple and ends at a cliff-end where there are 2 empty, cottage-like structures built on a raised platform. These belong to HP Tourism, which plans to set them up as a guesthouse and cafe someday. From here, on a clear day, one can get fantastic views of the Himalayan ranges around. Today, even though there was a slight mist in the air, we could see glimpses of the snow-capped Himalayas in the distance! What a great location for a guesthouse! We sat on park benches here and ate our breakfast of Parathas gazing out at the fantastic scenery – it was an amazing experience! 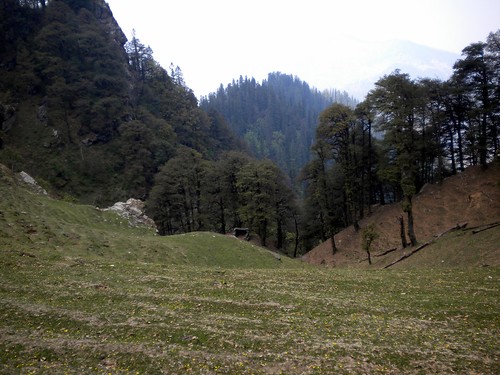 We had read that beyond Hatu Peak, along the ridge, is a large grassy meadow called Jaubagh. This, according to Tethy Resort’s Sanjeev Dogra, is the highlight of Hatu Peak and must not be missed at any cost. When we asked around, we were told to follow a dirt path which forked off into the woods from the main road. We did as told but a few meters later came upon a large, circular muddy compound, which looked like a parking lot. No visible path went beyond this point. Confused, we headed back towards the temple. When we asked a group of 3 men for directions, one of them said that there is no marked trail to the meadow. He told us to cross the parking-lot-like compound and head into the forest and keep going straight atop the ridge for about 1 ½ kms, or about 25mins, till we get to the meadow. One man, who was older than the other two, said quite pointedly that it is basically a forest walk with no visible path and that people like us (probably meaning city crowd) would never be able to get to the meadow on our own ! We were a little disappointed by this but the two younger men were more encouraging and said that as long as we stayed straight on the ridge, we wouldn’t miss it. Not wanting to quit, we decided to give it a try. And, thank God, we did! 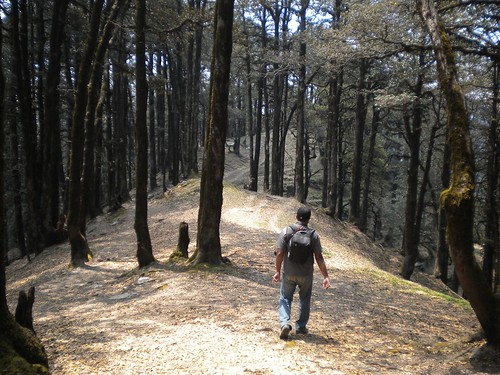 The trail through the forest is truly not marked but we could make out a narrow, lightly trodden path, which we followed diligently. We also tried to stay as straight as possible on the ridge without straying too far to the left or right. The walk took us up and down over some rocky outcrops and through a heavily forested area with the ground completely covered with dried, fallen leaves. It was so beautiful! In about 10 minutes of focused walking we came upon a smallish, green meadow with tiny, colorful flowers growing all over it. At first I wondered if this was Jaubagh but we realized that this couldn’t be; it was too close to the temple area. So we crossed it and kept walking. Within another 10 minutes, we finally chanced upon the fabulous Jaubagh! 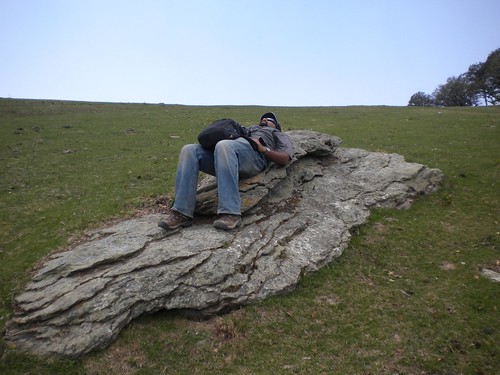 Jaubagh is a lovely, large, undulating piece of grassy land fringed with Deodar trees. It looked exactly like a location for Yash Chopra’s Hindi film songs ! Unfortunately it also seemed to be the grazing ground for cattle as there were animal droppings everywhere. We sat on some rocks for a while then walked further down the ridge’s slopes to find a clean grassy spot. There we lay down under the blue sky and rested a while. After 3 hrs of walking, those moments of peaceful rest, in that fantastic setting were pure bliss – it was truly like finding paradise at 11000ft!

The hike back up the meadow and across the forest to the temple was quite tiring. But from there to the base of the trail was a breeze as it was all downhill. We didn’t stop even once for a break, clocking between 10 to 15 minutes per kilometer. The last stretch of one kilometer – from the highway to Tethys Resort – though, completely killed me. It is slightly uphill and my tired body just about gave up. When we finally dragged ourselves to the resort and sat down for a rather late lunch, we realized that we had walked a total of 17kms today – 1km to the highway, 6kms to Hatu, 1.5kms to Jaubagh and the same all the way back! Unbelievable! But it was totally worth it and in spite of how hard the day had been, we would’ve never had it any other way!