Today morning we checked out of Giri Ganga Resort and waited outside on the porch for a Rohru-bound bus to pass by. The plan, at that time, was to stay 3 nights in Rohru and explore the surrounding Pabbar valley region. It is some 40kms NE of Khara Pathar; given that it had taken 4 hrs to cover 80kms from Shimla to Khara Pathar, we figured that this trip should at least take a couple of hours.

However, the first bus that showed up was completely packed, so we had to let it go. 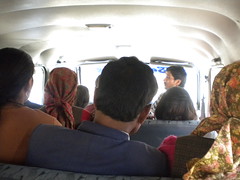 As we waited for another one, the friendly hotel manager came out to give us company. And then helped us flag down a jeep that was on its way to Rohru with about 8 passengers already seated. The driver helped us load our bags onto the roof-rack of the jeep while Madhu and I found seats on the last row. We were absolutely thrilled to find this mode of transport. It is fast, efficient and not to mention, cheap! It was like the private, shared autos and jeeps that Madhu and I had traveled on in Konkan. We never knew that a similar system existed in Himachal as well. None of the guidebooks or fellow travelers had ever mentioned it. Now we feel more confident about getting around Himachal using public transport .

The road from Khara Pathar leads east to the river Pabbar and then follows it upstream for about 15kms to the large town of Rohru and beyond. This stretch is quite scenic with the river and its rocky, sandy banks running parallel to the road; I was mesmerized! However, when we got to Rohru, all the beauty suddenly disappeared and in its place stood a congested and filthy town. When the jeep dropped us off in the bazaar, Madhu and I felt quite disoriented; this was not the Himachal we had come to love . It’s sad what unchecked development and overcrowding can do!

We checked into Hotel Chanshal (another HPTDC venture) and wondered if we should really stay for 3 nights. It certainly didn’t feel like a fun or comfortable place to stay. For the moment, we decided to go ahead and do what we had come to Rohru for – see the village of Hatkoti, which is famous for its scenic location and the Hatkeshwari temple. We had passed it on our way from Khara Pathar and it had looked quite spectacular! So after lunch, we walked back to the bazaar and found another private, shared jeep (love them!) to take us to Hatkoti.

Hatkoti is a tiny village at the beginning of the Pabbar Valley with the river flowing right by it. 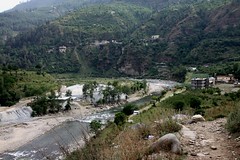 Situated at about 4500ft, the village is completely surrounded by the Dhauladhar range of mountains making its location quite idyllic. The jeep dropped us off on the state highway that runs above the village on the surrounding mountains. From here the view down to the village is quite gorgeous! We could even make out the square, walled compound of the temple. A narrow, tarred road (it was being re-tarred today) runs down from the highway to the village. Half way down this road, we spotted some steps leading further down towards the walled temple complex. We followed it and ended up entering the complex through a side entrance.

The Hatkeshwari temple complex is a mix of old and new architecture. The walled compound is 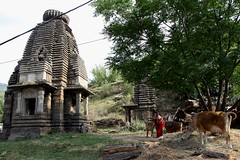 > definitely old but the stone and mosaic trim compound flooring looks quite new. The main shrine dedicated to Goddess Durga, the adjoining shrine dedicated to Lord Shiva and the 5 empty shrines called the Pandava temples are all ancient and stunningly gorgeous! The Durga temple looked quite unique with its double-storied structure. Inside, the idol of Mahishasuramardhini is quite nice too! There was also a round, raised, traditional chowka with lovely wooden pillars and ceiling – it provided a nice respite from the afternoon heat. However there are 2 new, white-washed, rectangular halls built on either side of the main entrance. They look quite incongruous to the rest of the architecture – I can’t believe they built them there .

We exited the temple complex and walked around it to see the rest of the village, which didn’t seem much. There were a few provision stores, mainly selling pooja items for the temple. Apart from that we hardly saw any traditional homes or structures. There were open fields but they all seemed to have some sort of construction work on them. In fact, the whole village looked like it was sprouting new, multi-storied structures, which are definitely not going to add beauty to the place. I have a sad feeling that soon, in a few years, Hatkoti will be as congested as Rohru .

About a kilometer beyond the village, on the way to Rohru, are the ruins of two lovely stone temples. 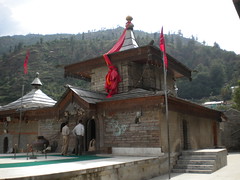 We had noticed them on our way to Rohru earlier this morning. We got to one of them via a narrow dirt track that took us past a large rocky outcrop by the river banks. The path wasn’t particularly clean or picturesque; a big project is underway on this stretch of the river with lots of trucks and men working on it. We had to pass the project’s security post on the river bank to get to the temple, which sits on a high platform accessed via some stone steps. Unfortunately, the temple is completely in ruins with grass and weeds growing in its compound. A cow and its 6-day old calf grazed happily on this patch. It looked so dilapidated that we didn’t bother going in. The other temple was across the Bhishkulti stream, which flows into the Pabbar river at this point. It would have been a pain to get to it. So we gave up, took some pictures from afar and headed back.

From a bridge over the picturesque Bhishkulti river, we flagged down a HRTC bus, which took us on a 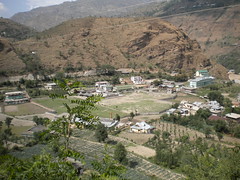 bumpy ride back to Rohru. We had read in the guidebooks about a Shikhru Devta temple, which is in the middle of Rohru bazaar. So we alighted beyond the road that leads to our hotel, right in the midst of the crazy, crowded, filthy bazaar . The roads were completely lined with stalls selling everything from vegetables to household stuff to clothing – all quite colorful! There were food stalls as well with tons of flies everywhere – not a very appetizing sight! Amidst all this chaos, with hardly enough room for people to walk in, there was an interstate bus stand as well with buses plying in and around .

At first, we asked the vendors for directions to the Shikhru Devta temple but none of them knew about it. Finally, a few locals guided us to it. After passing thru some narrow, dirty alleys we finally got to the temple only to find it closed. Apparently, it only opens early in the morning and late in the evening for pooja . A lady passing by also told me that women are not allowed inside the shrine. Disappointed, we took pictures from the outside and left.

Our day had started out quite promisingly with the jeep ride to Rohru. But since then it slowly and steadily headed downhill, ending with the disastrous walk thru Rohru’s filthy bazaar. So at this point, we don’t think we’ll stay here for 2 more nights. But not sure where to head next either¦