About 18kms northeast of Narkanda is the little village of Thanedar. Situated just off the old Hindustan-Tibet road, it is where the apple-farming revolution, if you can call it that, originated. The British had introduced cooking apples in India in the late 19th century but these were not sweet and therefore not coveted by the locals or viable for the market. Samuel Stokes, an American, who came to India in 1904 in search of spirituality stayed on to marry a local girl and made it his life’s mission to help the impoverished people of Himachal. After experimenting with other crops and failing, he decided to give apple-farming a try. He brought a sapling of the red, deliciously sweet variety of apples from Philadelphia and planted them in Thanedar. And the rest, as they say, is history ! Today, the economy of Himachal is on the up completely because of the flourishing apple industry. 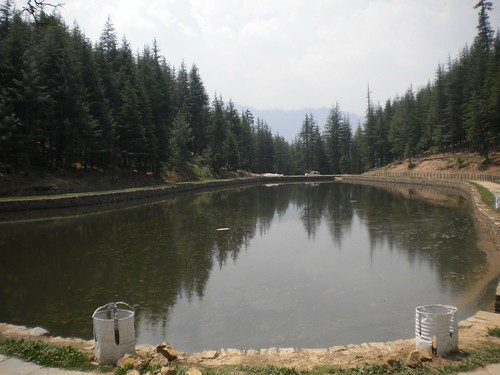 Today morning we checked out of the lovely Tethys Resort and asked for a cab to take us to Thanedar. As usual we made this request just about an hour before checking out . So we got Mahindra’s SUV-truck, Bolero Camper (similar to the one we rode on to get to Narkanda), as no cars were available; but it suited us just fine! On the way, we requested the driver to stop at the Tani Jubbar Lake, which is about 6kms before Thanedar. The guidebooks had written quite flatteringly about the lake and it was recommended by the staff at Tethys as well, so our expectations were high. Unfortunately, the lake was a little disappointing! It is an oval-shaped, shallow mass of water that is more of a pond than a lake. It is encircled by a paved pathway, beyond which are gentle slopes covered with Blue Pine and Spruce trees. It is a picturesque setting, no doubt, but Himachal has far prettier places and Tani Jubbar does not deserve a special mention. It would have been a great place to stay, though, and we did notice a resort tucked away in the woods. A temple dedicated to Naag Devta (Snake God) stands at one end but it was closed at the time we were there. So we simply walked the lake’s perimeter and then hopped back on the truck.

We got to Thanedar’s beautiful Banjara Orchard Retreat around 1pm. After checking in and gorging on simple but yummy vegetarian fare with the host, Mr. Prakash Thakur, for company, we retired to our room for a brief siesta. However, at about 3pm, the skies darkened and a terrifying thunderstorm hit the area followed by a hailstorm and lightning. It looked like it would never end. But thankfully, an hour later everything was as quiet as though nothing had ever happened! We stepped out at around 4:30pm and decided to walk to Kotgarh’s St. Mary’s Church, which was recommended both by Mr. Thakur and our guidebooks. 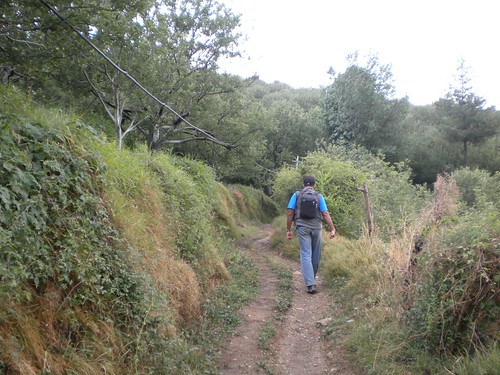 We walked about a kilometer north and downhill to Thanedar’s tiny bazaar – just a few utility stores and a couple of tea stalls. Since we were running short on supplies and since we weren’t sure what time the stores would close, we stocked up on some stuff before continuing on. At the end of the bazaar, we took a sharp left onto a road, which went further downhill and past a school, a bank and a few more stores. At the end of this street, we took a right only to find that the road had disappeared and in its place was a narrow, stone-ridden, dirt path that ran into the wooded area beyond. Since it had rained quite a bit just a few minutes ago, the path was slushy and slippery, making for a very slow progress. It took us past fruit orchards and homes. At one point it narrowed to almost a ditch-like width where we could barely put both feet down together. Here I even managed to slip and fall but, thankfully, didn’t hurt myself in any way except for some muddy palms. 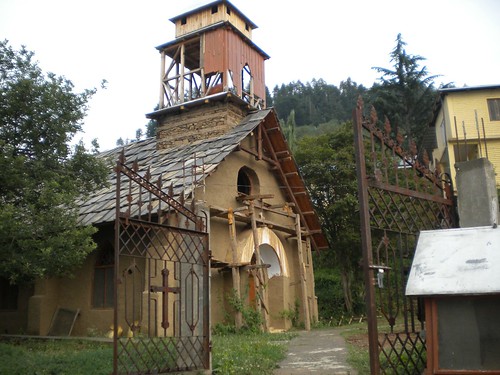 About a kilometer later, the path left the orchards and homes behind, leading us into a forest trail that ran even further downhill through Blue Pine and Deodar woods. This was the prettiest part of the trek and we spent quite a bit of time taking pictures and enjoying the scenery. Mr. Thakur had said that the walk to the church should take us about 45 minutes but it was almost 6pm when we got to Kotgarh. As soon as we entered the village, we noticed steep, stone steps that led up a slope towards the cross-topped spire that could be seen from the road. We took the steps and finally got to the pretty church that seemed to be under renovation. 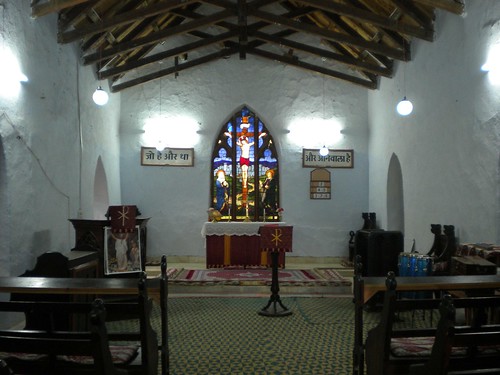 The church was consecrated in 1872 and since then has brought the Christian families of Kotgarh together every Sunday. The village and church are the setting for one of Rudyard Kipling’s short stories, called ‘Lispeth’ . It was padlocked when we got there. So as suggested by Mr. Thakur and the guidebooks, we walked to the neighboring missionary school and asked one of the kids playing in the yard if someone could let us into the church. He ran into the adjoining building and after a couple of seconds, two men emerged. One of them had the keys to the church and he motioned for us to follow him. He turned out to be the priest, although we would have never guessed as he wasn’t dressed like one; didn’t have the collar either. Inside, the church’s walls are white-washed with a large, stain-glass window on the far wall. The wooden pews, ceiling and pulpit looked ancient and gorgeous!

The priest said that the church has been under renovation for the past 3 yrs. Since it’s a heritage property, work is painfully slow. They have had to bring in experts on restoration work to ensure that the property is not damaged in any way. Moreover laborers get pulled into apple-harvesting during the months of August and September. And then, of course, the winter months don’t allow for much progress either. In spite of this, he hopes to have all the work completed by Christmas this year. When we stepped back out of the church, we noticed that its walls were made of mud. The priest confirmed this saying that it was a mud-mixed-with-straw structure atop which a layer of cow-dung is applied. Once this layer dries out, the exteriors will be white-washed and the work will be complete.

We thanked the priest for his time and help, and at around 6:30pm, started our uphill walk. I was really worried that it would get dark soon while we were still in the woods. This was a scary thought and it propelled us to forget our aching legs and walk as quickly uphill as possible. And we surprised ourselves by making it back to Banjara Retreat in just over an hour; I guess fear is a great motivator .

We spent the evening with Mr. Thakur over a glass of excellent, locally produced, Apricot wine and yummy food. We met two other couples who were also staying at the Retreat for the night. They were all very warm, friendly and intelligent people who shared our passion for travel. We had a great conversation with them and Mr. Thakur, who had amazing stories to share; it was an evening very well-spent!