Himachal’s Tirthan Valley is home to the Great Himalayan National Park (GHNP), which was high on our must-visit list. While planning our route earlier on, we thought that it would make sense to visit this part of the state whenever we get to Kullu, as it would be closer from there. From Narkanda, the plan was to continue east to the districts of Kinnaur, Lahaul and Spiti. However, we read and heard that due to unseasonal rains and snow, the mountain passes between these districts may open for vehicular traffic much later than usual, which is around mid to end of May. Not wanting to be stuck in Spiti waiting for the Kunzum La pass to open, we decided to delay our route to the east by heading north to the Tirthan Valley for a few days.

On the morning of the 9th, a Sunday, we checked out of our Narkanda hotel at 7am sharp and hitched a ride on a newspaper-wala’s SUV to a village called Sainj, which was about 30kms east. We had been assured that we would find HRTC buses from there heading north to the town of Banjar, from where Gushaini, a little village near the southern entrance to GHNP, was just about 10kms east. However, in Sainj we were told that the next direct bus to Banjar was at least a couple of hours away. Instead of waiting for it, we boarded a bus to Lohri, which was just across the Sutlej from Sainj and then took a shared jeep further north to a place called Ani. By this time, we got a little tired of hopping around – Banjar was another 55kms away and there still didn’t seem to be any immediate direct buses to there. So we gave up and hired a jeep to take us there. And thank God, we did; it took us more than 2 hours to cover the distance as the route wound up to and beyond Jalori Pass where the roads were pot-holed, steep and curvy – a bus ride would have taken forever! At Banjar’s bus stand, we had to take another cab to Gushaini as the jeep guy didn’t want to go further. The cabbie finally dropped us off near Raju’s Guesthouse just before noon; it had taken us nearly 5 hours to cover a distance of about 100kms . 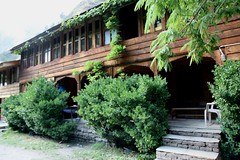 located right by the pristine, blue waters of the Tirthan River. However, it is located on the other side of the river from the road, so one has to ride in a metal basket that is pulled manually across the water; a scary but fun ride. This was a unique experience and it set the tone for the rest of our stay there. At the guesthouse, we were warmly welcomed by Mr. Raju’s son, Varun, a shy but warm individual, and their boisterous, not-so-shy dogs – Bhalu, Yati and Bulbul . I knew right then that this stay is going to be a special one and I was not wrong!

After lunch, we decided to head out to explore the area. We asked Varun for directions to Bandal village, 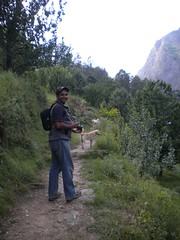 which we had heard was within walking distance and housed 2 pretty temples that were worth visiting. Varun asked us to walk east through the property and then simply follow the dogs who would lead us there. We were a little amused and not quite convinced that the dogs would actually do this, but to our amazement, just as we started walking, Yati and Bulbul ran ahead of us and led the way!

Bandal village is about an hour’s climb up an adjoining mountain. The trail took us past Raju’s property, through more orchards and homes and then through a forest area with wonderful views of the Tirthan river and valley. It’s an uphill climb but relatively easy. At one point we saw the tower of the temple above us but the trail seemed to lead us away from it, making us wonder if we were on the right path. The dogs looked a little confused and hesitant too. So we asked a couple of women who were squatting by the side of the road, apparently taking a break, for directions to the village. They couldn’t quite speak Hindi but managed to tell us to get off the dirt road and take a narrow, steep path uphill cutting across an orchard to the village that sat at the top. We did as told and got to the village within a few minutes with the dogs faithfully at our heels.

At the village, we saw the tall, colorful temple dedicated to Goddess Durga, clamped in between two traditional homes. 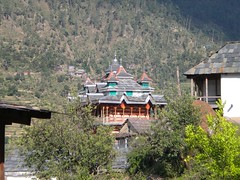 A large, open courtyard before them, overlooked the valley and had young kids playing cricket. When Madhu took the stairs on to the first floor of the temple, the dogs followed him diligently. He tried to shoo them away, but the friendly villagers who were watching us curiously, said that it was okay – dogs are only not allowed into the inner sanctum where the Devi’s idol is placed and the door to it was closed. So the dogs happily did the parikrama of the temple along with Madhu.

Some concrete steps by the side of the temple took us down to yet another temple, which was probably newer 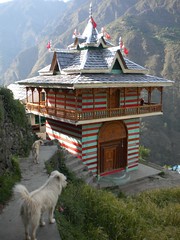 than the one before. This had a nicer location and had a fantastically carved wooden door. Funnily, right across from the temple was a small patch of land, which was completely planted with Cannabis plants); helps devotion I guess LOL. We took pictures and then sat around for a few minutes. The dogs took our cue and settled down for some rest as well. I was amazed at how faithfully they were following us around, especially since we were total strangers to them. I later learnt that this is almost like a daily routine for them, following or leading Raju’s guests around Gushaini. When there are no guests to go walking with, they actually sulk and whine.

Tonight is our 3rd night at Raju’s Guesthouse. We had intended on staying only 2 but haven’t 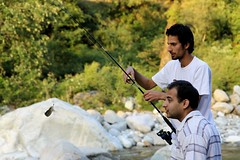 been able to peel ourselves away. This place has completely bowled us over with its laid-back, super-cozy atmosphere. Yesterday, we did absolutely nothing but laze, read and chat with the other guests around the bonfire, which Varun lights every evening in the courtyard or in the library’s fireplace. In the evening, Varun had led the boys out on a brief fishing trip to the river, access to which is right behind the guest-house, down a few steps. The dogs and I lazed on the rocks while watching the guys take turns on the fishing rod. The whole day went by in a state of pure, relaxed bliss!

Today, though, we had to get out. To explore GHNP, we’ve decided to trek and camp within it for 4 nights, starting tomorrow. For this, we need to get a permit from GHNP’s tourist office, which is in the neighboring village of Sai Ropa. The permit costs Rs. 50 per person per night within the park. So Rs. 400 and a permit later, we headed to Banjar, which is the largest village in the valley. Here we ate a quick lunch of Rajma Chawal at a local Dhaba and then hired a cab to take us to the temple of Shringa Rishi, which sits in the hills above Banjar. We could have trekked to it as well but considering that we would be trekking for the next 5 days in GHNP, we decided to take it easy today.

About 20minutes later, the cab dropped us off at the base of some stairs, from where the temple was another 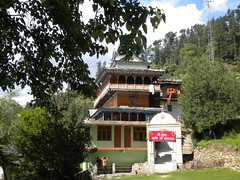 15 minutes of steep climb away. It turned out to be a pretty, 3-tiered structure in traditional Himachali colors and architecture. A large grassy lawn in the front, encircled by thick forests, gave the temple a picturesque setting. We entered through a side entrance and then climbed on wooden ladders to get to the 2nd floor where the inner sanctum was housed. This was the first time we were able to see the inside of a Himachali temple. Unlike the temples in the plains, the ones here open only once in the morning and then in the evening for daily poojas. So we’ve invariably found them closed whenever we visit. Today, though, was our lucky day, as the temple priest was on-site and he kindly opened up the interiors for us. We were able to walk around the pillared porch of the floor, which is used for parikrama and then peek into the inner sanctum as well. There were crude stuccoes of Lord Vishnu’s Dashavataram (10 avatars), which were quite interesting. Then in typical Himachali style of hospitality, the priest invited us to stay for tea. We politely declined and turned to leave as he locked up the inner sanctum behind us. 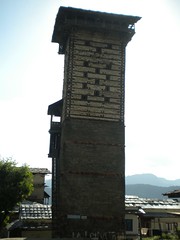 About half an hour later, we got to the beautiful, remote village of Chehni. Here we cut across lovely yellow and green fields and stone-paved alleys to get to the reason why we were at the village – the Chehni Tower. This nine-storied structure of wood and stone is actually a Bhagwati temple. It towers over the village and is known to have acted as a fortress back in the day, owing to its fantastic vantage point. A large log of Cedar wood, carved with roughly shaped steps leans against the tower and is used as a ladder to climb to the 5th storey, from where internal stairs connect the rest of the floors. Unfortunately, we weren’t able to see the interiors as visitors are no longer allowed to climb the Cedar log due to safety issues. I thought this was wise ‘coz the climb looked quite risky and a fall from the 5th storey would definitely be fatal! Another, shorter temple, dedicated to Lord Krishna was close by but, sadly, it looked to be in ruins. We sat on a low stone platform for a few minutes before heading back down past the Shringa Rishi temple down to where our cab was waiting to take us back to Gushaini.

In the evening Varun prepared our tent while his mom, Lata aunty, worked on hiring a couple of porters for our trip into GHNP tomorrow. This is the first time in my life that I will be camping outdoors in true rustic fashion, so I’m both excited and apprehensive about the trip. After the luxurious, lazing, feasting days at Raju’s Guesthouse, it’s going to be a little hard for me to suddenly have to rough it out with long, hard walks, sleeping bags and camp food. Hopefully, the beauty of the Himalayan forests will keep me motivated; fingers crossed!