Yesterday we had managed to see most of Shimla’s city center. The guidebooks had listed a few walks outside the center as scenic and worth checking out. So today we headed back there again taking a bus from Shogi bazaar. Even though we were, at first, unsure of how it would be to do day-trips to Shimla, we now really like it. It’s easy enough to get there and back, and a lot cheaper too!

Our guidebooks haven’t been very helpful in figuring out walks in the Himachal area. Just like Kasaulioupl, the Shimla walks have also been vaguely mentioned without marking the exact location, length and/or the time/effort required. However, encouraged by the lovely scenery around, Madhu and I were determined to somehow figure them out and give them a try. We decided to do the walk to a picnic spot called The Glen, another to Chadwick Falls and then finally one to an area called the Annandale meadows. The bus dropped us off at the foot of the Boileauganj area, which is SW of the Indian Institute of Advanced Studies (IIAS) that we had visited yesterday. At that time we had seen some signs pointing to The Glen and Chadwick Falls, so we figured this would be the best place to start.

We walked about 2kms uphill to emerge at the southern side of the IIAS. Near its entrance 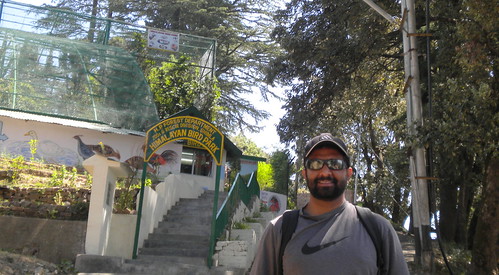 we asked a lady running a fruit stand for directions to the Chadwick Falls. She flatly told us that there’s no point going there as the area is absolutely dry with no water . When we asked about The Glen, a couple of men sitting near her stall told us to walk a kilometer east towards the city center and then take a left onto a side path near the Oberoi Cecil hotel. We took their advice, let go of the Chadwick Falls walk and started heading east. But we noticed a Bird Zoo across the street from the gates of the IIAS. A hoarding mentioned that it houses injured birds and rehabilitates them. Out of curiosity we decided to check it out. As we bought tickets, we asked the man at the counter if they get a lot of visitors. He sighed and said that they don’t because the taxi operators unfairly ‘misguide’ the visitors and never bring them here. I wondered why they would do this but didn’t question the man further. I’m glad I didn’t bother. Once inside, we figured exactly why no visitors come by there are hardly any birds there! All we saw were hens and roosters! This place has no right to be called a zoo – a more suitable name would be Rooster Park ! It’s a really small place too; we were in and out in less than 5 minutes! Back outside, when Madhu expressed his disappointment at the lack of birds, the caretaker said that because of the renovation work (we had seen a couple of men doing some woodwork) some birds had to be kept away. Well, in that case they should ideally close shop until renovation is complete and a zoo of some sort can be put on display! 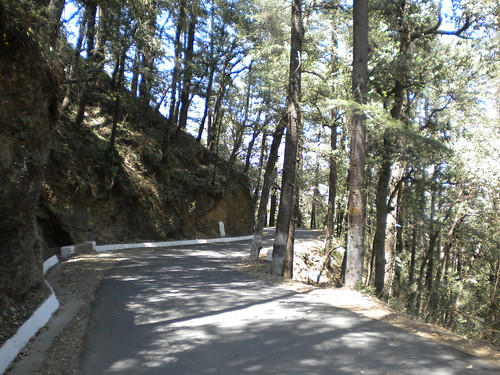 the street, by its parking lot. This path was shaded and not busy; I was immediately relieved to get out of the sun into this quieter area. Our pace automatically slowed and we relaxed considerably as the path led downhill through the woods. A few minutes later the path widened out into a street that runs north-south connecting Mall Road and Circular Road. We eventually hit Circular Road and continued walking north until we came upon a turnoff with a sign marking The Glen to be 1.5kms to the left via a dirt path. Up until this point we had probably walked at least 3kms on concrete roads and all downhill. The dirt path to the left seemed to be going further downhill. This worried me a little ‘coz this only meant that we were going to have a 4.5kms uphill walk later. But we continued on as the scenery got better once we left the main road. The path led us through the side of a cliff, which reminded me of the Gilbert Trail in Kasauli, except that while that was a flat trail, this one seemed to go downhill at a steep angle . 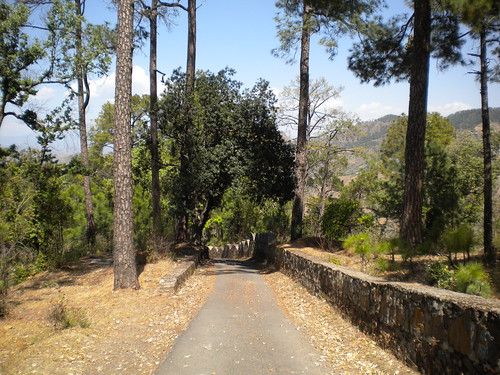 way back without dying of fatigue. We hadn’t had any lunch and had just about half a bottle of water on us. Moreover, the guidebooks hadn’t really given me an idea if The Glen was really going to be worth all this effort; especially since there was no one else on the trail but us. I found a place to sit nearby and perched myself there to think and reconsider our options. Just then an elderly couple walked down the trail heading towards us. They were quite friendly and we soon got into a conversation. They were Canadians, on a 4-month trip around India! We were impressed! They were surprised that there was nobody on this gorgeous trail while something similar in Northern America would have invited hoards of hikers from all over. They had trekked in Nepal as well and generally love walking. The Shimla tourist information center had given them a map (much nicer one than the guidebook ones we had), which marked the trail clearly and also showed it to go on uphill towards the Chadwick Falls area before emerging back out onto the main road; the whole trek was to take about 4hrs. I was amazed at their energy and enthusiasm! After they left to continue on the trail, I felt a little ashamed at wanting to chicken out of the trek . So, summoning all my courage, we continued downhill as well, a few minutes behind the Canadian couple. 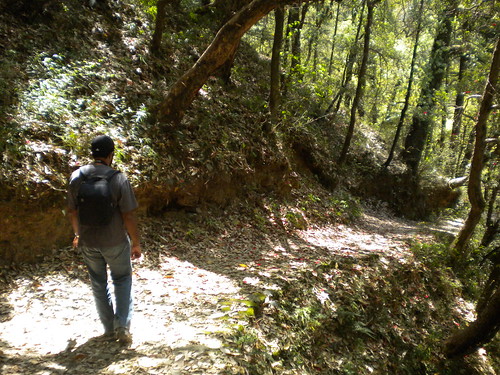 with a slim stream of water flowing next to it. I’m sure the stream must get fuller after the rains, making the place prettier, if that’s possible. Since we didn’t have anything to picnic with we decided to continue on the trail towards Chadwick Falls. However, from here the trail suddenly shriveled down to a narrow, barely visible, path through the forest. This made me nervous again (I worry easily, I guess) as the thought of being lost in these woods without food or water wasn’t fun. But more than that I worried about being stuck here until dark – Lord knows what creatures inhabited this place ! But Madhu didn’t seem too worried and managed to keep track of the path as it wound up on the adjoining hill. His theory was that as long we were heading uphill we would be okay as it has got to lead up to one of Shimla’s roads above; after all, the city is spread over 7 adjoining hills!

The trail now got tiring and very narrow at places but at all times, it was absolutely gorgeous! 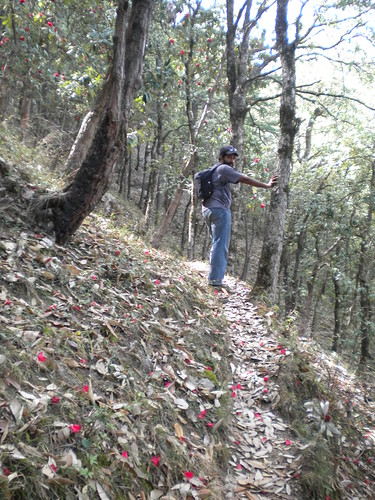 We were surrounded by Deodar trees and Rhododendron flowers. The path was strewn with dried leaves and fallen flowers. We were shaded from the heat of the sun and a cool breeze kept us going. Looking back now, I think this was really one of the finest nature walks we’ve ever been on.

Just like Madhu anticipated, the trail finally led us out onto a concrete road but not without throwing in some very steep steps towards the end. Somewhere along the way we must have passed Chadwick Falls as well but saw no sign of it. In spite of the tiring, draining climb, in spite of having no idea where we were exactly and in spite of the uphill sloping road ahead of us, I was absolutely glad to be back in civilization ! We sat by the roadside, resting awhile and then set off again. After about 3kms, asking a couple of people for directions, we emerged at the northern end of the IIAS, right where the fruit vendor stood with her stall. She gave me a short wave and smile as we passed her; she must have wondered why we had bothered going to Chadwick Falls after all !

After a late lunch (it was past 3:30pm when we stopped to eat) and some more walking (this time downhill to the bus station), we boarded a Shogi-bound bus and got to our hotel around 6pm. Obviously, we had skipped Annandale meadows from our agenda for today; just didn’t have the energy for another 8km walk (round-trip).

It had been a long and tiring day but we were extremely proud of our walking skills especially since we had none of it when we started traveling a few months back. Moreover, today my knee did not hurt as it usually does after a strenuous climb; will never forget the pain I experienced while descending the Shatrunjaya Hill in Palitana, Gujarat! I guess my legs are slowly getting better at this. Hopefully, someday they’ll get good enough to attempt the multiple-day, high altitude treks along the Himalayan ranges. Too hopeful? Well, there’s no harm in dreaming.