Tired after yesterday’s long walks around town, we woke up a little late this morning and set out for another day of touring; it was almost 11am by then. The plan was to visit the neighboring village of Naldehra, which is just 8kms north of Mashobra. Our hotel staff assured us that we could get a bus from right in front of the hotel and they were absolutely right! We stood outside for about 5 minutes and were able to flag down a north-bound bus (not sure what its destination was!) to drop us off at Naldehra.

Naldehra is mainly known for its 18-hole golf course built by Lord Curzon during the British era in India. It’s considered to be one of India’s oldest golf courses. And at 6706ft, it is also said to be the world’s highest ! Our bus dropped us off at the entrance of the park atop which the golf course sits. Just like at Kufri, there were many horses available for the ride up but today we decided to do what we have been doing best in Himachal: walk.

As we bought our entry tickets and started trudging up the horse trail, a young man 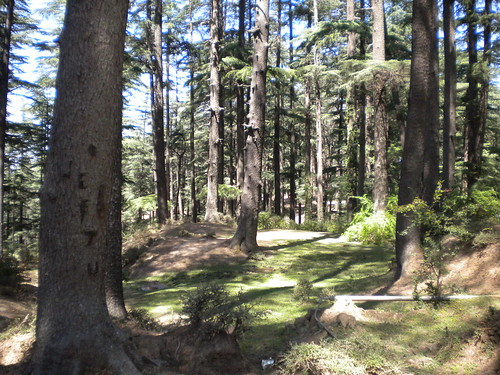 offered to guide us to the top, showing us important points along the way, for Rs.100. This sounded reasonable enough, so we hired him. He took us along the trail, pointing out the HPTDC hotel that was just by the road near the entrance. He also pointed out the snow-capped Himalayan peaks in the far distance – I was really excited at seeing them; would have never spotted them on my own as they almost looked like white clouds in the distance. Later, he took us off the horse trail and into the lovely cedar woods; it was a shortcut up the hill to the golf course. We passed a lone, beautiful horse peacefully chomping on the grass; must have a good life!

When we got back on the horse trail a few minutes later, our guide pointed to some wooden cottages and informed us that a popular Hindi movie of the 1980s, called Kudrat (starring Rajesh Khanna) was filmed here. I have watched this movie for sure but don’t remember the story; it had something to do with rebirth ! He rattled off the names of a couple other Hindi movies as well but I couldn’t identify them. I guess these movies were from the days before Yash Chopra decided to descend on Switzerland .

A few yards from here, was a large clearing where some food and handicraft stalls were setup. This area is known as the ‘Picnic spot’. Horses that bring patrons from the entrance, drop them off here for a few minutes before continuing on to the golf course. Since Madhu and I didn’t need a break after the uphill climb (it wasn’t strenuous at all), we walked towards the golf course, which was just a little downhill from the picnic spot.

The world’s highest golf course wasn’t as green as I had imagined it to be. In fact, only patches 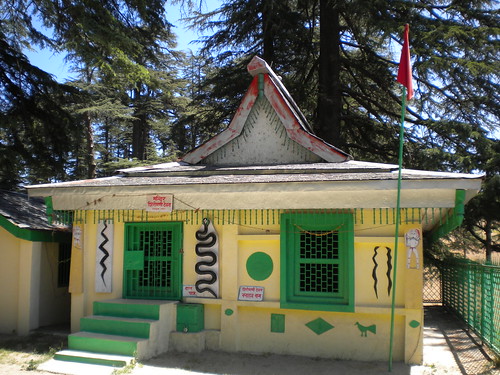 of it were green while the rest had dried out to an even yellowish-brown tone. It was fenced in completely but a narrow gate allowed us to enter the vast expanse to visit the Mahunag temple, which sits pretty in its midst. It is said that this temple, dedicated to the snake God, is from where the village gets its name Nag (snake) + Dehra (abode). The temple is simple and traditional in structure. It’s opened only in the mornings for pooja – for the rest of the day it is kept locked. I peered in thru the glass windows and found the inner hall to be quite unlike the usual Hindu temples. It had many small, painted figurines, probably made of clay as well as some pooja items like pots, diyas, etc. At the center of the back wall, was a small niche with some more figurines; there wasn’t really a shrine or idol like we are used to seeing in temples – it was quite interesting! 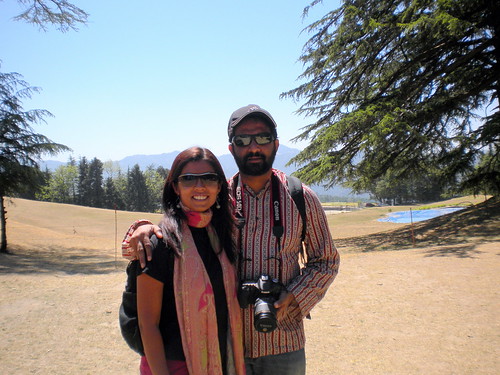 ure of us . With the tour complete, we paid him his due and let him go. We then walked uphill for a while till the trail got a little boring and we decided to turn back; I guess, with no real destination or purpose, we couldn’t find enough motivation to continue the climb uphill.

Later we retraced our steps back to the picnic spot and took a break near one of the stalls for a soft drink and ‘Fruit Chaat’. This was the first time we were sampling this – my sister-in-law who spent a lot of her growing years in North India had told me about it: the seasonal fruits are chopped up to bite size and liberally sprinkled with Chaat Masala, which the North Indians absolutely love. The sweetness of the fruits and the tanginess of the masala, give the mixture a unique taste and it’s quite interesting; not sure if I loved it, though.

While descending down the hill, we took the same path that the guide had brought us up on, although, I’m quite sure that I would have gotten completely lost if I had been on my own . I’m quite good with maps and driving directions and stuff (at least I believe so), but, for some reason, when I’m on my feet, I tend to get disoriented easily . Even in Rivermark, Santa Clara where we lived for 6 years, I would feel lost at times when we walked Shayna around in the evenings. Considering that it was a relatively small community, that’s quite shameful ! Here too, Madhu confidently walked ahead of me while I kept doubting whether he was leading us in the right direction or not! Oh well, nobody is perfect, right?  LOL.

After lunch at the HPTDC hotel’s restaurant, we checked our guidebook to see if there was anything 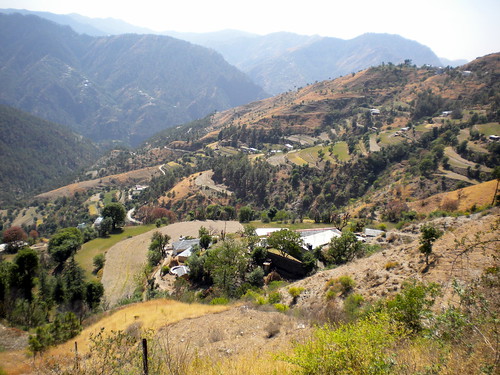 else to do in Naldehra. It listed a tiny settlement called Kogi, which, supposedly, still bears the traditional Himachal village atmosphere. It is just about 2kms from Naldehra; the locals pointed out to an unfinished road that sloped downhill to the village. We decided to brave the heat and walk the distance. The green valley before us egged us on. But the downhill walk, just as the locals had warned us, turned out to be quite tiring . The sun was in our face throughout and the newly constructed, unfinished road provided no shade whatsoever! Thank God that it was just 2kms – by the time we reached the village, I vowed to myself that, on our return, we would definitely take a bus back no matter what !

Kogi is definitely the tiniest village we’ve been to. There were just a few traditionally constructed, 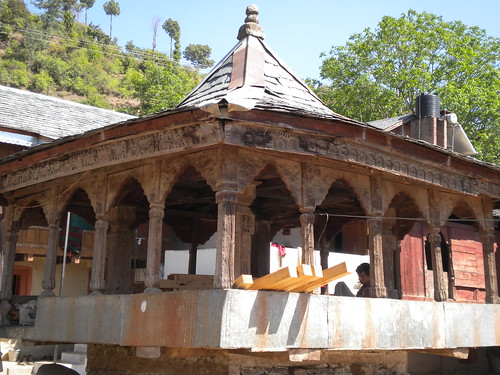 wooden homes, a chowka (seat of the village elders) and a temple. Stone pathways wound thru these structures and led us to its center where the chowka and temple were located. The whole place looked just like the remote villages of Kashmir, depicted in Hindi movies . The chowka is nothing more than a wooden platform, which was raised about 3ft above the ground, with carved, wooden pillars that support a conical roof. The pillars and the supporting brackets were absolutely gorgeous with a lot of carvings – they were completely made of Cedar wood. A man sat amidst the pillars with some unfinished woodwork lying around him. He had been commissioned to redo the wooden pillars and fix them up as many of them seemed to be in need of repair. I was a little saddened by this – such structures need to be restored carefully and not patched together by the local carpenter. But I guess that’s not always possible. There must be thousands of such villages in India with invaluable heritage structures that nobody knows about; it would be impossible for the govt to bring them all under its care and maintenance!

A few feet further from the chowka is the unusually constructed temple, again dedicated to the Snake God. As we walked up to it, a stern-looking dog suddenly showed up barking ferociously at us. He clearly recognized us to be strangers and wanted us out of there. Not wanting to aggrieve him further, we started backing away to the chowka – this would be the second time that dogs had chased us out of a place . But just then a young man stepped out of a neighboring home, shushed the dog firmly and warmly looked at us, indicating that we could now safely move forward. A couple of women came out of their homes as well and sat on the front porch looking at us curiously. When I smiled at them, they smiled right back! Unlike most women in remote parts of our country, Himachali women are not shy of strange men or people – they may not initiate a conversation like the fantastic fisherwomen of Konkan, but they are definitely warm, happy-to-see-you women!

While temples in Mashobra, Kufri and Fagu villages were all dedicated to Kali and/or Shiva, here in Naldehra and Kogi, Naag Devta (Snake God) seems to be the predominant deity. Kogi’s temple is unlike anything I’ve seen before. It is a tall wooden structure – it has a rectangular wooden base about 12ft high, topped by a tree-house-like cabin with a conical roof. Except for the entrance door, there didn’t seem to be any other openings or windows into the structure. Horizontal wooden slats with paintings and carvings cover the base completely making it look quite colorful. The theme of snakes can be seen throughout the temple with its zigzag body represented in all the carvings. It was a very interesting sight. Unfortunately, the temple is opened only during pooja days, which is based on the Hindu calendar, so we couldn’t take a peek inside.

With nothing else to see or do in the village we decided to head back. But it was about 2:30pm and the heat was terrible. I was absolutely sure that I wasn’t walking back, especially as it would be an uphill climb all the way to Naldehra. When we asked the villagers about the bus that was scheduled to pass by in the afternoon on its way to Shimla, we were told that it would stop at Kogi sometime between 3:30pm and 4pm. We had a whole hour to kill! There was no place to sit near the road where the bus would stop, so we walked back to the village and after seeking permission from the carpenter, hoisted our butts onto the chowka. We sat there under its shade enjoying the warm breeze and the wonderful scent of Cedar all around us! It was such a peaceful setting! At 3:30pm we trudged back to the road and waited patiently for the bus, which seemed to operate on mountain time – it showed up at around 4:15pm .

Although Naldehra was not terribly exciting, our brief visit to Kogi village had more than made up for it¦

6 Responses to Visit to the world’s highest golf course!