Bandipur, which was once the hunting ground of 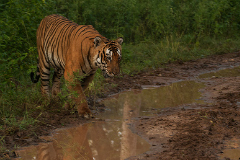 the Kings of Mysore, is one of India’s oldest National Parks. Spread over an area of 890 square kilometers, it was declared a reserve forest in 1931. In 1973, it was chosen as a site for the Project Tiger initiative and became a Tiger Reserve, and finally, in 1974, it was given the status of a National Park.

For tourists, the lush greenery of the forests presents the perfect backdrop for relaxing at one of the resorts or camps in the area. In addition, it provides the chance to see some of the exotic bird and animal species that inhabit the forests.

Although Bandipur is located in Chamrajanagar 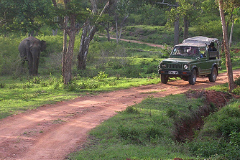 District, it adjoins the Nilgiri hills of the Western Ghats and is part of the Nilgiris Biosphere. With three rivers – Kabini, Moyar and Nugu – running through the reserve, the area has lush greenery and a mix of evergreen and deciduous forests that make it home to several exotic plant and animal species.

Besides tiger, the other animals that inhabit the forests include elephants, spotted deer, wild dog, 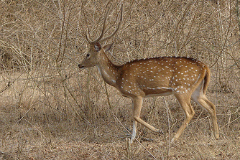 giant squirrel, barking deer, wild boar, langur and a few endangered species such as the sloth bear, mouse deer and panther, among others.

With its location 80 kilometers from Mysore, 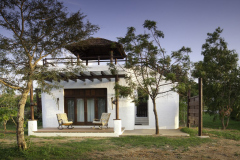 Bandipur is a popular day trip for tourists from the city. However, it is ideally experienced by staying at one of the wildlife resorts located just around the reserve as the early morning and late evening jungle safaris and treks are the best way to spot the wildlife. Entry to the national park requires special permits, which are issued at the Forest Department Office located at the entrance to the park. The forest 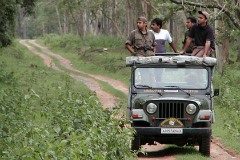 officials also conduct treks through the reserve forests. Most resorts arrange these activities on request.

Besides this, around 15 kilometers from Bandipur, is Himavad Gopalaswamy Betta, the highest peak in the district. A climb up to the peak is rewarded by the lovely views of the surrounding greenery and the possibility of encounters with herds of elephants that inhabit the hill.

The summer months from March to May can get 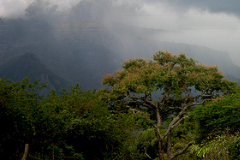 unbearably hot with temperatures ranging between 22 °C and 40 °C. However, for tourists who are willing to brave the heat, this is also a good time to spot animals as they gather at the water sources, but sometimes, the scarcity of water results in animals migrating during the season to some of the other neighboring reserves such as Mudumalai, Nagarhole or Wayanad.

The winter months from November to February have pleasant temperatures ranging from 30 °C to 11 °C. It’s the best time to visit as the forests are lush after the monsoon. The monsoon months should be avoided as heavy rains make it impossible for the safaris or treks.

With its abundant wildlife, although only a lucky few get to sight tiger, Bandipur will not disappoint as most tourists get to see at least some of the other species in the forests such as the langur, deer and elephants besides birds. Its location close to Mysore and Ooty in the Nilgiris makes it ideal or a one or two day stopover to relax and catch a breath, especially for those who appreciate nature at its best.

One Response to Bandipur National Park