Just as we were about to get templed-out, Karnataka surprised us with Bijapur a small town with a rich muslim heritage! It was such a welcome change from all the South-Indian temple architecture that we’d seen thus far! However, since it’s not big on the tourist circuit, we couldn’t find good bus connections to it from Badami – only the ordinary State Transport buses were available and that too only a couple of times a day, unless we changed buses at Bagalkote. In the end, we hired a taxi for a drop off.

Along the way, we crossed the Krishna River, which originates in the hills of Mahabaleshwar and flows east right through Maharashtra, Karnataka and Andhra Pradesh, before ending in the Bay of Bengal. Because of the excessive and unseasonal rains this year, the river has flooded some villages in the Bijapur district. As we crossed the river over a 4km long bridge, we saw submerged fields, trees and even a temple – it was quite a sad sight!

Known as Vijayapura during the reign of the Chalukyans, Bijapur got its current name from the Bahamani Sultanate who took over in the 14th century. It was ruled by the Adil Shahi dynasty from late 15th century to 17th century AD. During this time, beautiful mosques, forts, palaces and mausoleums were built around the city and these are its star attractions. A majority of these are in good shape today; however, some have been usurped by the growing population and their dwelling needs.

Bijapur’s must-see places are the lovely Gol Gumbaz and the fabulous Ibrahim Rauza. We started our tour by visiting these two and the city’s Jama Masjid.

Built in 1659 as the mausoleum of Mohammed Adil Shah, one 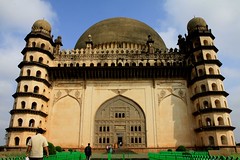 of the rulers of Bijapur, the Gol Gumbaz is a structure of extraordinary elegance! It has a square central hall, with tall, seven-storied minarets at each corner and a large dome at the top. In fact, this dome, at 142ft in diameter, is considered to be one of the largest domes in the world! The tombs of Mohammed Adil Shah and his relatives are placed in the center of the hall, atop a raised platform. To the left of the platform is a raised, prayer hall that has been built into the wall.

The highlight of Gol Gumbaz, though, is the so-called ‘Whispering Gallery‘ that runs along the inner wall of the large dome. To get to it, we climbed one of the minaret’s seven stories and came to an open terrace atop the square structure. From here, we had excellent views of the city of Bijapur. Small doorways built into the wall of the dome led us to the circular gallery within. Here Madhu and I could speak to each other by sitting diagonally across the gallery and whispering into the walls – the acoustics were simply astounding and lots of fun !

Upon entering the gates of the Gol Gumbaz complex, the first structure before us was the Nagar Khana (ceremonial entrance), also built by the Adil Shahis. It’s a 2-storied stone structure that has now been converted into a museum by the ASI. It is quite an interesting museum with fabulous artifacts from around the region. Our favorites were some slabs from the 16th century that had pretty, Persian inscriptions on them.

About a kilometer southwest of Gol Gumbaz, is the city’s first and largest mosque, the Jama Masjid. Although, architecturally quite simple with white-washed halls and arched 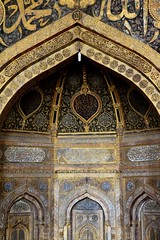 ceilings, the mosque’s most important feature is the lovely, central Mihrab, which has inscriptions in gold. It is out of bounds for visitors to avoid further damage but we could view it from a distance of about 10ft. The prayer hall can accommodate more than 2000 people at a time and is fronted by an enclosed courtyard. The entire complex covers an area of over 10,000sq.m. It is believed that the mosque houses a copy of the Holy Quran written in gold.

From the mosque, we took an auto to the gorgeous Ibrahim Rauza, which sits beyond the western walls of the fortified city. It is the tomb of Ibrahim Adil Shah, the 5th king of the dynasty. The complex contains two, almost identical structures where the one to the left contains the tombs and the one to the right is a mosque. The two are unbelievably gorgeous both in symmetry and in design.In fact, it is said that this piece of art was an inspiration for the building of the Taj Mahal!

A square pavilion, with 2 minarets forms the gateway to the complex. Both the tomb and the mosque have been built atop a raised platform that has arched pillars. The inner chamber of the mausoleum houses the tomb of the king, his wife, his mother and his children. It is a simple space with beautifully carved doors and windows. Overall, it’s a gorgeous complex to spend an hour gazing at the beauty of the architecture!

The rest of the monuments and ruins in Bijapur can be covered by simply hiring an auto-rickshaw to check them out quickly. And that’s exactly what we did! For Rs.150, one auto guy agreed to take us to Bara Kaman, Jod Gumbad, Gagan Mahal, Sat Manzil, Asar Mahal, Upli Buruj, Mihtar Mahal and Malik-E-Maidan. Since they were all within city limits, it took us less than 2hrs to cover them all.

The first, Bara Kaman, was the most atmospheric! It is the unfinished mausoleum of

Ali Adil Shah II. Stone arches with no roof surround Ali Adil Shah’s tomb in the center. It was lovely to wander through those arches wondering what the finished product could have looked like.Jod Gumbad and Asar Mahal are mosques where I wasn’t allowed to enter. Madhu found the interiors of Jod Gumbad quite interesting with the glass and tile work but was not allowed to take any pictures. Asar Mahal was once a palace, which was later converted into a Hall of Justice by the British and then finally converted into a mosque. It is said to have housed 2 hairs from the beard of the Prophet Mohammed! Gagan Mahal, another palace, which was also used as a Durbar Hall, looked beautiful from the outside as it sat majestically at the end of a landscaped lawn. However, the gates were locked by the caretaker and we couldn’t get a closer look. Sat Manzil, which 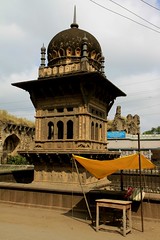 was Mohammed Adil Shah’s seven-storied palace is in complete ruins and can only be viewed from the outside. It’s located in a filthy alley with pigs running around, which was quite sad. Just across the street from the palace is a fabulous water feature called Jal Manzil that looked elegant in spite of the surrounding filth. Upli Buruj turned out to be a tall watch-tower atop which we had fabulous views of the city. It housed 2 large canons, which are said to have been assembled on the tower; it would have been impossible to lug them as a whole to the top! Close to the watch-tower, is Malik-E-Maidan, which houses another huge canon! It weighs 55 tons and is over 4m in length. It was a war trophy that was lugged to Bijapur by hundreds of men, oxen and elephants – phew! And finally, our last stop of the auto-tour was before the beautiful Mihtar Mahal, which although called a Mahal (palace) is actually a gateway to the mosque behind.

Not only did this auto-tour complete our Bijapur visit but it also concluded our tour of Karnataka. We spent 20 days here and enjoyed them thoroughly! The unseasonal rains, which we kept dodging throughout the state, made us miss the Kodagu Hills and the national parks to the south of Mysore. I guess that just gives us an excuse to revisit the state again someday in the future !