There are certain places that have the ability to capture 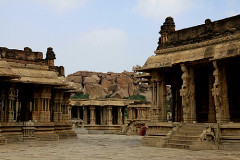 the romance and magnificence of an era that once was. In Bellary District in Karnataka, the group of monuments at Hampi (a UNESCO World Heritage Site) that belonged to the capital of the Vijayanagara Empire from 1336 -1565 is a perfect example.

A walk through the ruins in the area is more than just a sightseeing expedition. The monuments and ruins present contrasting imagery. On one hand, they portray the skill and artistry that existed 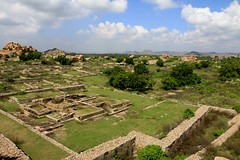 in the ancient period. On the other hand, they are a reminder of the mass destruction that was brought forth by attacking armies.

With a complex of palaces, temple and other monuments, Hampi is a large open-air museum that allows travelers to get a glimpse into the past. In addition, the rocky hills surrounding the city and the nearby Tungabhadra River present beautiful scenery that adds to the romance of this lost city.

There is almost no end to exploring Hampi and its surrounding areas. For a shorter two to three day itinerary, be sure to cover the must-see monuments. 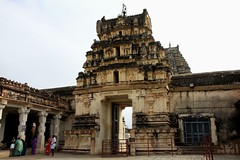 and is an important pilgrimage place among Shiva worshippers. Besides being one of the oldest functioning temples in India, it is the only temple in Hampi that was not destroyed by the Muslim confederacy in 1565. Within the complex are two smaller shrines dedicated to Shiva’s consorts – Pampa and Bhuvaneswari. What started out as a small temple, with images of the deities, was extended over the years into a large complex with halls and courtyards. Modifications were made to the temple by Chalukyan and Hoysala Kings. It is believed that the pillared hall in the center was added during the rule of King Krishnadeva Raya.

Just outside the Virupaksha Temple is a wide street with shops on either side. Look beyond the present day street vendors selling handicrafts and you’ll find a structured marketplace built from stone. This was the main market of the Vijayanagara Empire – a place where gems, spices, garments and crafts were traded by merchants from all over the world. At the opposite end of the street from the temple is a large monolithic statue of Nandi the bull. Nearby, there is a museum displaying photographs of Hampi captured through the lens of by Alexander Greenlaw in 1856.

Near the Virupaksha Temple is a small hill, called 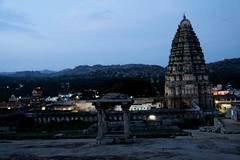 Hemkunt, on which there are several rock cut temples. The largest of these has images of dashavatar (the ten avatars of Vishnu) carved on its pillars. The top of the hill is a popular sunset view point for seeing the Virupaksha Temple and the surrounding stone monuments bathed in a magical orange glow.

On the road leading from the Sacred Center to the Royal Enclosures is Hampi’s largest statue. Lakshmi Narasimha represents the ferocious half-man half-lion avatar of Vishnu. The statue was damaged during the raid on the Kingdom by the Muslim confederacy, but the exquisite detailing can still be seen.

The living quarters of royal family is set around 3 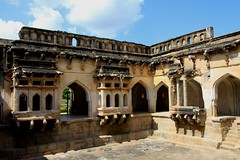 kilometers away from the sacred temple. Most of the fortified royal enclosure lies in ruin, but within it are several noteworthy structures such as the Mahanavami platform, from where the King would watch the parade during the Dussehra festival. The remains of many other buildings, including an underground temple can be seen.

One of the most interesting features of the royal enclosure is the Queen’s bath, a large tank that is 6 feet deep. It is believed that this was the royal bath of the Kings and Queens. 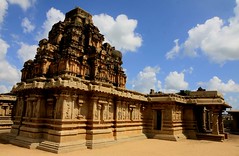 Among the ruins of the Royal Enclosure is the Hazara Rama temple complex, which gets its name from Hazar (thousand) images of Lord Rama. The walls have beautiful murals that depict scenes from Indian mythology, especially the Ramayana.

In an area set apart from the royal enclosure is the Zenana, where the women folk lived. The 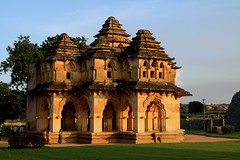 entire area is enclosed by a high wall with several watch towers along it. Inside is the Queen’s Palace, which lies in ruins, except for what can be seen of its wooden basement structure. The Lotus Mahal is a beautiful building inside the enclosure, which is built using a blend of Indian and Mughal architectural styles. Further down the path are the elephant stables – an interesting building with several large rooms – one for each of the Royal elephants.

While the Virupaksha Temple is renowned for its sacredness,

the Vittala Temple is an architectural masterpiece. This temple, which was dedicated to Lord Vishnu, was built in the 15th century by the Vijayanagara Kings, each of whom added to its structure. The center of attraction is the exquisitely carved monolith stone chariot of Garuda. Among the notable features of the temple are the musical pillars and carvings that depict life during that period, including images of Portuguese trading horses.

Just outside the temple are the ruins of a large marketplace, where horses were traded by merchants from across the world, including Portugal and Arabia. 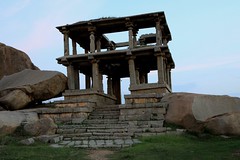 From Hampi Bazaar, a trail leads up to Matunga Hill, where the Veerabhadra Temple is located. The temple’s pavilion is the perfect spot for watching the sun rise over the ancient kingdom of Hampi. The top of the hill presents a bird’s eye view of the entire area – the Virupaksha Temple and Hampi Bazaar on the west and the Achutha Raya Temple to the east. In addition, you can see the rocky landscape for miles and catch glimpses of the River Tungabhadra.

The ruins and monuments of Hampi have a mystical quality that captivates travelers. Besides the most famous sights, taking a walk off the beaten track presents several exquisite monuments that will leave an indelible impression of the splendor that existed in the ancient kingdom.

One Response to Hampi – The Lost Kingdom