The Hoysala dynasty, which ruled pretty much the whole of modern-day Karnataka from the 10th to the 14th century, had its first capital in the town of Belur and from there moved it to Halebid. As evidence of this and their love for art, they left behind two fabulous temples in these towns: the Chennakeshava Temple in Belur and the Hoysaleshwara Temple in Halebid. Since both these places are relatively smaller towns, we were told that Hassan, a neighboring industrial town, would be a better base from where to explore them. So from Bangalore we boarded a Hassan-bound KSRTC bus, which took about 5hrs to cover the 186kms distance.

Hassan turned out to be a boring, dusty town with just a couple of good hotels to choose from. However, it did have excellent bus connections to the neighboring towns and this held us in good stead. The morning after our arrival we started early and caught a 7:15 AM bus to Belur, which is about 38 Kms north. The roads were not that great and the bus took about an hour to get us there. From the Belur bus stand, the temple is within walking distance of about a kilometer.

The Chennakeshava Temple is set within a large stone courtyard with a beautiful Dhwaja Stambha (flag staff) in the front. As we entered the courtyard we were accosted by a couple of men who offered to guide

us around the complex. We agreed as the temple had way too many sculptures and we needed someone to explain them to us. Since they were govt-authorized guides, we were given a receipt for the Rs.150 that we paid in advance for guide services. Looking back, though, I wish the govt had set up audio guides for these temples (just like the one for the Western Group of temples at Khajuraho) ‘coz then we would be confident of the veracity of the facts and explanations given to us. Sometimes I feel that the local guides simply make up some stories to keep their clients entertained!

Keshava being a form of Lord Vishnu. The beautiful temple is set on a star-shaped high plinth, which has 32 angular corners. The entire temple is built using soapstone, which is relatively easy to carve on and which hardens over time with great resistance to heat! This probably accounted for the fabulous, intricate carvings that the temple is completely filled with. Just looking at it boggles the mind! Since the temple was never ransacked by any invaders, it is in great shape, except for some vandalism done by locals. The figurines on the outer walls were mainly that of Hindu Gods and Goddesses and their different forms and avatars. But the prettiest ones were those at the very top and which served as brackets. They were of celestial damsels called Shalabhanjikas in different poses – loved them!

Just outside the entrance door of the temple are two sculptures, each depicting a man striking a large tiger! This refers to the legend that the first Hoysala king, whose original name was Sala, gained popularity after saving his guru from a tiger attack by striking the animal. In old Kannada, ‘Hoy’ means ‘strike’ – hence the name Hoysala!

Inside the temple, its 48 pillars are absolutely gorgeous! Built in black stone all the pillars have a unique design. However, the most popular among them is one called Narasimha pillar, which, when it was first built, could revolve on its ball bearings. The central four pillars before the inner sanctum surround a circular mandapa above which the ceiling is intricately carved. But it was too dark to see it properly. We paid Rs.10 per head to a couple of boys who lit up the ceiling using a large flood-light. This helped Madhu take some pictures of the masterpiece too.

A large water tank, now closed to the public, stands to the right of the temple complex’s eastern entrance. There are other smaller shrines spread around the main shrine as well. Since it was early in the morning, the stone courtyard wasn’t heated up yet and we could walk around bare-footed without any qualms! 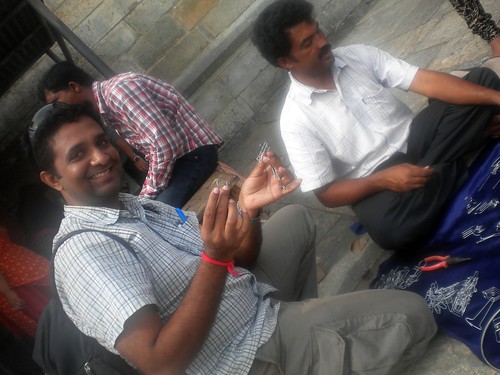 shoe stand selling little puzzles made out of metal wires. We squatted near one of them for a closer look. The puzzles involve removing a dangling piece of metal from a maze of metal in which it is entangled. The puzzle is meant to intrigue young children but it was just as challenging for us. The man selling the puzzles had to show us how to detangle most of them except for the simplest one, which we could figure out on our own. Impressed with his work, we bought 5 pieces, which I’m sure our 8-yr old niece will love. If not, her grandfather who loves such challenges would definitely enjoy them!

We took an auto back to the bus stand from where we immediately got a bus to Halebid, which was just 16 Kms east. By the time we got there it was about 12:30pm, so we ate lunch at a small street-side restaurant across from the bus station, before heading to the temple.

The Hoysaleshwara Temple sits grandly right in the middle of a busy intersection with Halebid’s bus station to its left. It’s laid out within grassy lawns

that have been nicely maintained and landscaped. Built in 1121 AD by Hoysala King Vishnuvardhana, the temple is dedicated to Lord Shiva. Unfortunately it was ransacked by Muslim invaders in the 14th century and was left in complete ruins. Over the years, the ASI has done a decent job of restoring the original structure and putting it all together. However, on closer inspection we did notice that several sculptures, especially those on the outer walls of the temple, were placed haphazardly and didn’t really match with the scheme of things around them.

Armed with the information given by the guide at Belur, we didn’t feel 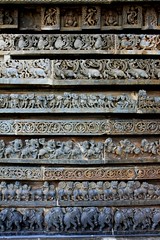 the need to hire another guide here. We walked around the temple complex on our own and enjoyed the freedom of recognizing the sculptures without help. The temple here sits on a star-shaped plinth as well but this one has 64 angular corners as opposed to the 32 in Belur. The sculptures on the outer wall are simply gorgeous and of really good workmanship. The walls have horizontal layers, each depicting rows of lions, elephants, flowers, deities, mythical creatures and swans. It was amazing to see that no two images of an animal were alike! It took us quite a while to walk around it all, taking it in. Also, here the temple has two shrines, one enshrining a Shiva Lingam and the other dedicated to Shantala Devi, wife of King Vishnuvardhan. The two are connected by a pillared hall, where the pillars look quite similar in design to the ones in Belur.

Just as we were finishing up with the temple tour, it started to rain and ruined our plans of visiting a small museum of sculptures placed in a corner of the courtyard. Thankfully, since the bus station was within running distance, we got to it quickly and were able to board a Hassan-bound bus within 5 minutes.

Epitomizing the influence of Jainism in the region, before the rule of the Hindu kings, is the gigantic statue of Gomatesvara in the village of Shravanabelagola. This village is about 51 Kms SE of Hassan and there were no direct buses to there. So on the 2nd morning of our Hassan stay we caught a bus to Chennarayapattna and from there caught another bus to Shravanabelagola. Although, this sounds tedious, the KSRTC bus service is so good that no time was wasted between the bus transfers. Moreover, the friendly bus staff always ensured that we caught the right bus and alighted at the right place; kudos to the KSRTC bus service!

Two hills, Vindhyagiri and Chandragiri, dominate the village of Shravanabelagola. The monolithic statue of Gomatesvara (aka Bahubali) 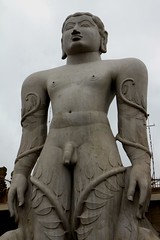 stands atop Vindhyagiri and can be spotted as soon as the bus nears the village. This hill stands behind the bus station while Chandragiri is across from it. There is a large Jain temple complex atop the latter as well but we decided to visit the Bahubali statue first. At the base of the hill, we placed our shoes at a shoe-stand and then climbed the hill over 614 roughly-cut steps carved into the hillside. It wasn’t a tough climb but did take away our breath several times. At the top we visited a Basadi (Jain temple) dedicated to Jain Tirthankars before climbing more steps to the Gomatesvara temple complex at the very top. Interestingly the entrance to this complex has an image of Hindu Goddess Gaja Lakshmi carved on the door frame!

From the front verandah of the temple complex, we could get excellent 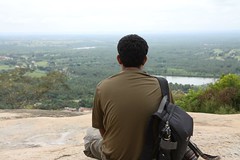 view of the Chandragiri Hill and the village in between at the bottom. And then we entered the main shrine in which stands the huge 54m high, naked statue of Bahubali, made of granite. Built in 983 AD, it is considered to be the tallest, monolithic statue in the world! The sculpture is exquisite in terms of quality and we couldn’t help but sit a while simply staring at it. Unfortunately, even though a sign outside the temple requests visitors to maintain silence, they were too excited to abide. But the biggest flouters of the request were the temple staff who loudly called out to visitors asking for donations for the maintenance of the temple. They were so persistent that I doubt the donations were only for the temple! There were several Jain devotees sitting before the statue with prayer books in hand. I felt really sad for them for not being able to pray peacefully at this ancient, religious site!

An exit door at the right side of the temple complex led out to a rocky bed where we could sit and gaze out at the wonderful scenery below. The gorgeous Karnataka country-side looked wonderful from here!

At the base of the Vindhyagiri hill, about 100m to the right, are two important Basadis 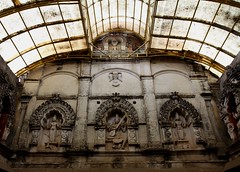 , which are conveniently located next to each other. Of them, the Chandranatha Basadi was really nice with exquisite murals adorning the lower half of the walls and large sculptures on the upper half. The other, Bhandari Basadi, is considered to be the largest with a huge pillared hall before the inner sanctum. However, it wasn’t very interesting, architecturally.

After lunch at a small eatery (probably the only one in town!), we walked over to the base of Chandragiri Hill and started on another shoe-less climb (shorter than the previous one) to the top. Since it was mid-afternoon, we wisely kept our socks on! At the top is a large complex 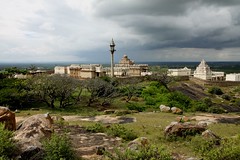 housing several Jain temples and a beautifully carved Vijaya Sthamba (victory tower). Most of the temples were plain and similar to each other except for a couple that had Hindu-temple-style, carved Vimanas. The most note-worthy amongst them is a temple called Chandragupta Basadi, dedicated to Emperor Chandragupta Maurya. It is believed to have been built in the 3rd century BC by Emperor Ashoka!

Although our stay in Hassan wasn’t particularly nice (overpriced accommodation + limited food options), its connectivity to these fantastic sites kinda made up for the annoyance! However, at Belur we noticed a newly renovated Karnataka Tourism-run hotel, which looked nice and was within walking distance of both the bus station and the Chennakeshava Temple. If we had known of its existence before, we would have preferred staying there instead!