While the Sacred Center can be completely explored on foot, the Royal Center, which is about 3kms from Hampi Bazaar needs an auto-rickshaw ride. Since there’s quite a bit to cover out there, and no way of finding another ride back, it’s best to hire an auto for a round trip. But this can get expensive as it takes around 3 hours (at our languid pace) to cover the major sites in the area. Luckily, there are several stores in Hampi Bazaar that rent out bicycles and mopeds on a daily basis. We hired a Kinetic Honda and that, along with a decent map of the Royal Center, worked out perfectly for us.

Hampi’s Royal Center, as the name implies, is where the Vijayanagara Empire’s royalty lived. It has everything from ruins of palaces to thatof royal baths and temples. About 2kms south of the Krishna Temple Complex, on the way to

Kamalapuram, a paved road turns left and this is from where the ruins of the Royal Center begin. The first on this path is the ‘Underground’ Shiva temple, which is at the junction of the left turn. It is so called because the complex has been built on a lower level than the street. Its squat and sturdy-looking Gopuram is reached via a set of stone steps that lead down to it from the courtyard above. Sadly, the actual shrine beyond the Gopuram is in complete ruin and can barely be toured.

Across the street from the temple is the excavated base of a palace. This is part of a group of excavated structures labeled as ‘Noblemen’s Quarters‘ as these were presumably the living quarters of members of the court. A few meters up the road from the temple a dirt trail on the left leads to a large boulder against which some steps have been built allowing us to clamber to its top. From here we had a bird’s eye view of the many ‘quarters’ that have been excavated. Today only parts of their basement remain.

In a walled enclosure across the street from this viewpoint is a pillared pavilion with arched ceilings, which could have been used as a mosque. Right next to it is a double-storied watch tower, which we had a lot of fun exploring. We climbed to the upper floor and loved the views from there!

A little further on, the road hits a T-junction, to the left of 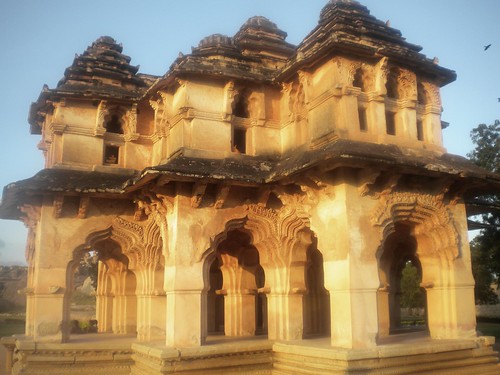 which is the fabulous ‘Zenana Enclosure‘. This is probably the highlight of the Royal Center. The high walls of the enclosure, though broken at places, are interspersed with double-storied watch towers of various shapes and styles. Inside, the first structure that meets the eye is the lovely Lotus Mahal. It is a gorgeous pavilion that was once used as a civil chamber. It is double-storied with arched pillars that have delicate carvings in plaster; it was quite gorgeous!

But something even more gorgeous awaited us behind a small doorway on the back wall of the enclosure. Through here we stepped into another courtyard and saw a long, one-storey, rectangular structure in front of us. It had 11 arched openings with domes of varying shapes  atop 10 of  them, while  the central

opening had a partly-ruined tower on the top. It looked  absolutely  grand and gorgeous! Strangely this lovely structure was used as an Elephant Stable with 2 elephants housed within each of the 11 openings. To its left is another one-storied pavilion which was apparently used by the royal family to view the parades in the courtyard before the two structures.

A little south of the Zenana Enclosure is the fabulous 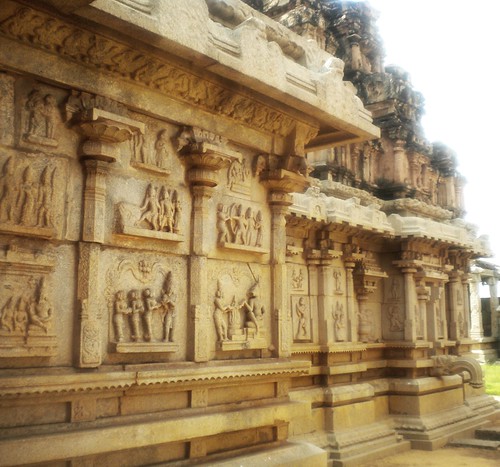 Hazara Rama Temple, dedicated to, obviously, Rama an avatar of Lord Vishnu. It was patronized by the royal family and was therefore of great importance! It has a squat, sturdy gateway with surrounding walls that are completely covered in friezes depicting a royal procession. Inside, the main shrine had a beautiful, pillared Mukha Mandapa (front pavilion) but the best part was the Sabha Mandapa (hall before the inner sanctum). It had four, black, polished pillars with fabulous carvings. Throughout the temple, the friezes depicted scenes from the epic Ramayana and these were beautifully carved; it was a feast for the eyes!

Further south of the temple is a large walled enclosure, which is probably the largest in the Royal Center. It housed the ruins of an Assembly Hall, 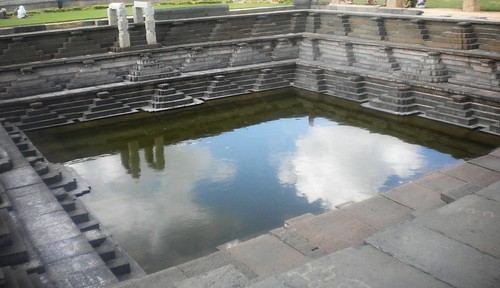 a couple of tanks and a fabulously carved platform. Of these a Stepped Tank, excavated in the 1980s, is quite pretty. The flight of steps leading down to its base created a lovely geometrical design. To its north is the Mahavami platform, at the top of which, it is believed, the royal family made sacrificial offerings. The entire base of the platform is carved with images of activities such as hunting, sports, etc that the royal family indulged in. We clambered to its top for some fabulous views of the area around.

A few meters from this walled enclosure, the road hits another T-junction. 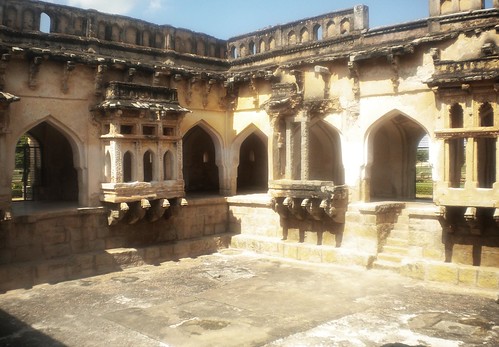 Here, on the left, is the pretty Queen’s Bath. From the outside it looks quite plain and not very interesting but on the inside it’s gorgeous. Although called Queen’s Bath, it is believed that this water pavilion was used by male courtiers accompanied by their, ahem, female companions. The square pool in the center is surrounded by an arched corridor that has lovely balconies jutting out over the pool. Crumbling plaster-work adorn the balconies and give us a glimpse of what it must have looked like back in the day.

At the T-junction, we turned left to visit the simple Chandrashekhara Temple complex that didn’t have any elaborate or unique carvings, but was pretty nonetheless. Beyond the temple is an Octagonal Bath, which is largely intact. A colonnaded gallery surrounds the octagonal pool with a platform of similar shape in the center. It was a nice place to sit for a while, away from the sun and rest. 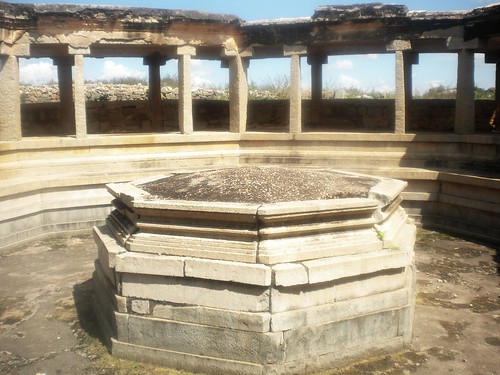 Turning back, the road led us back to the junction where we had started the tour of the Royal Center with the Underground Shiva Temple. Touring the highlights of the entire complex took us nearly 3 hours but it was definitely time well-spent! There are still many more ruins scatted around Hampi but we knew we didn’t have the energy or the inclination to check them all out. So we called it a day!

Hampi surprised us with the number of architectural delights it has scattered all around the village. It took us three whole days to view its highlights at our own pace; we enjoyed it thoroughly! However, more can be done to preserve these fabulous ruins, parts of which are currently used by the villagers to store stuff or graze their cattle in or as a public toilet! I’m not sure how this can be fixed but the Karnataka govt definitely needs to do something for both, the people living there, and for the ruins that were left behind by the state’s royal past.