During the reign of Hyder Ali and his son, Tipu Sultan, in the 18th century, Srirangapatna was the capital of the state of Mysore. Set just about 16kms north of the city of Mysore, it is a fortified island on the Kaveri River with quite a few relics from Tipu Sultan’s time. To visit these, we boarded a KSRTC Volvo bus (route# 316), which brought us to the town within half an hour. There we hired an auto to take us around all the major sites for Rs.200 – money well spent!

We started the tour auspiciously with a visit to the Sri Ranganathaswamy Temple, which enshrines a reclining form of Lord 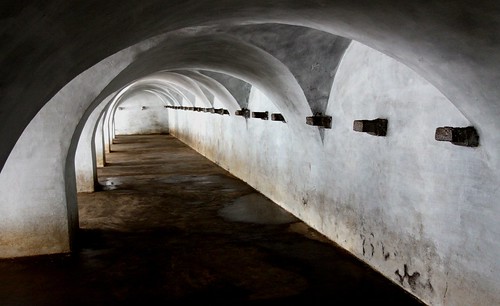 Vishnu just like the temple of the same name in Srirangam, Tamil Nadu. The town derives its name from this pretty 9th century temple. From here we visited Colonel Bailey’s Dungeons, which is named after Colonely Bailey who died here in 1780. Tipu Sultan used the dungeon to imprison officers that were caught during his battles against the British. The dungeon is quite well-maintained today with a fresh coat of paint on the walls and clean floors. A canon lies at the center of its arched walls. It’s said that during the siege of Srirangapatna the canon rolled back, pierced the ceiling of the dungeon and fell right to where it is lying today.

Our third stop was at the spot where Tipu Sultan was killed on May 4th, 1799. A marble memorial has been erected here and placed at the center of a grassy lawn, which has been enclosed within metal grills. The gates to the lawn were locked, presumably to keep visitors from littering or vandalizing the place. We took pictures through the grill and left!

The highlights of Srirangapatna, though, are the structures of Jama Masjid, 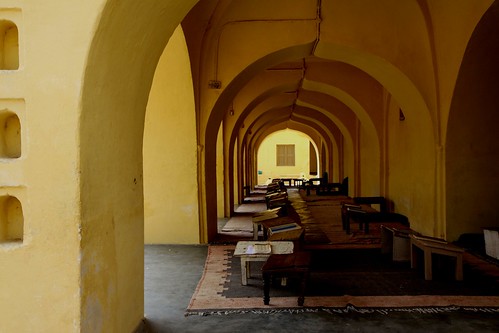 Summer Palace and Gol Gumbaz (tomb) commissioned and built by Tipu Sultan. The Jama Masjid, also known as Masjid-E-Ala, was built in 1784 after Tipu Sultan ascended the throne of Mysore. The masjid is simple yet very elegant with 2 double-storied, octagonal minarets. It has an open court within high walls and an inner, covered verandah. I hadn’t carried any dupatta/scarf to cover my head with, so I gazed at it from the outside while Madhu, with a handkerchief over his head, toured it from within. However, later I did notice other visitors enter the mosque bare-headed. 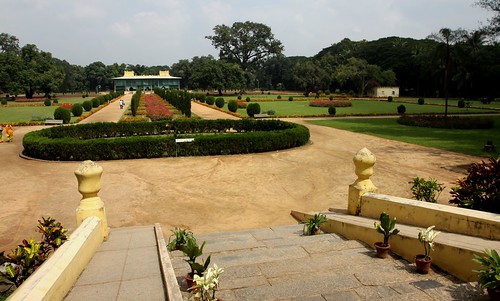 quite similar in style and layout to the one in Bangalore. However, here it is set in beautifully landscaped grounds and has painted murals on every inch of its interior walls. In no way is it a grand palace, which hinted at the king’s humility and reluctance to spend the state’s treasury on personal luxury. The palace is 2-storied but we were able to tour only the lower floor where the inner rooms held informative displays about Tipu Sultan and his brief reign over the state of Mysore. We were bummed that photography was completely forbidden within the palace.

The best of all, though, is the beautiful Gol Gumbaz, 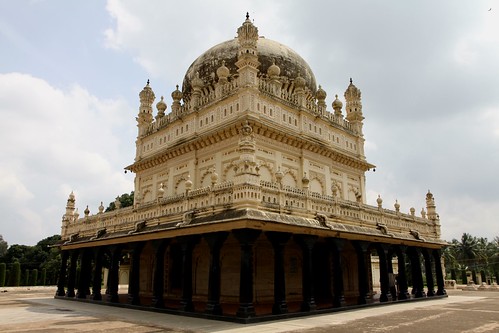 which houses the tombs of Tipu Sultan’s family. It was originally built by Tipu Sultan as his father’s burial chamber but later his own tomb was added to it. This structure is the most stunning one in Srirangapatna and has been beautifully maintained by the authorities. We were able to enter the inner chamber where three tombs were placed in the center. These belonged to Tipu Sultan and his parents. The chamber had latticed windows, which let in light beautifully. Outside the chamber were several tombs of other family members. To the right of the Gumbaz is an elegant masjid where prayers are held even today. 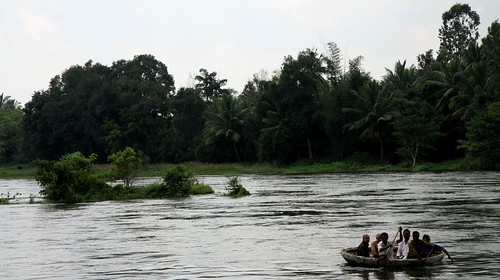 Sangam (confluence) where the river Loakpavani (a tributary of Kaveri) reunites with the Kaveri River. It has a ghat where the devout bathe in its waters and pray at a shrine dedicated to the snake Gods. Coracle rides are offered here but we weren’t in a mood to give it a try – looked a little risky, especially since we can’t really swim !

After lunch, we hired another auto for a return-ride to Ranganathittu, which is a small bird sanctuary some 6kms outside town. Here birds flock to the six islets near the banks of the Kaveri River. Boat rides are offered, which take visitors around the islets for a closer look at the birds. To our disappointment,

when we got there we learnt that boat rides had been temporarily suspended due to an increase in the water levels after heavy rains. With nothing else to do we walked around the sanctuary’s landscaped gardens and peeked at some of the birds that were visible from the 2 watch towers that overlooked the islets. The river looked beautiful and a boat cruise would have been a lot of fun. Oh well!

Srirangapatna is a great day-trip from Mysore and totally worth the effort! Good bus connections from and to Mysore make it easily accessible too.