Today, June 6th, we hired a cab to take us from Dalhousie to Jammu. The contracted price was Rs.2,900, about Rs.600 less than what the taxi union had quoted us the previous day. However, we should have known that such discounts come at a price; instead of one cab ride, we ended up having three!

Our first cabbie drove us to Pathankot and was on the phone throughout the drive. He took more than 3 hours to cover about 80kms, which was a little slower than we had anticipated. It turned out that he was making arrangements to transfer us to another car; apparently, he needed to get back to Dalhousie for something urgent that had come up. Since no time was wasted in moving from one cab to the other, we didn’t complain too much. Then just before the border crossing into the state of Jammu, our second cabbie pulled over to one of many dhabas that lined the highway. Here we had a vegetarian lunch (most dhabas here serve no non-veg as they mainly cater to the Hindu pilgrims heading to Vaishno Devi or Amarnath) of rajma chawal, paneer and rotis; it was quite delicious! Afterwards when we returned to our car, the cabbie said that he cannot go any further with us as his registration plates are for HP and the Jammu police will tax/fine him for not having an All India Permit! We were so mad! We knew immediately that we had been fooled; this second cab was arranged just to get us from the drop off point of the 1st cab to the pickup point of the 3rd! There was no point in arguing either, as we had already paid most of the money and didn’t want to risk having to find another ride on our own. The 3rd cab turned out to be a sturdily built SUV, Mahindra Scorpio and this made things marginally better; the ride in it to Jammu was nicer and faster than it had been in the small hatchbacks thus far. Eventually, we got to our hotel, Hari Niwas Palace, in Jammu at around 3pm.

Jammu is not really on any tourist itinerary as a destination. However, it is a stopover point for all 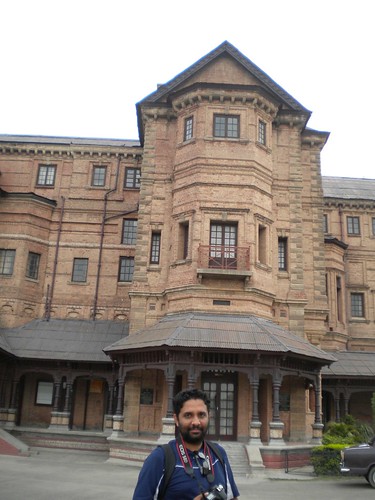 those heading to Vaishno Devi or further north to Srinagar, like us. Around 5:30pm, after a refreshing bath and nap, we stepped out to explore the city and also book a taxi ride to Srinagar for tomorrow. Only then did we realize that the lovely brick and stone structure next to the hotel was Amar Singh Palace – the last residence of the Dogra Rajas. The palace and our hotel share the same grounds and are separated by a nicely manicured, though small, lawn. Unfortunately for us, the palace doors close at 5pm. It is said to house a nice museum with relics from the days of the Rajas; we were quite disappointed at having missed it!

Our hotel is situated a few kilometers north of the actual city center and there is no public transport nearby. So the hotel staff directed us to cut across through its property to a gate at its southern end, from where we could either walk or catch a bus to wherever we needed to get to in the city. This was a pleasant walk along the palace walls and made us wish we had one more day to explore the grounds leisurely. Outside the palace gates, we boarded a 15-seater Matador van, which dropped us in the heart of the old city some 10minutes later.

Unfortunately for us, since today was a Sunday, most of the stores in the newer parts of the city were closed. In the old city, though, street stalls near Raghunath Mandir were open, mostly selling dry fruits and garments. We enjoyed strolling through this crowded bazaar; it was colorful and interesting! Raghunath temple is much revered locally and was bustling with people. There was a lot of security around it as well. No bags or cellphones or cameras were allowed within its premises, which automatically excluded Madhu and me.

Just across from the temple, is Residency Road. This street is relatively newer with restaurants, coffee shops, trendy stores and hotels. We walked up to a taxi stand and upon enquiring found that we could get a shared ride to Srinagar for Rs.500 per seat or hire a cab for Rs.3,800. The shared ride sounded very tempting but we knew it wouldn’t be the most comfortable thing to do especially since Srinagar is almost 300kms away. Moreover, the drive is supposed to be very scenic with a couple of viewpoints along the way. So hiring a cab made more sense but we decided to ask around a little more before booking. I’m glad we didn’t book immediately ‘coz a couple of blocks later we stumbled upon a taxi booking office run by JKTDC (far more reliable than the local taxi stand) and they offered to drop us off for Rs.3,500. For a govt office, the man behind the counter was courteous and quite knowledgeable! We immediately made the booking by paying some money as advance and agreed upon being picked up from our hotel at 8am the next morning.

For dinner, we stopped by Sagar Ratna restaurant, which is on Residency Road and right by Hotel Premiere. I was craving something different than the usual stuff we’ve been eating all these days and the words ‘South Indian food’ outside Sagar Ratna caught my attention . We knew that expecting good South Indian food in Jammu was sheer stupidity but the restaurant looked good and popular, so we decided to give it a try anyways. We ordered their South Indian thalis, which came with Sambar, Rasam, 3 vegetarian dishes with plenty of coconut (the mallu in me went yummmm!), puris, rice, curd and a sweet dish! And to our utter amazement, it was absolutely yummy! It’s only when we left did we realize the irony of it all: we had had some fantastic South Indian food at a restaurant in India’s northern most state !

What little we saw of Jammu we liked. It has a small town but distinct atmosphere! The streets were relatively clean and not terribly crowded; but, of course, that could be because we were there on a Sunday when most people stay indoors. In either case, it was an evening well-spent and a good start to the state of J&K!