After the trip to Betaab valley and lunch at Nathu’s Rasoi, we walked around Pahalgam village, window-shopping and generally exploring. The friendly staff at JKTDC’s Tourist Reception Center told us that one popular activity in the area is fishing. Madhu was very keen on trying a hand at this. We were told that the local Fisheries Dept, which was just up the road from the TRC, would give him the necessary permit and also help arrange for a guide and the required equipment. Thrilled, we headed out in search of it.

Unfortunately, the board announcing the Fisheries Dept’s building was a small one and we walked right past it, without noticing it. As we wandered on not knowing where to go, we decided to enquire with two young 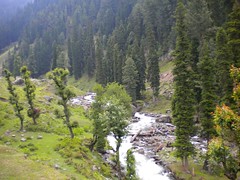 men who were standing outside the entrance of an alley. One of them, Imran, turned out to be the owner of a local guesthouse; he also owned and managed a ‘trekking, horse-riding, fishing, etc.’ activities company. He offered to take us fishing for a much lower price than that charged by the govt. But just so that we check this out for ourselves, he pointed us to where the Fisheries Dept was located and asked us to find out their prices before coming back to him for his rates. We did as told. The resident staff at the dept told us that the govt would charge Rs.2000 for equipment rental, permit and a guide for a 2hr excursion. Armed with this knowledge, we walked back to Imran’s guesthouse where he was waiting for us patiently. He offered us tea and biscuits and also introduced us to his father who regaled us with stories and pictures of their trekking expeditions with travelers. It was a lovely conversation and we ended up staying for more than an hour with them. Imran eventually said that he would take us on a day-hike, some 6kms upstream to a nice fishing spot, provide us with a packed lunch and all the required permits & equipment, and help Madhu fish to his heart’s content, all for Rs.1200. It sounded like a wonderful and reasonably-priced deal. We immediately agreed to meet the next morning at 9:30am at the guesthouse.

The next morning excited at the prospect of hiking in the area and fishing with a local we woke up early but ran into a snag with no hot water for a bath. So we had to wait until we were given 2 buckets to bathe with and this caused quite a bit of delay. Madhu called Imran to let him know we were running late but he didn’t sound concerned and asked us to take our time. When we finally got to his guesthouse, it was just about 10am and we were at our apologetic best, willing to start off on the trek immediately without further delay. But we were completely disappointed when Imran’s father walked over and said that since a senior official from the state’s Fisheries Dept was visiting the Pahalgam office we couldn’t go fishing that day. At first, Madhu and I couldn’t understand why a senior official’s visit had anything to do with us fishing. Later over more conversation with Imran and his father, we slowly realized that they were planning on taking us fishing without paying for the required permits; that was how they were able to offer us a lower rate! When senior officials visit, security is tightened and they tend to survey the fishing areas, which meant that illegal fishing would be tough to manage. This knowledge hit us hard! Imran then casually offered to arrange for horses and send his brother as a guide to visit Baisaran and the surrounding areas for the same price that he had quoted for fishing. But by this time, we felt cheated and knew we couldn’t trust him anymore; how I wish we hadn’t met him and had instead signed up with the Fisheries Dept. Moreover we were mad that he hadn’t told us about the fishing issue when we had called him earlier that morning. I guess he figured that once we got to his guesthouse, he could make us sign up for the Baisaran trip instead. We politely declined his offers and walked away; a BAD start to the day !

Not wanting to waste the rest of the day, in spite of a slight drizzle, we walked over to Pahalgam’s taxi union stand and got ourselves a cab for a round trip to Aru valley. It cost us Rs.550 with a one-hour stop in Aru included; a longer stay would cost us extra; fair enough! The cab was assigned immediately and we took off, following Lidder River’s right fork upstream through some of the most scenic areas ever. Again, we missed having a car of our own to be able to stop and enjoy the place at our own pace. Aru valley is at the northernmost tip of the Pahalgam area and according to maps, the road doesn’t go any further. We got there around noon and were deposited in the car parking area.

The beautiful greenery of Aru valley is fringed with a chaotic, crowded, dirty 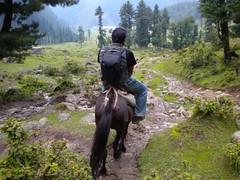 (mainly because of the rains) market area. We walked through here and passed a group of horsemen idling with their horses. A couple of them approached us but we walked on quickly. Our guidebook hadn’t given us any information about Aru except that it was pretty, which in fact it was, so we weren’t sure what to do or where to go. Madhu walked over to JKTDC’s tourist bungalow and enquired with the caretaker there. He suggested that since we only had limited time, we should opt for a horse ride as it would cover more ground, taking us up the surrounding hillside to give us good views of the area. If we had had more time and if the weather had been better, walking would have been better. But since we didn’t have an option, we walked back to the horsemen and struck up a deal for a one-hour ride around the valley on two horses for a total of Rs.500. A young lad sat us on his horses and then we took off on a very memorable ride around gorgeous Aru valley. 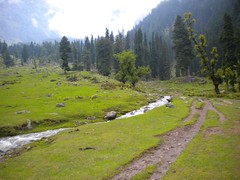 already wet surface. The climb was steep and treacherous at places especially since the wet rocks and slushy tracks made the horses slip and trip. Our first stop was by the edge of the cliff overlooking the river. Right across was a huge blob of snow that hung precariously over the river from the hill. For tourists who haven’t had a chance to experience snow yet, this must be an exciting sight. Then we went further up passing cattle and horses that were grazing peacefully on the lush green growth. Our 2nd stop was at a small tea shack, the only one, near the top of the hill. From here the views out to Aru village were absolutely gorgeous! The slight drizzle and mist-covered mountains made the place look paradise-like! We immediately wished we had planned on staying at least a night here. The young horseman told us that some visitors, usually adventurous foreigners, go off on 3 to 4-day horse safaris following the Lidder River further upstream. Then they fish and/or camp for a day or two before returning. If we had known better, we would have definitely loved to do the same. In fact, now I wish the lad hadn’t told us about this option in the first place .

We had a cup of Kahwa each, took pictures and then headed off towards 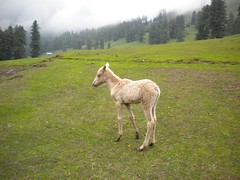 the adjoining hillside, at the top of which is a large, flat, lush green meadow. It was as gorgeous as any of the other Kashmiri meadows we had seen so far. But what added to its enigma was the fact that another popular Hindi film, ‘Karma’ had been shot here back in the 70s . There were many young foals and calves prancing around here and we had a fabulous time gaping at them; it was the highlight of our visit to Aru valley. Unfortunately, this was also our last stop of the day. When the horses finally took us back to the market area, we realized that it was almost 2pm. By now it had started to rain steadily. We paid the young lad, thanked him for a wonderful experience and hurried back to our waiting cab.

Throughout our journey back to Pahalgam we wondered if we should pick our bags and come back to Aru to explore it better. But we eventually realized that it would only add more days to our already expanded Kashmir itinerary, which may not be worth the effort especially if the weather continued to play spoil-sport. Someday, though, we would love to be back¦