Apart from touring the city, a stay in Srinagar offers many day trips to the surrounding countryside. Most visitors get to Jammu, hire a cab and set out by road to Srinagar. On the way, the pious stop at Katra for a day-hike to the Vaishno Devi shrine followed by a night stay at Pahalgam before getting to Srinagar. After touring the city, day-trips are then made to Gulmarg and Sonamarg, which are hill-top destinations just about 2hrs away. This typical 1-week itinerary works beautifully for most visitors. We didn’t opt for it as we prefer keeping our itinerary a little more flexible. But this means having to arrange every single excursion on our own, not to mention the additional costs. We have already spent more than Rs.10,000 on cabs to get from Dalhousie to Jammu and from there to Srinagar (including the two-night halt at Patnitop). So when we heard of a state-run bus service to Gulmarg and back, we jumped at the opportunity to save some moolah! Unfortunately, at the end of the day, it didn’t turn out to be a very smart move!

The JKSRTC (Jammu & Kashmir State Road Transport Corp.) buses ply from a depot, which is right next to the Tourist Reception Center (TRC), south of Dal Lake.

The bus turned out to be a large, super-deluxe one with comfy seats at Rs.180 each (round fare). Once everybody was seated, it started out at 8:45am, 15minutes before schedule; we were thrilled! However, the traffic in Srinagar city was a mess and the going was extremely slow. To add to it, the bus driver took a detour through some muddy, unpaved alleys in order to get to a remote gas station that was at least 15 minutes out of the way. But once we were outside the city limits the driver tried his best to make up for lost time. We were happily looking forward to being in Gulmarg by 11am when the bus made an unnecessary, half-hour stop in a village called Tangmarg, which is just about 11kms from our destination. It was just to get the passengers to shop at the stalls and hire snow jackets and shoes for the trip to the snow-peaked mountains of Gulmarg; very annoying! Anyway, when we finally got to Gulmarg it was about 11:45am. The bus would start back for Srinagar at 4:45pm, so we were told to be back at 4:30pm sharp. This meant that we had less than 5 hours to tour the place.

The main attraction for most visitors in Gulmarg is the chance to play in snow on the mountain tops. 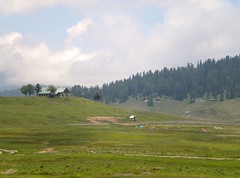 To help this, the state govt, with the help of a French company, has built a two-stage cable-car ride that would take visitors up to 13,400ft to experience snow. We had bought tickets for the 1st stage (Rs.300 each) at Srinagar’s TRC yesterday in order to avoid the queue in Gulmarg; however, tickets for the 2nd stage have to be bought on-site. The bus dropped us off at the main market area, which was crowded and chaotic. From there it was a 15-minute walk to the cable-car, or Gondola as it is called, station. On the way, we noticed a fantastic meadow to our right; it looked lush green and very inviting. However, we had to keep our eyes on the road as well as there was horse-poop everywhere!

The Gondola station was as packed with people as the market area. However, the queue for boarding the stage 1 cable-car was short and we were whisked away to stage 2 within

a few minutes. En route the glass enclosed ride gave us a breathtaking view of the Gulmarg meadow below! At the drop-off station, we immediately bought tickets for stage 2 (Rs.500 each) and then stood behind a large mass of people to board the 2nd cable-car ride to the top. Madhu and I felt like cattle as we stood squished in between hundreds of people, mostly families with little children in tow, outside the cable-car station. When the doors finally opened to let us in, there was a crazy rush but inside everybody managed to queue up. We hoped that the line would move quickly but just as Madhu and I neared the boarding area, the cable-car staff stopped letting people board. Apparently, it had started to snow on the mountain top making it unsafe to operate the cable-car machinery. Cursing our luck, we stood impatiently, fretting if the cable-car service would resume at all or not. Time crept by and soon it was past 2pm, leaving us with less than 2 ½ hours to get back to our bus. We realized then that this whole bus trip had been a BAD idea! If we had hired a car, we could have started early, got to Gulmarg by 10am and then started back as late as possible, giving us the entire day to explore the area. Better still, we could have stayed the night!

When the snow finally let up it was past 2:30pm. The 2nd stage cable-car operations 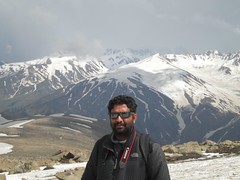 resumed and brought us to the snow-capped mountain peak at 13,400ft in less than 10 minutes. By this time Madhu and I were in a surly mood and a little disappointed at how the day had progressed. But once we set foot on the snow and saw the landscape around us, all of this was momentarily forgotten! It was a fabulous sight! We’ve never been on snow-covered land like this before; the altitude and views simply added to the experience! The only annoying part was the harassment by vendors who kept trying to get us to hire sleds. They offered to seat us each on a sled, pull it up to the ridge at the top and then slide down the snowy slope with them sitting in the front, guiding and controlling the slide; it didn’t quite look or sound safe plus the fall from the mountain peak would have been long and disastrous. We politely declined!

The muddy snowy slope was quite slippery. Madhu and I treaded carefully as we climbed 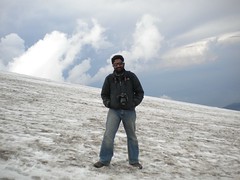 slowly and clumsily. It was fun and funny! All around us people were going crazy with the snow. They were slipping and sliding, throwing snow balls at each other and just plain thrilled to be there; it was an infectious environment! We walked mid-way up the slope and hung around for about half an hour taking pictures and enjoying the lovely landscape. But apart from that, there was really nothing else to do.

The ride back down both stages of the cable-car was quick and uneventful. It was raining quite steadily when we got down to the base around 4:15pm. So with bad weather and no time to explore anything more in Gulmarg, we hurried back to our bus. Unfortunately, not everyone on the bus was as punctual as us; people took their own sweet time. Finally, at 5:20pm the bus started off even though one couple was still missing. At Tangmarg, it stopped again to allow people who had rented snow jackets and shoes (our down jackets and trekking shoes had worked just fine!) to return them. By the time we were dropped off at Srinagar, it was 7:30pm!

Overall, it was a disappointing trip to Gulmarg. It is a beautiful area and deserves much more than just a few hours of visit. We truly wish we had planned an overnight stay, which would have given us ample time to walk around the green meadows in the evening, and/or early morning, enjoying it just as we had enjoyed the one in Khajjiar, HP. Madhu is keen on returning for an overnight stay but I think we need to move on. There’s so much more to see in Kashmir…