This was an exceptionally fantastic day and will probably be 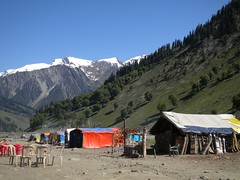 listed amongst our top travel experiences in India! We decided to take up Noor Hassan’s offer of a guided day-hike across the Thajiwas Glacier. We were to meet him by the tea stalls at 8am but with the usual hot water issues for a bath, we didn’t make it there until about 8:45am. To our dismay, we didn’t find him waiting as we had hoped! Instead, we met one of the helpers, Qasam Din, who had helped in our snow-sledging expedition the previous evening. He was an elderly, statuesque man with chiseled, sharp features, dressed traditionally in a Kashmiri pheran, complete with a turban covering his scalp; looked like the typical Kashmiri Pathans depicted in Bollywood movies! 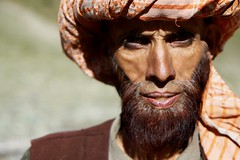 Since Noor wasn’t around, he offered to take us on the day-hike. He said that the round trip would take about 3 to 4 hours, taking us towards some streams and waterfalls that spurted out of the rocky mountains beyond the glacier. We agreed and after some breakfast (we were the first customers of the day!), headed out with him at around 9:30am.

The 2hr walk across the glacier was a unique experience and quite thrilling! We trudged slowly and carefully on the snow, which was a very slippery task as our regular trekking shoes are not really 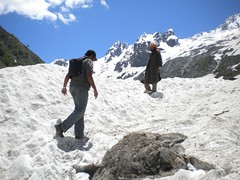 meant for it. But, in spite of that, we did well. Our shoes are waterproof, which ensured that no icy water got to our feet and by placing our feet firmly one before the other (as instructed by Qasam), we didn’t slip and fall as much either. The hike took us higher up the glacier’s slope from where the views to the valley and surrounding mountains were breathtaking! Along the way, Qasam Din pointed out a couple of colorful tents atop a cliff overlooking the glacier; this was where he lived with his family and his brother’s family. Apparently, he and most of the other men who offer horse and sledge rides in Sonamarg belong to the nomadic Gujjar-Bakharwal tribe. They come to Sonamarg at the onset of the summer months to earn money and then return to the plains of Jammu before winter begins.

A few meters further on, Qasam asked us if we would like to stop for some tea. At that point we were in the middle of nowhere and we wondered where he could procure tea for us. He pointed to a couple of small tents, which we hadn’t noticed until then, on a neighboring hill and said that his tribe-mates who lived in them would be more than happy to provide us with some. The opportunity to actually enter a Bakharwal’s home and sip tea with them sounded more enticing than just the prospect of a break, so we readily agreed. As we climbed up the rocky slope to their home, a couple of dogs started barking. The ferocious, cattle-protector dogs of the Gujjar tribes are legendary and feared by everyone. We didn’t proceed until one of the Gujjar women emerged from the tent and distracted the dogs with food.

The head of the Bakharwal family whose home we entered turned out to be none other than Noor Hassan. He was equally surprised to see and immediately started to apologize for not meeting us near the tea stalls in the morning. He explained that he had hit his head causing a bruise and a bad headache. Since his sledging business picks up only after 12pm when the day-trippers from Srinagar start to show up, he had decided to stay indoors and rest until then. He didn’t tell us but I guess Qasam was sent as a replacement.

The tent was large enough to sleep about 4 people comfortable. A small, cooking stove sat in the center and thick carpets were placed around it along the walls of the tent. We were warmly welcomed in and we made ourselves comfortable on one of the carpets. Noor’s wife ran off 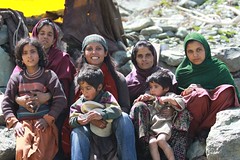 to make tea, while his kids, a young girl and a toddler boy, hovered at the tent’s entrance watching us with a lot of curiosity. Noor informed us that there was a teacher in their tribe who traveled with them wherever they went and ensured that the kids received at least some basic education. We asked him why they moved around like this and not settle down somewhere like most others. To this, he simply shrugged and said that this is what Bakharwals have done for centuries and therefore, there was no other alternative. The only change they’ve made to their lifestyle, apart from education, is that these days, women and kids travel by buses or shared cars to the plains and back. The men have no choice but to go on foot as they have to bring the cattle and horses with them.

When tea was brought, it was absolutely yummy. Noor pulled out two pieces of Kashmiri bread from a small jar and warmed it up before handing them to us. As we dug into the tea and bread, I couldn’t believe our luck! Ever since we had entered J&K we’d seen the mysterious Gujjars traveling on foot in large numbers with their cattle and their unique mud homes sitting camouflaged against the muddy hillsides. They had seemed mysterious, not particularly friendly and cut-off from the rest of the world. But here we were, not only chatting with them like old friends, but also sitting in their home, sharing a cup of tea and breaking bread; it felt too good to be true!

Later, after thanking Noor profusely for his hospitality, we continued on towards the 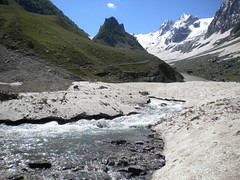 waterfalls. We got close to them in about 15minutes and then realized that they were nothing more than large streams of melting snow; pretty, nonetheless! We planted ourselves on a large boulder across from them and then marveled at how far we had walked from the base of the glacier. The views from there were unbelievable! We were surrounded on 3 sides by rocky, snow-clad mountains while before us was the valley of Sonamarg with green meadows and a shimmering river snaking right through it!

The walk or rather slide back to the base was quicker and scarier than the hike up. Quicker because Qasam took hold of one of my arms and led me along to ensure I stay safe. Scarier, because his support didn’t really help! The snow was too slippery for my clumsy descent and his steps were too long for me to match. So I happily slid and fell every few meters much to the man’s concern. If it weren’t for Qasam, I’m sure I would have broken a few bones along the way as well! Madhu, on the other hand, did fairly well and seemed to be enjoying the challenge of staying on his feet. By the time we got to the tea stalls, it was almost 1:30pm. We lunched on Maggi with Qasam and then eventually bid him farewell; we couldn’t thank him enough for providing us with such a wonderful experience!

Later we roamed around Sonamarg’s beautiful meadows, enjoying the 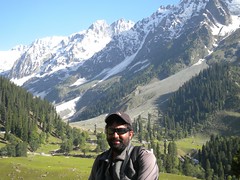 lovely scenery all around. When it got too hot, we found shade within a govt-built gazebo, which sat atop a small hillock. Here we stretched out on the metal benches and immediately dozed off; it was so darn relaxing! Late in the afternoon, refreshed from the brief nap, we climbed a neighboring, taller hillock for better views of the valley. By the time we strolled back to our hotel, it was 6pm; we felt like we had covered the whole of Sonamarg on foot in a single day!

We’ve been in Kashmir for about 12 days now and if it hadn’t been for the trouble in Srinagar, we would’ve stayed longer and explored much more. Unfortunately, that was not meant to be. We can only hope to return someday to this gorgeous land, which is not just pretty but is inhabited by some of the most warm and hospitable people we’ve ever come across! Cliched as it may sound, the phrase ‘Paradise on Earth‘ truly does belong to the Kashmir valley.