Much has been said about Kashmir valley’s breathtaking beauty. It’s probably on every traveler’s must-visit list, just like it has been on ours. But the strike in Srinagar earlier this week reminded us that the region is still not completely free of the baggage it has been carrying since independence. We spent two days at a hill-station en route to Srinagar hoping with all our heart that we don’t have to return without getting a chance to see this wonderful region. And luckily, by Tuesday evening, things seemed to have returned to normalcy in the city. So today morning, we started from Patnitop at 5:30am in order to get to Srinagar around lunch time – we were both excited and nervous about the trip!

The drive from Jammu to Srinagar on National Highway 1A is unbelievably scenic! Everything looked picture-postcard perfect and lush green. The only thing that startled us (and probably most other first-time visitors) is the presence of gun-toting, army personnel throughout the highway. They stand in complete attention staring at every vehicle passing by. We had read about their heavy presence in the area but seeing them and their hard work in person was a completely different experience; it added to the already tense expectation of what was awaiting us in Kashmir.

Roughly two-thirds way to Srinagar is the Jawahar Tunnel, which connects Kashmir Valley with Jammu.

It provides round-the-year connectivity of the region with the rest of the country. It is about 2.5kms long, with every 100m marked. Built at an altitude of 2194m and through the heart of a mountain, this tunnel is considered to be an engineering marvel in its own right. As we exited it, a signboard proclaiming ‘Welcome to Kashmir, Paradise on Earth’ greeted us; it was a heartwarming sight! 2kms later a viewpoint called Titanic Viewpoint gave us our first glimpse of the valley: green mountain peaks with green paddy fields at the base; simply beautiful!

About 24kms before Srinagar, in a little village called Awantipur, stands the ruins of a 9th century temple. 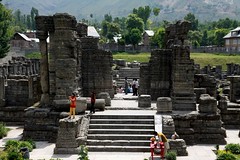 It is right by the highway with a parking lot across the street. The Archaeological Society of India has done a good job of maintaining the compound within which the temple, or what’s left of it, stands. There’s a green lawn bordered by flowering plants in the forecourt and around the ruins as well. Only the tall platform and some crumbling walls of the temple remain today. Ruins of smaller shrines stand at the 4 corners of the temple courtyard. A couple of authorized guides offered to give us a more detailed explanation of the temple’s history and origin but we were in no mood for it. So we simply walked around, took a few pictures and left.

Just before hitting Srinagar, we passed the village of Pampore, which is world famous for its saffron production. We saw fields upon fields of saffron on either side of the main highway. The saffron flowers bloom in late August turning the current green fields into varying shades of purple; it must be quite a sight! The village market had several ‘authorized’ or ‘genuine’ stores selling ‘best quality’ saffron, which was quite tempting. But I decided to do a little more research or at least ask around before making a purchase.

Right on schedule, we got to Srinagar around 1pm in the afternoon. Our driver knew of a houseboat owner who was waiting to receive us at one of the piers on Dal Lake. 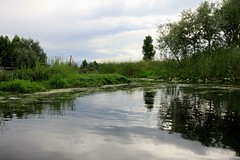 Our first impression of the city was not great. We had reached at a time when tourist traffic was at its peak and the place looked quite chaotic. Even the houseboats that lined Dal Lake did not look impressive! We had images of Kerala’s houseboats that ply on its backwaters; those sail across the waters giving its occupants a feeling of seclusion and privacy. Out here, though, the houseboats were all marooned in one place quite close to each other. None of them looked pretty, private or exclusive at first sight! We immediately wondered if all the hype about Kashmir’s houseboats was just that: hype! But this feeling didn’t last for long¦

We left our bags in the car and clambered aboard a small boat along with our driver’s friend, Rashid, who 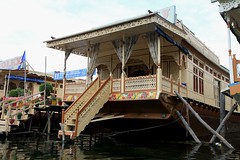 offered to show us around the houseboats. We rode to his houseboat, which, although cheap, was not as nice as we would have liked it to be; it looked old and musty. So we declined to stay there. He then took us to another that was run by a Kashmiri guy with a heavy Australian accent; apparently his brother lives in Australia . He insisted on speaking to us in English while showing us around the houseboat, which was quite grand and nicely furnished. But his rates were a little too high (Australian rates, perhaps?) and not worth bargaining. Tired, we asked to be dropped back at the roadside where we could look for hotels to stay in; we figured that it would be easier to do some online research on recommended houseboats instead of checking each one of them out personally. However, Rashid wouldn’t give up; he insisted on taking us to one last houseboat. This was called Yuvraaj and was run by Fayaaz. It was as nice as the Australian houseboat but the prices were relatively more reasonable. Moreover, we liked Fayaaz and felt comfortable around him. So, much to Rashid’s relief, we agreed on a price and settled on a double-room in Houseboat Yuvraaj.

The main tourist action in Srinagar is centered around Dal Lake. The street called Boulevard at its southern bank is lined with street-side vendors, handicrafts stores, hotels and Dhabas. Further east on Boulevard are the Mughal gardens of Srinagar. To the northwest of Dal Lake is Srinagar’s old city with its mosques and atmospheric lanes. We figured that about 2 days of sightseeing would be enough to cover all these areas in the city coupled with Shikhara rides in the evenings and it should have been!

After checking into our houseboat room, we left for shore again to grab some lunch and run a couple of errands. We ate yummy Tibetan food at Lhasa restaurant and then headed to Srinagar’s Residency road, which is its newer market area. Here we got some bank stuff done and then went in search of a bookstore. Up until now, Lonely Planet’s India guide had worked pretty well for most of our travel. However, its Kashmir section didn’t offer enough details and was almost a little too negative about the area; we could hardly figure out what was worth visiting and what was not. So we knew we needed to get a better book. Our search took us to Gulshan bookstore on Residency road. It is probably one of Srinagar’s nicest bookstores with a fantastic collection of books, especially on Kashmir and its history. Here the store owner gave us a book called Discover Jammu Kashmir (www.discoverjammukashmir.com), which, although not of the best print quality, seemed to be exactly what we were looking for; it gave details that LP had missed out on. To see if other bookstores had more books on Kashmir, we continued on Residency road until it hit Lal Chowk, the heart of Srinagar’s old city. Here the buildings and stores, spread across dusty, wide streets, looked right out of a history text book. There were tons of bookstores but they mainly catered to the local university students; there were hardly any travel-related books.

We were back in our houseboat by 6pm. Around 7pm, Fayaaz arranged a Shikhara ride for us.

In one hour, the boat was to take us around Dal Lake and then drop us at one of the piers from where we planned to head out for dinner. This was our first Shikhara ride ever; we didn’t know what to expect. But in the end, we were totally blown away by the experience! Lying on the soft cushions of the boat, sailing smoothly across the waters of the lake, Madhu and I were transported into a different world altogether. Suddenly everything around us slowed down and our minds were lulled into a deep sense of contentment. Enterprising youth in tiny boats swung close to our Shikhara and sold us Buttas (roasted corn on the cob), which we munched on while gliding along. The ride took us past Nehru Park, a small island in the center of the lake. It was quite crowded and chaotic with picnicking families. Here one can sign up for water-skiing on the lake; we preferred to stay on the Shikhara. Behind Nehru Park, in one of the narrower parts of the lake is the ‘Floating Market‘ where they sold everything from groceries to Kashmiri handicrafts on marooned houseboats;

it was quite fascinating! Past this was Meena Bazaar, which had stores on the banks of the lake. These had similar ware as the floating market but seemed to concentrate more on the touristy stuff. We also passed ‘floating gardens’ where locals raised vegetables in the summer months; absolutely ingenious! By this time the sun had set completely and the evening prayers rang out loud. It gave the place a fantastic, atmospheric feel! We realized that this was the magic of Srinagar; a Shikhara ride on Dal Lake had just become one of our favorite experiences in India!

Later, we were dropped off at one of the piers from where we walked the length of Boulevard in search of a place to eat. Since Madhu and I had heard a great deal about Kashmiri’s exquisite, non-vegetarian, Wazwan cuisine we were very keen on giving it a try. However, most restaurants and Dhabas lining Boulevard were vegetarian, serving mainly Punjabi food. So we took an auto to Mughal Darbar, a popular restaurant serving Wazwan cuisine. It’s located near Residency road on the 1st floor of a 2-storey building. The restaurant is so popular that there are others in the area with similar-sounding names (or even the exact same name!) trying to confuse the visitors and lure them in. We soon found out why it was so popular: not only is the Wazwan food absolutely delicious, service was top-notch too. We ate Mirchwanga Korma (spicy mutton curry) and Seekh Kababs with rice and rotis; it was the best ever!

Our first evening in Srinagar has been absolutely wonderful. We can’t wait to see and experience more!

6 Responses to Kashmir, Paradise on Earth