On our final day in Pahalgam, we packed our bags, left them at the hotel and 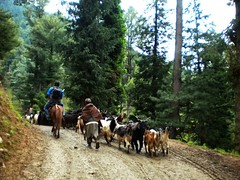 headed out to explore Baisaran, the village’s main attraction. Since it’s just about 3kms from the main market area, walking would have been the best option. But with slushy mud tracks, that didn’t seem like a fun thing to do. So we went in search of the friendly horsemen that we had met on our way to Betaab valley a couple of days before. We found them crowded outside one of the fancy resorts in our lane. When they saw us approaching, they immediately recognized us and warmly came over to shake hands with Madhu and check if we could give them any business. After a little bit of friendly bargaining, a deal was agreed upon and we set off on a 3hr ride to Baisaran including stops at a couple of other points along the way.

Baisaran is a large, grassy meadow with small rolling hills and fantastic 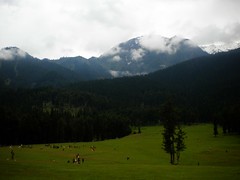 views of the mountain peaks that surround it. The wide, mud track that leads up to it from Pahalgam village is beautifully shaded on one side by Deodhar trees, with lovely valley views on the other. At the entrance to the meadows, we bought tickets for Rs.10 each and then wandered around aimlessly. Because of the rains, the grass was quite wet so we couldn’t park ourselves in one place. There were no benches provided either so all we could do was walk. There were many locals selling hand-made shawls. They were similar to those we saw in Pahalgam’s stores but the prices were slightly cheaper. The meadow is fringed by a thick forest of Deodhars; I could almost imagine some Bollywood songs being filmed in such a scenic locale .

From Baisaran, the horsemen guided our horses through a thickly wooded 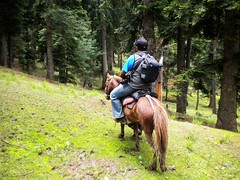 area avoiding the slushy trails on which even the horses were slipping. This shortcut of sorts took us through a very quiet, serenely beautiful, wooded area, crossing narrow streams and wild growths of flowering shrubs. After about 10minutes we got back onto the trail, which led to Dabiyan: a small settlement of Gujjar tribes consisting of low-roofed mud huts enclosed within a wooden fence. Gujjars are a nomadic tribe which moves up to the mountains in the summer months to graze their cattle in the nearby meadows. Just before winter hits they move back down to the plains, on foot, cattle in tow. We’d seen their homes from a distance ever since we had gotten to 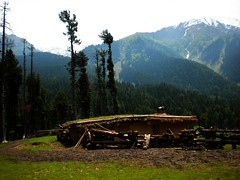 Kashmir but this was the first time we were seeing it up close. Just being able to take pictures of these homes from within 20feet was good enough for us but the horsemen surprised us by saying that we could actually enter one! So alighting from our horses, we removed our shoes outside one of the homes and cautiously entered the small but amazingly clean space. It consisted of a kitchen area with a wood stove, a few utensils and cooking vessels, and a couple of rooms for sleeping, which were laid out with thick rugs; it was absolutely fascinating.

Back on the horses, we rode for just about 5 minutes before stopping at a viewpoint 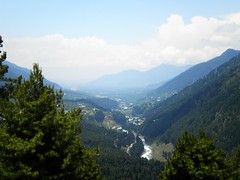 from where the snaky contours of the Lidder river with its green banks could be clearly seen. There was a small tea shop where we took a short break sipping Kashmiri Kahwa tea – the perfect drink for a cool, wet morning. Many of our fellow-Indian travelers, on the other hand, seemed a little too excited for a break. Some, to our dismay, clambered atop nearby trees in order to get that perfect picture; it was quite entertaining to watch .

Our last stop of the day was besides a gushing, though short, waterfall on the Lidder river. It was a picturesque place but there were too many people around and we couldn’t find a peaceful moment to relax in. So we didn’t stay for long and soon headed back to the Pahalgam village; it was about half an hour 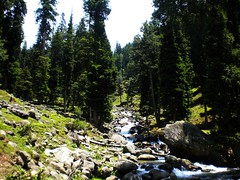 away. By the time we got dropped off near Nathu’s Rasoi, it was past 1pm; the whole ride had lasted for more than 4hrs! Madhu and I had really enjoyed it and ended up tipping the horsemen extra.

To get back to Srinagar we figured that the JKSRTC bus, which starts out at 5pm, would be our best bet. So after lunch at Nathu’s Rasoi (AGAIN!) and some refreshing lassi at the neighboring Punjabi Rasoi, we went back to Mir Lodge, picked our bags and took a cab back to the market. The plan was to sit in the JKTRC’s reception area until it was time for the bus to leave. But Mir Lodge’s manager, who had hopped into our cab for a free ride to the market, convinced us that it would be faster to take a shared cab to Anantnag; from there we would easily get another shared ride to Srinagar. However Anantnag has the reputation of being the ‘Pakistan of India’ where trouble is always around the corner. So Madhu and I hesitated a bit but the manager assured us that these reputations are media-created and that we would not face any problems. Since the bus was not due to leave for the next 3hrs and since Srinagar and neighboring areas were reported to have returned to normalcy, we decided to take up his suggestion. The manager personally escorted Madhu to the taxi stand and helped us find seats on a Tata Sumo to Anantnag for Rs.50 each.

We were in Anantnag in less than 75minutes. The Sumo driver kindly dropped us off at the taxi stand there and didn’t leave before we found another taxi that would take us to Srinagar; we were most grateful! However this cab waited around to find more passengers to share the ride with. To keep us comfortable during the wait the driver fetched us tea from a nearby stall Madhu and I couldn’t believe how thoughtful and warm these Kashmiris were!

When the cab eventually left Srinagar, it was filled to its capacity. We began chatting with a couple of Kashmiri men in the seats before us. One of them was a govt employee who lived and worked in Anantnag while the other was a young MBA student who had grown up in strife-ridden Srinagar. They talked about everything from travel, tourism and food in Kashmir to the current political situation. They rued the fact that in spite of the region’s spectacular natural beauty, not many tourists come here because of the political instability. They claimed that since the Indian govt squashed militancy in the 1990s, the area is not as volatile and dangerous as the media claims it to be. They assured us, quite passionately, that irrespective of what happens in the old city, no tourist will ever be harmed. They claimed that their fight, whatever is left of it, is against the Indian administration and had nothing to do with tourists, who would always be treated with utmost courtesy. Madhu and I agreed with most of what they had to say especially since we had met some of the most warm and welcoming people here in Kashmir. But what hit us hard was the fact that these men referred to India as a separate country and us as visitors, not as fellow countrymen.

As the SUV dropped us off near Srinagar’s Dal Gate and we waved our goodbyes to the 2 gentlemen, Madhu and I were both left wishing we had had more time to chat with them and understand why things are the way they are. We have fallen in love with Kashmir and would love to see this wonderful region prosper and grow past its current, turbulent situation.

2 Responses to Last day in Pahalgam