Okay, so we’ve had a very adventurous beginning to our trip to the famed (and controversial) Kashmir Valley. Yesterday, we started from Jammu at 8am, hoping to be in Srinagar by early evening. We were in high spirits and were happily enjoying the landscape, when our driver, Ashok, stopped by a temple to pay his respects. And when he came back to the car, he shocked us by saying that he had just heard that there is a strike in Srinagar!

The very name Srinagar conjures up images of both absolute beauty and absolute terror! This region is said to be one of the world’s prettiest and most enticing ever! However, ever since partition, there has been a constant struggle between the two countries over this piece of paradise. The Indian govt has somehow managed to reduce militancy in the area over the past few years and tourism, mainly domestic, has slowly been on the rise as well but there has always been some sort of tension in the air. In the summer of 2008, some minor issue caused the entire Kashmir valley to flare up and go on a strike for nearly 2 ½ months! No vehicular traffic was allowed in or out of the area, causing complete chaos for all visitors, not to mention the terror of being stuck in a volatile region. So when Ashok first told us about the strike we almost asked him to turn around immediately. However, we held our nerves and got him to ask around some more regarding the strike. We later learnt that the strike was called to protest the visit of Indian Prime Minister, Mr. Manmohan Singh, who was scheduled to visit Srinagar the same day (such was our luck!); there was a good possibility that the strike would get called off once he left the following day.

Some 110kms northeast of Jammu, on the way to Srinagar, is a hilltop town called Patnitop. In summer months most Jammu visitors escape to Patnitop for its cooler climate. Ashok’s initial suggestion was that we hang out there for a few hours and then leave for Srinagar later in the afternoon. This would ensure that we get to town around 10pm or later in the night when the rules of the strike would be somewhat relaxed. Apparently, during strikes vehicles caught plying in the city could be subjected to stone-pelting and worse! We were appalled at his suggestion; there was no way we would sneak into a strife-ridden town that too in the middle of the night! Instead we told him that we would prefer to stay the night in Patnitop or Pahalgam (another pretty place along the way) and head to Srinagar only when the strike is called off. Between the two, Ashok felt that Patnitop was far better so Patnitop it was!

Situated a few kilometers off the highway, Patnitop is a very picturesque little village that has been completely usurped by domestic tourism. We loved the drive up to it and its fantastic landscape of Deodhar and Pine trees but were equally saddened to see ugly hotel structures and chaotic commercialization. The place was buzzing with Indian families, many of whom were also driven here like us due to the Srinagar problem. But many were there to spend a couple of days away from the heat of the plains. Ashok first took us to a local temple dedicated to Nag Devta (Snake God). It is said to be hundreds of years old. As we stepped out of the car, we were greeted by street-stall vendors who immediately started calling out to us, asking us to visit their stalls. Even though we politely declined, they badgered us continuously until we got to the temple. This was our first taste of Patnitop and it wasn’t good!

The temple stands in a circular compound in the middle of Patnitop’s lower market. It is a simple structure built traditionally of stone and wood with carvings of serpentine figures on the outside. People tied red bits of cloth to the stone screens outside the temple as a mark of their fulfilled or waiting-to-be fulfilled wishes. Unfortunately, no pictures were allowed. So we paid our respects, hung around for a few minutes and left!

Ashok then drove us a couple of kilometers uphill to where all the hotels are situated. Here we hunted 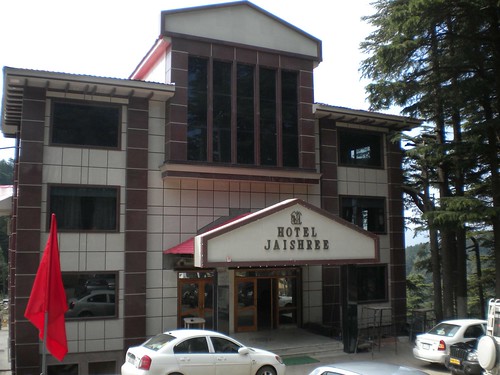 around for a decent place, found them all to be quite over-priced, old and poorly maintained (some were stinky!), and then finally settled on one called Hotel Jaishree. We dropped our bags in the room and then stepped out for lunch. Apart from the on-site restaurants offered by hotels and road-side Dhabas, there are no restaurants or cafes in Patnitop. So we picked a small dhaba a few meters from our hotel and ate there; it was an unremarkable meal!

Later in the evening Ashok offered to take us around to Patnitop’s ‘sights’. The first stop was a Children’s Park . It was a sloping meadow by the side of the road and was completely filled with families. It was a noisy, chaotic scene and we weren’t sure if we wanted to step in. But we eventually walked through it, weaving our way in between large groups and harassing vendors; we were in and out in less than 10 minutes! The next stop was also a park but this was nicer and larger. It was fringed with Deodhar trees and the grass was green and lush; very pretty! Children ran around while some people played badminton or cricket; others munched on snacks provided by Bhelpuri, Chaat and Butta vendors. It was a scene quite like any in a park anywhere in the world. If it weren’t for the noise level and the number of people around, we would have actually enjoyed the place.

Finally, Ashok brought us back to our hotel and pointed to a sloping meadow across from it. He said that if we followed the horse trail that went up the slope, we would get to an apple orchard and a viewpoint from where we could get excellent views of the mountains around. Happy to be on our feet again, we set off immediately. The meadow was right by JKTDC’s cottages, which we had not noticed before. They were spread over a green lawn surrounded by trees, overlooking the meadow; the setting was perfect! We wished we had seen these before and had at least checked them for availability.

The walk up the sloping meadow and into the wooded area beyond was quite nice. 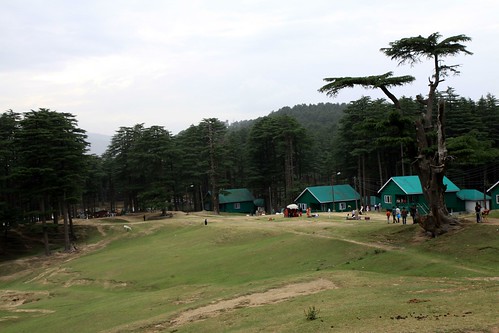 It was a short, uphill climb and along the way, we passed a private home with a grassy lawn and fruit trees in the front. It was protected by tall walls and a gate. Just beyond it, a few feet uphill, a couple of horsemen stood with their patrons, who were taking pictures and seemingly enjoying the view; this apparently was the ‘viewpoint’. When we got up there, we were disappointed to see that because of cloudy weather we couldn’t see any of the snow-clad mountains in the distance. And because of a thickly wooded forest, there wasn’t much of a view of anything below either! But the area was pretty and the walk up had been nice too, so we didn’t crib. We asked the horsemen regarding the apple orchard, wondering if it was further up the hill. They pointed to the private home we had passed and said that the apple orchard was within their property. While seated atop a horse, visitors can actually peek in and view it .

Later we spent some time in the meadow, sitting on the benches that had been thoughtfully provided. As the evening wore on, the crowds thinned and the place felt quite peaceful. We loved the greenery around us and realized that the landscape in this state was far prettier than that in Himachal. Here everything is far more green and lush, giving it an unbelievable feel.

The following day, Ashok took us to a place called Sanasar, which is about 20kms uphill from Patnitop. 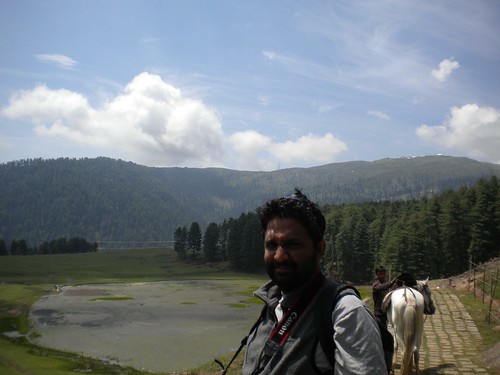 We weren’t very excited about the trip as we were sure it would be crowded and chaotic as well. But since Srinagar is still closed and there was nothing else to do in Patnitop, we went along. And I’m so glad we did! Just the drive up to Sanasar is absolutely gorgeous with green mountains and lush meadows everywhere we looked. Small streams flowed down from the mountain-side with homes of the nomadic tribe called Gujjar along them. Their mud homes had flat, turf roofs, which was quite strange and unique. According to Ashok, they live in the mountains tending to cattle during the summer months and then head down to the plains for the winter months.

Sanasar is a large meadow, quite like the one in Khajjiar but much prettier! It is fringed with Deodhar trees and has a small mass of moss-filled water in the middle. A couple of horsemen nagged us for almost twenty minutes after which we gave up and hopped on a couple of horses for a half an hour tour of the meadow. They took us to a small temple, again dedicated to Nag Devta and then beyond it to a large, grassy patch, which was unbelievably pretty! Here sheep and horses belonging to Gujjars grazed about lazily; it was a lovely scene. Green mountains surround the meadow, which sits like the base of a bowl between them. The horsemen took pictures of us and also let us hold and pet a newborn foal that was following his mother, the mare that I was sitting atop.

Later, after the horse ride we walked across the lower portion of the meadow, 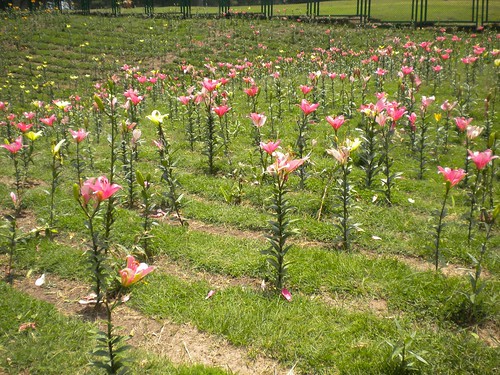 noticing that the govt had fenced in certain areas for flowering plants. Some of these were in bloom and were absolutely gorgeous! Here we also met my Shayna’s look-alike: a lovely, friendly golden-retriever-like dog with almost the same coat as Shayna . We found a shaded spot under a tree near the border of the meadow and sat there for nearly an hour enjoying the beauty before us. Thankfully, unlike Patnitop, Sanasar is not crowded and not terribly congested by street stalls, so we were able to enjoy it peacefully.

After a late lunch of Rajma Chawal at a dhaba next to the temple, we headed back to Patnitop and were back at around 4pm. In the evening Madhu enquired at the hotel’s reception desk and found that the Srinagar strike has now been called off. We had decided if things didn’t improve or worsened in Srinagar, we would ask Ashok to drop us back at Jammu. We would then change our route from Srinagar – Kargil – Leh – Manali to Kullu – Manali – Leh – Kargil – Leh. This would not only cost us in terms of both time and money, but it would also mean that we would have to drop Kashmir valley for good from our itinerary. This was a disappointing thought and Madhu and I had brooded about it all day. But now, thankfully, it looks like we will be able to see Srinagar after all. Ashok has warned us that the city is volatile and can have trouble any day or time, but we’ve decided to at least give it a shot! After all, we may probably never make it this far again in our lifetime¦