The old name of Gulmarg was “Gaurimarg”, named after Lord Shiva’s wife. Yousuf Shah Chak changed its name to Gulmarg (land of roses).

Meadows at the base of the hills

The peaks at an altitude of 3950 m can be accessed by ski lifts (Aerial Gondolas), which were inaugurated by the Chief Minister on 25 December, 2004. This is the highest cable car project in Asia.
Phase 1 : Gulmarg to Kungdoor – Cost INR 300
Phase 2 : Kungdoor to Aparwath – Cost INR 500

The entire hill is guarded by the army at all times.

Gulmarg has the highest green golf course in the world. There are a few places of religious importance within a 20 km radius including Baba Reshi, Haji Murad at Kreeri and Tangmarg.

It does not have any permanent residents. Everyone except for the hotel guests/employees are required to leave the village by sunset, due to a curfew imposed by the army in 1990.

Outside the Gondola stop

View from the Gondola stop 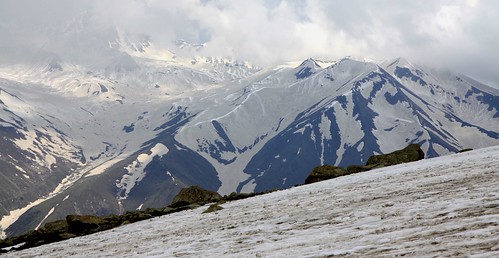