Considered among the holiest pilgrimage places by the Hindus, the Vaishno Devi Temple is near Katra in the state of Jammu & Kashmir. It is visited by over 8 million pilgrims every year and is the second most visited of the holy places in India after the Tirupati Venkateswara Temple in the Tirumala Hills in South India. The temple is dedicated to ‘Maa Vaishno Devi’, a manifestation of Goddess Durga the invincible, who is all-powerful and worshiped for her power.

The temple is located at an elevation of 5200 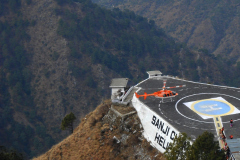 feet above sea level on the Trikuta Hills in the lower Himalayas. It is about 14 kilometers from Katra, the nearest town. Whiel Katra is connected by bus to Jammu from where flights and trains link to the rest of the country, the only way to access the temple is by trekking up the mountains. Helicopters take passengers from Katra to Sanjichhat, from where the rest of the journey has to be made on foot.

Inside the temple are the idols of three deities 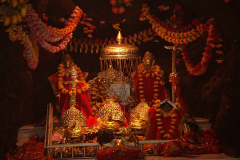 – Mahalakshmi, Mahakali and Mahasaraswati, all of whom are avatars of Goddess Durga. The sanctum sanctorum is located in a cave in the hills and could originally be accessed only through a long and narrow tunnel, but with the influx of pilgrims a new 200 meter long tunnel has also been constructed to allow for easy movement of the devotees. The original tunnel is open to pilgrims only during the low season or during festivals or rituals of the temple.

In earlier times, the pilgrimage to the temple took 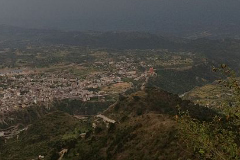 place entirely on foot from Jammu, covering a total distance of approximately 61 kilometers, which was extremely strenuous due to the high altitude and the challenging terrain. Nowadays, there are carts and ponies that ferry devotees from Katra to the temple. However, many pilgrims still prefer to undergo the hardship involved in trekking up the hills from Jammu as there are several other temples and holy sites along the way, such as the Shiva Goompha, Kalika Temple, Bhumika Temple and the Ban Ganga Temple, which has on its premises a spring of the holy river Ban Ganga.

Its location on the lower Himalayas makes the temperatures in Vaishno Devi quite cold for most parts of the year. In winter, temperatures drop to below 0°C. The rainy season also makes the terrain dangerous due to the possibility of floods and landslides. Weather-wise, the best time to visit the temple is during summer (May, June, July), while the dry months (February, March, September and October) are next best.

Many pilgrims like to visit the temple during the festivals, which are considered auspicious. However, it can get really crowded during these times. The Navratra festival (also known as the Vasant or Chaitra Navratri) in March-April is the most auspicious time to make the pilgrimage to the temple. The town of Katra is decorated for this festive occasion, and many cultural shows and events are organized during this period. The first three days of the nine day festival are devoted to worshiping Mahakali to remove impurities or obstacles. The second three days are focused on Mahalakshmi, with the belief that she will bestow her worshipers with wealth, while the final three days are reserved for worshiping Saraswati, the Goddess of Wisdom.

For many tourists, especially those visiting from far off places in India or abroad, a tour of Vaishno Devi also presents the opportunity to explore the beauty of the mountains in and around the area. Among the popular places that can be visited along with Vaishno Devi is Patnitop, which is a hill resort on a plateau at a height of 2024 meters. Its wooded forests and lovely views of the surrounding mountainsides as well as the course the River Chenab makes it ideal for quiet walks and picnics for enjoying the landscape.

A visit to Vaishno Devi can be one of the most spiritual experiences for Hindus, and combined with visits to other temples in the neighbouring areas or just a quiet holiday enjoying the natural beauty of the mountains in and around the town of Katra it promises a memorable experience.